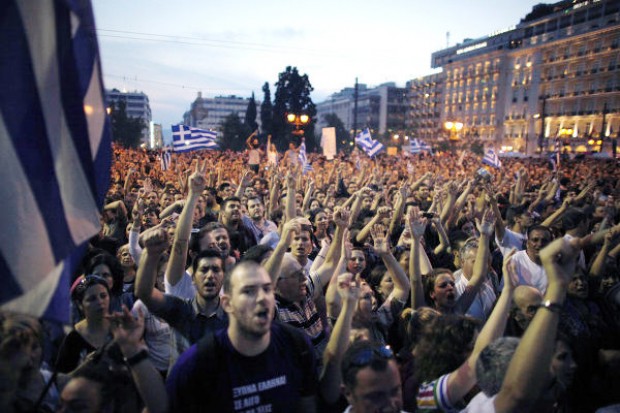 Nowadays the international financial and industrial associations have finished the process of repartition of world economy and have defined with spheres of influence. As a result, we can see the current events in Greece, Italy and Spain. Antiglobalistic, ecological and other organizations, sympathizing with our struggle against the dictatorship of the world capital, organized the mass protests in these countries and stated resoluteness of defending the interests of citizens in the future.

Nevertheless the traditional methods of struggle lose their efficiency because of unification of financial, industrial and regional political organizations. As a result, strengthening of exploitation and robbery of wide social mass goes on under the mask of pseudo-democracy.

By means of financial tools, these organizations get power over the whole nations. They permit themselves to carry out revolutions, economic crises and defaults, turning handsome profits of this. In case of resistance to their power the independent governments are announced as antidemocratic one. Accordingly, in such cases campaigns of political pressure on sovereign & independent states are organized.

On purpose to organize the political protests financial and industrial associations actively use the authoritative groups in European Parliament. As example European Peoples Party serves. The leaders of EPP and the majority of MEPs represent not the interests of Europeans, but the international oligarchy, both financial and commercial. They protect not our values, as they declare, but economic welfare of their partners. The statements about the working places increase, which the members of the EPP make, are just empty demagogy, so nothing more. In reality, their activities especially legislation is a direct method of turning super-profits. The governments and politicians, who try to resist their regime and their plans, are declared illegal, illegitimate and authoritarian. The corruption and bribery are widespread among the commissioners and the leaders of EPP.

However, situation on the borders of post-Soviet countries is much more menacing. Ukraine is a good example. This country is situated too close to the European Union. Economically it was one of the most powerful republics of USSR. Ukraine owns the great quantity of natural resources, it occupies favorable geopolitical position. Furthermore, Ukraine inherited developed industry from USSR. The main purpose of financial and economic associations is to own all these advantages. In the same time the young political partners inside the country play one of the main roles.

In high peak of world economic crisis IMF extended multi-billion credits to Ukraine. However, coming into Ukraine this money was directed to a rescue of private banks instead of the rescue of Ukrainian economy. So that money was transferred into Germany, Switzerland, the Netherlands, i.e. to their owners.

The Ukrainian economy became guarantor for such fantastic enrichment of international financial capital (at the cost of paying the credits by Ukrainians). The cynicism of such credit we can see in good example. The IMF lends to Ukraine money of the European and American taxpayers. This money goes in a pocket to the international bank organizations instead of Ukrainian teachers, doctors and pensioners. Thus the Ukrainians should repay the debts to the IMF.

In 2010 the team of pragmatic politicians and top-managers came to power in Ukraine. They know local economic realities very well. Their aim is to build the independent economic course. They established control for import dependence and for external financial activity. Such actions are the part of modern international political tendencies: for example, in France the President Francois Hollande has restricted the IMF influence on French government policy.

Because of these reasons Ukrainian government will undergo criticism of the European Union. Ukrainian government is accused of attempt to establish authoritative regime, antidemocratic actions, and oncoming of dictatorship and political repressions. But, as it was already noticed, the real reason of such informative pressure is politics directed on protection of national economy and restriction on power of international capital.

That is why its necessary to consider a possibility of political activity expansion of the left and antiglobalistic forces in a struggle against the international capital nowadays at the expense of inclusion of the post-Soviet countries in it.