In Peru, according to the 2018 Global Cancer Observatory (Globocan), 1,800 new cases of cancer are diagnosed in children each year.
Share 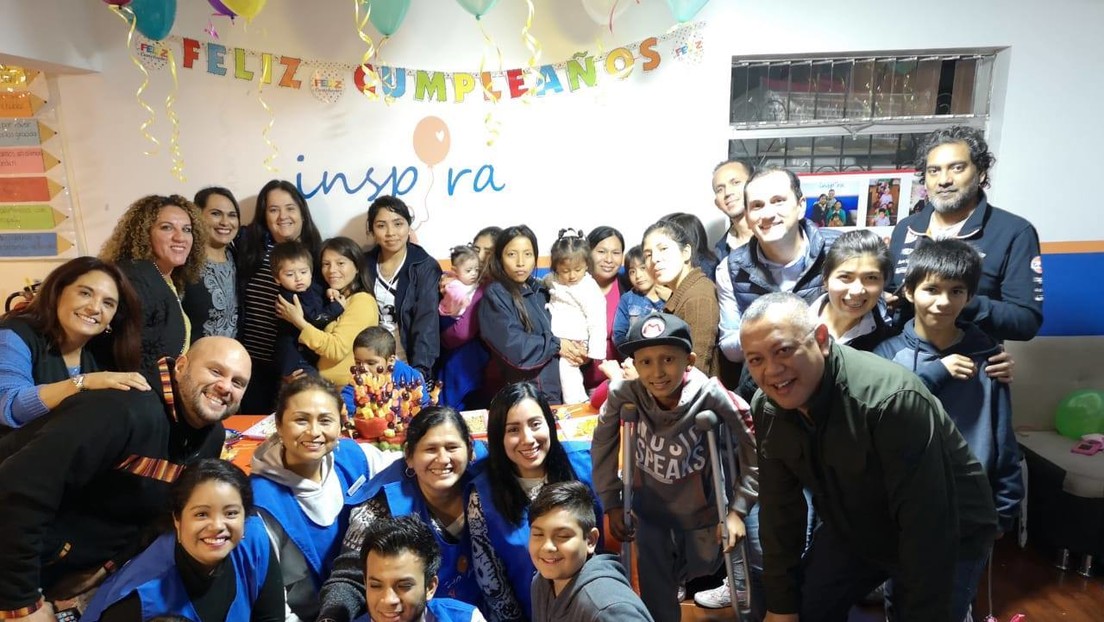 At the age of 8, Ricardo Pun Chong already knew that he was going to be a doctor, as did his father and his grandfather, both of Chinese origin. Born in Lima, Peru, he began studying medicine at 26, and graduated at 34. «From there, I started working as a doctor, but I felt that something was missing in my life», says this surgeon who now dedicates himself to natural medicine and homeopathy.

Catholic and dedicated, through the Church, to community action, he asked God to send him a sign to take the right path. One day, a girlfriend left him after a three months relationship and Ricardo felt very sad. It was then that a patient, seeing him so depressed, decided to take him on Christmas Eve to a shelter for cancer patients.

«That day I made a serious mistake. I went out to buy a lot of toys and groceries for the children. I spoke with a 14-year-old girl who was in bed, and I insisted that she come down to receive her gifts, but she told me that she had just been operated on. I asked her to come down six times, and she refused. So I asked her what her operation had been and she told me that she had had one leg amputated. Right there, I realized that my sadness did not make any sense», he recalls in dialogue with RT.

From that moment, Pun Chong began to get involved in the shelters in Lima, especially providing support to low-income families who come from the interior of the country to treat their children with cancer. “Many people come from different parts of Peru to the capital because there are no specialized hospitals outside of the capital. They sell everything they have, travel and sleep in the plazas, in the gardens, because they cannot maintain two houses. Here, in front of the hospital, a room costs 20 soles a night, that is, 5 dollars a day. It is impossible for such a long treatment, which usually lasts (the first stage) between six and eight months. Then, in the end, they stop the treatment and the child dies”, he explains.

This is how the Inspira shelter was born, the foundation created by Ricardo Pun Chong «with the sole intention that the treatments» of these children are not interrupted. In the establishment, they provide a house and food totally free to the child and the companion, who is usually the mother, for as long as necessary. And in the last period, they have also opened the doors for patients with other types of diseases or ailments, such as burns, cerebral palsy, or children with Down syndrome who have to undergo heart surgery, for example. Basically, people who need treatment for a long period of time. To all, they offer lodging, permanent games, and healthy meals.

The foundation was created in 2008, but it was not until the end of 2010 that they managed to rent the first suitable house to receive families. «From that date until today, we have never stopped, not even in the pandemic. More than 1,000 children have already passed through Inspira from different parts of Peru, including Venezuelan patients”, says the naturopathic doctor.

Depending on the therapy and the state of the disease, the little patients and their companions can stay a few months in the shelter. The longest a child has stayed was three years and eight months. «A bond is generated, but I try to make it clear that he is not my son, he is not my nephew and I will not be his godfather of any religion. We call them «wonderful friends». Probably, some will die before me. But they will always be my friends”, he says.

Ricardo does not have children and clarifies that he cannot consider his guests as if they were his children for a simple reason: «In 2014, we saw 14 children die, the highest number of deaths in a year. If they were my children, I wouldn’t be standing here talking to you”, he explains.

When one of those lives is turned off, it is a big blow to Ricardo and it also hits the entire workgroup hard, but the premise is always to keep going. «There are feelings of loss, but my team of volunteers and I, appreciate the great opportunity we have had to meet that child, to learn about his or her story and to have been able to help that child so that it does not have to sleep in a plaza, hungry, with hot or cold weather».

And he adds: «Of course a child’s death hurts us, but we need to stand up again because that bed is going to be occupied by another child, and it will need me, as a volunteer, to receive it with the same love that I gave the previous child».

How is Inspira financed in Peru?

The organization does not have the support of State entities, but it does have the support of some private companies and individuals that collaborate, although there are not many as what is needed. Ricardo Pun Chong argues that solidarity in Peru works in a particular way: «If I ask for $ 5,000 for a child’s prosthetic eyes, I will probably get it, due to the impact that his image may cause, or the mere idea of his suffering, which makes people think: ‘Poor little boy, who can’t see’. Now, if I ask for $ 5,000 to feed 40 children with cancer every day, I may not get the same help».

The founder of Inspira points out that to maintain the shelter, he needs an average of $ 6,000 per month, although that figure can sometimes be as high as $ 8,000. “Basically, I would need 6 companies that donate $ 1,000 each. Are there companies that could give that? Of course. Is there a company that can donate everything? Without a doubt. But I haven’t found them yet. The other option would be 6,000 friends who put a dollar each, the same that is spent on Netflix. But people don’t donate money, they may prefer to donate toys or clothes. Unfortunately, I do not pay for services with that», maintains Pun Chong.

Many people work at the Inspira foundation, but only three receive a salary, says the interviewee: the accountant, the manager and an administrator. As for the volunteers, there were more than 60 before the pandemic, and now they are down by half. «The coronavirus has been a big blow, both in health issues and economically – says Ricardo Pun – many have been left without work, relatives have died or even they have died ”.

The hostel has capacity for 40 people, but due to the covid-19 protocol, at the moment, there are only 20 beds occupied. The sanitary regulations have not allowed, in all this time, to carry out charitable actions that used to help finance the shelter, such as recitals, walks or collections like the one that was launched now: the Inspira 2021 Annual Raffle.

In 2018, Ricardo received a distinction from a news network, being chosen among more than 10,000 people from 194 countries as ‘Hero of the year’. The $ 100,000 he received as a prize was donated to start the construction of a new shelter, on a 680-square-meter plot of land. The property will triple the capacity to nearly 130 guests per day, he says.

In Peru, according to the 2018 Global Cancer Observatory (Globocan), 1,800 new cases of cancer are diagnosed in children each year.

At a regional level, it is estimated that at least 29,000 girls, boys and adolescents under 19 years of age will be affected by cancer, annually, in Latin America and the Caribbean, according to the Pan American Health Organization (PAHO). Of these, about 10,000 will die from this disease. It is also estimated that about 70% of cancer deaths are in low- and middle-income countries.

The latest numbers from the National Institute of Statistics and Informatics (INEI) of Peru, indicate that in 2020 monetary poverty affected 30.1% of the country’s population. Of this total, 45.7% belong to rural areas, while 26.0% live in urban areas.

These are figures that explain that there is a void, an absence, a lack of support for those families in Peru who are going through the illness of a child with pain, whose treatment is particularly expensive, in the least favorable conditions to face it, even more so in the context of a global economic crisis. Somehow, that «something» that Dr. Pen felt was missing in his life, was completed by his project. And the patients and their families not only recognize it, but many take his example in solidarity to action.

“There are very grateful people and there are others, who are also grateful but they believe that what we do is an obligation for us, or they think that this foundation is part of the State, or they imagine that I am making money with this. But later, they begin to realize that no, it is not like that. They realize that it is a matter of gratitude, of giving, of sharing. And many moms begin to help each other. They understand that this is the path that we are building and they extend a hand to the new guests».