Brazil, «The América strain» and «Corrupbol»: memes and criticism of the tournament approved by Bolsonaro in the middle of the third wave of covid-19

The decision of the South American Football Confederation (Conmebol) to remove the organization of the Copa América 2021 from Colombia and Argentina and grant it to Brazil, the country most affected in Latin America by the covid-19 pandemic, has been qualified on social networks as incongruous, contradictory and incomprehensible
Share 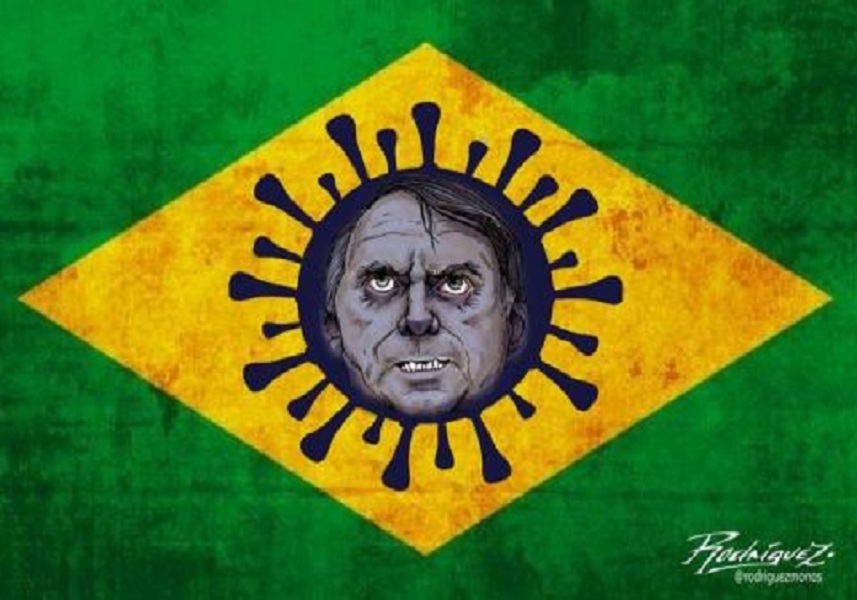 The decision of the South American Football Confederation (Conmebol) to remove the organization of the Copa América 2021 from Colombia and Argentina and grant it to Brazil, the country most affected in Latin America by the covid-19 pandemic, has been qualified on social networks as incongruous, contradictory and incomprehensible.

The measure has also caused controversy due to the growing political crisis of the government of Jair Bolsonaro, in a country that in recent days has registered massive protests to reject his management against the coronavirus, among other alleged irregularities.

The president of the Brazilian Workers’ Party, Gleisi Hoffman, who was one of the first to reject the organization of the event, described the president as «genocidal» and said that holding the tournament was «an act of madness».

Originally, Colombia and Argentina were to host the most important tournament on the continent at the level of national selections. However, Bogotá gave up the idea due to the political crisis, and Buenos Aires followed the same path due to the serious health situation it is experiencing.

This was precisely what drew attention throughout the region, since Brazil is not exempt from protests; It is the third country in the world with the most confirmed cases of covid-19, and the second with the most deaths worldwide. Currently, it averages more than 61,000 infections and exceeds 1,800 deaths per day, while new variants of the disease circulate in its territory, considered more virulent and lethal.

Immediately, the controversy moved to social networks. Some with anger, others with irony, the users not only referred to the contradictions that the determination reflects, but also accused the governing body of South American soccer of privileging monetary interests over life.

One of the most critical of this decision has been the Paraguayan national team ex-goalkeeper, José Luis Chilavert, who referred to the Confederation as «corrupbol» and stated that the national team players should stop being «treated like slaves» and «make themselves respected».

«We must rebel these corrupt people that do not care about the lives of all of you, united we will defeat the corruption that reigns in South American football», he said.

Another reaction against that decision came from Luiz Henrique Mandetta, who was Jair Bolsonaro’s Minister of Health between 2019 and 2020, and ended up dismissed due to the deep differences he had with the president in handling the pandemic.

«Brazil will host ‘Cova América’ «, declared Mandetta, who regretted that his country is lending itself to hold the event, just when the coronavirus is spreading, an action that he described as «incredible» and as «total cynicism».

In the comments, the ghosts of corruption that exploded in Conmebol have also emerged, which directly involved several of its members in a case of multimillion-dollar bribery that consisted of providing businessmen with broadcasting rights, advertising and sponsorship of tournaments, as well as the awarding of venues for championships.

In 2019, the Copa América started in the middle of a general strike against the reforms promoted by Bolsonaro and the scandal that involved the then Minister of Justice, Sergio Moro, due to doubts about his impartiality in the case he directed against the former president Luiz Inácio Lula da Silva.