Days ago the remains of at least 215 indigenous children who were students of the largest boarding school in Canada were found, a fact that has caused global outrage and especially of the original communities of the North American country, which demand that there be more searches for unnamed graves
Share 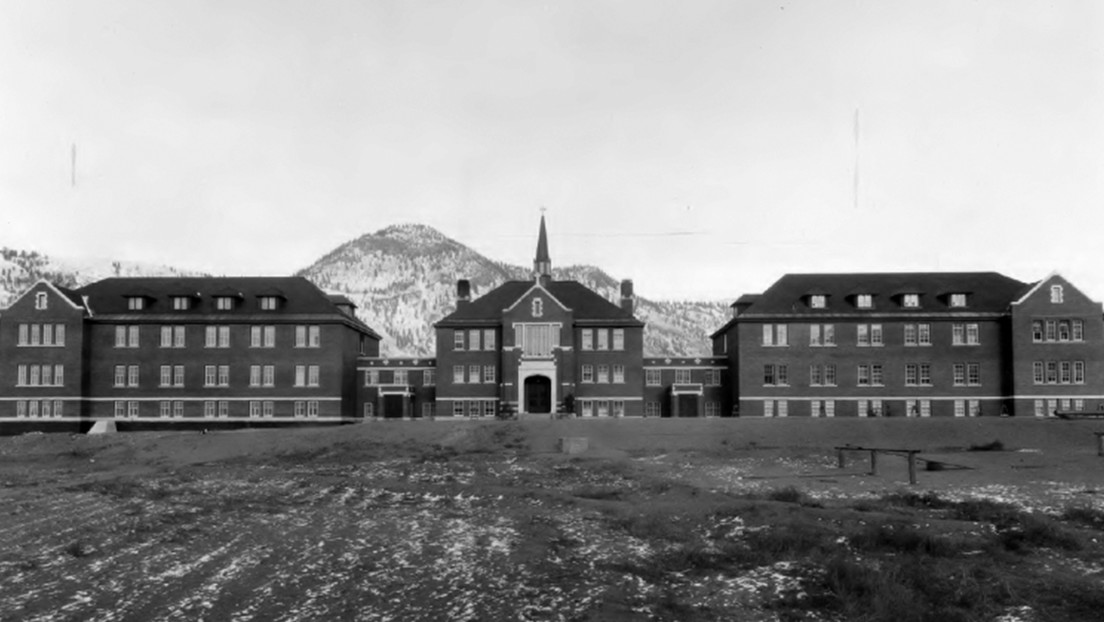 Days ago the remains of at least 215 indigenous children who were students of the largest boarding school in Canada were found, a fact that has caused global outrage and especially of the original communities of the North American country, which demand that there be more searches for unnamed graves. These findings have exposed the atrocities committed against thousands of indigenous children in those centers.

The announcement featured a small sample of an ongoing investigation by the Tk’emlúps te Secwépemc tribe into the deaths of students in Catholic boarding schools, government-run schools were part of the policy to assimilate indigenous children and destroy cultures and native languages.

In this regard, the Prime Minister of Canada, Justin Trudeau, commented last Friday on the discovery of the remains of the 215 students from the indigenous boarding school in Kamloops (British Columbia) and said in his speech that he still sees «a resistance from the Church» in acknowledging injustices. The president addressed the country’s Catholics, asking them to demand action by the Vatican, responsible for the management of the school from 1890 until its final closure in 1977.

«As a Catholic, I am deeply disappointed by the decision that the Catholic Church has made now and in recent years», Trudeau was quoted as saying by the State broadcaster CBC. “I think it will be a really important moment for all of us, particularly Catholics across the country, to reach out to our local parishes, reach out to bishops, cardinals and make it clear that we expect the Church to step forward and take responsibility for its role in this», he added.

The Holy See did not speak until Sunday, when Pope Francis spoke about the case. On Saturday the Supreme Pontiff had met with the two Canadian cardinals, Michael Czerny and Marc Ouellet. On the same day, the appointment of Ivan Jurkovic as Apostolic Nuncio to Canada was announced.

The Pope still does not offer an apology to Canada

Pope Francis on Sunday expressed his «sorrow» over the discovery of the remains of 215 indigenous students in a former boarding school in Canada run by the Catholic Church and urged religious and political authorities to commit to clarifying what happened. However, he did not offer the formal apology that many demanded.

The children’s remains were discovered at the Kamloops Indian School, located in the province of British Columbia. Considered the largest facility of this type in the country, it was operated by the Catholic Church between 1890 and 1969. It was definitively closed in 1977.

“I join the Canadian bishops and the entire Catholic Church in Canada in expressing my closeness to the Canadian people traumatized by the shocking news. May the political and religious authorities of Canada continue to collaborate with determination to shed light on that sad event and humbly commit themselves to a path of reconciliation and healing», said the pontiff during his weekly blessing in St. Peter’s Square, in which he prayed for the victims.

Francisco also made a strong call «to move away from the colonial model and ideological cultural colonization», but he did not offer the apologies that many in Canada were waiting for.

The Kamloops indigenous boarding school was not the only one, but it was the largest of the ‘schools’ of this type established in the country at the end of the 19th century, cites a RT dispatch.

The system was aimed at assimilating the indigenous people and make them to lose their native culture. According to the Canadian historian John S. Milloy, the aims of the program were similar to those of the American Richard Henry Platt, organizer of the Carlisle Indian Industrial School in Pennsylvania: «Kill the Indian to save the man». As a result, ‘school’ officials forced the disciples to forget their culture, language and even family, the final report of the Canadian Truth and Reconciliation Commission says the following:

“Once in the schools, the brothers and sisters were kept apart, and the government and churches even arranged marriages for the students after they finished their education. […] Government officials also insisted that children be discouraged, and often prohibited, from speaking their own languages».

The program was supported by several Christian congregations, including the Catholic Church, the Anglican, the United of Canada, and the Presbyterian, which in 1930-1931 managed 44, 21, 13 and 2 boarding schools, respectively. «The agreement of the churches gave a strong moral endorsement to this determined position», indicates Milloy.

In total, some 150,000 minors belonging to ethnic minorities were enrolled in such boarding schools nationwide. In 1931, about 37% of the minors from native peoples studied in these boarding schools.

At least 3,200 infants are estimated to have died in these institutions as a result of violence or neglect, although the exact number of victims remains unknown. It is also known that minors were subjected to physical and sexual abuse by the alleged pedagogues.

Most of the boarding schools were closed in the 1960s. Some were transferred to native towns who wanted to have their own schools.

For decades, indigenous activists drew attention to the historical trauma of Native peoples caused by the internship program.

The first organization involved to acknowledge its mistakes was the United Church of Canada, which apologized in 1986, for its part in the colonization, and specifically in running the ‘schools’, in 1998. It was followed by the Anglican Church, in 1993, and the Presbyterian, a year later.

In 1998, the Canadian government issued a declaration of reconciliation and in 2008, the country’s then Prime Minister, Stephen Harper, officially apologized. The same year, the Truth and Reconciliation Commission of Canada was created, which worked until 2015.

As for the Vatican, in 2009 Pope Benedict XVI issued a statement in which he «expressed his regret at the anguish caused by the deplorable conduct of some members of the Church», but did not explicitly apologize on behalf of the Holy See.

The issue was revived in 2017, when Trudeau demanded an apology. However, the following year Pope Francis informed Canadian parliamentarians, through the Canadian Conference of Catholic Bishops, that he was not going to ask for forgiveness.

What is known about the ‘missing’ in Canada?

The Truth and Reconciliation Commission (TRC) report, released in 2015, described the government-led policy as cultural genocide. In its 4,000 pages, it details radical failures in the care and safety of these children, with the complicity of the Church and the government, says BBC Mundo.

«Officials, the Church and schools were aware of these failures and their impact on the health of students», it said. The students were often housed in poorly constructed, poorly heated and unsanitary buildings, according to the report. Many lacked access to trained medical personnel and were subjected to harsh and often abusive punishments.

The CVR investigation found that thousands of indigenous children sent to boarding schools never returned home. The physical and sexual abuse led some to flee. Others died from illness or accidents amid negligence.

As early as 1945, the mortality rate for children in boarding schools was almost five times that of other Canadian students. “The survivors spoke of children who suddenly ‘disappeared’. Some spoke of children going missing in massive cemeteries», said TRC President Murray Sinclair in a statement on Wednesday.

He indicated that other survivors spoke of babies fathered by priests, taken from their mothers at birth and thrown into furnaces. In 2015, an estimated 6,000 children had died while in boarding schools. So far, more than 4,100 minors have been identified. «We know that there are many places similar to Kamloops that will come to light in the future», Sinclair said this week. «We have to start preparing for that».

What has been done?

In 2015, the CVR issued 94 recommendations, including six on missing children and cemeteries. Prime Minister Justin Trudeau promised to «fully implement» all of them.

– According to a count by public broadcaster CBC, 10 have been completed, 64 are in progress and 20 have not started.- The TRC, suspended in 2009, fought for the issue of clandestine cemeteries to be included in his mandate.- In 2019, the government allocated about $ 28 million over three years to develop and maintain a student death registry and establish an online registry of boarding school cemeteries.- So far, the National Center for Truth and Reconciliation says it has received only a fraction of that money.

This week, Trudeau said he was «appalled» by the legacy of Canada’s internees and promised «concrete action» but did not elaborate on many details. «Trudeau has been willing to move this forward, he has a lot of ‘talk’, but we really need to see action», Scott said.

He, along with Bellegarde and other indigenous leaders have lobbied the government for a thorough investigation of the 130 former internees to find graves with no names.

These children have been «discarded», Chief Bellegarde said. «That is not acceptable». News of the discovery has also sparked a global response, prompting pronouncements by the United Nations and Human Rights Watch.

The preliminary findings have also renewed demands for an apology from the Catholic Church, one of the recommendations in the CVR report. In 2017, Trudeau asked Pope Francis to apologize for the Church’s role in running Canada’s boarding schools, but the Vatican has declined to do so. Other churches issued formal apologies in the 1980s and 1990s.