Celac resurfaces and the OAS is dying? This is where the new Latin American process is heading to? 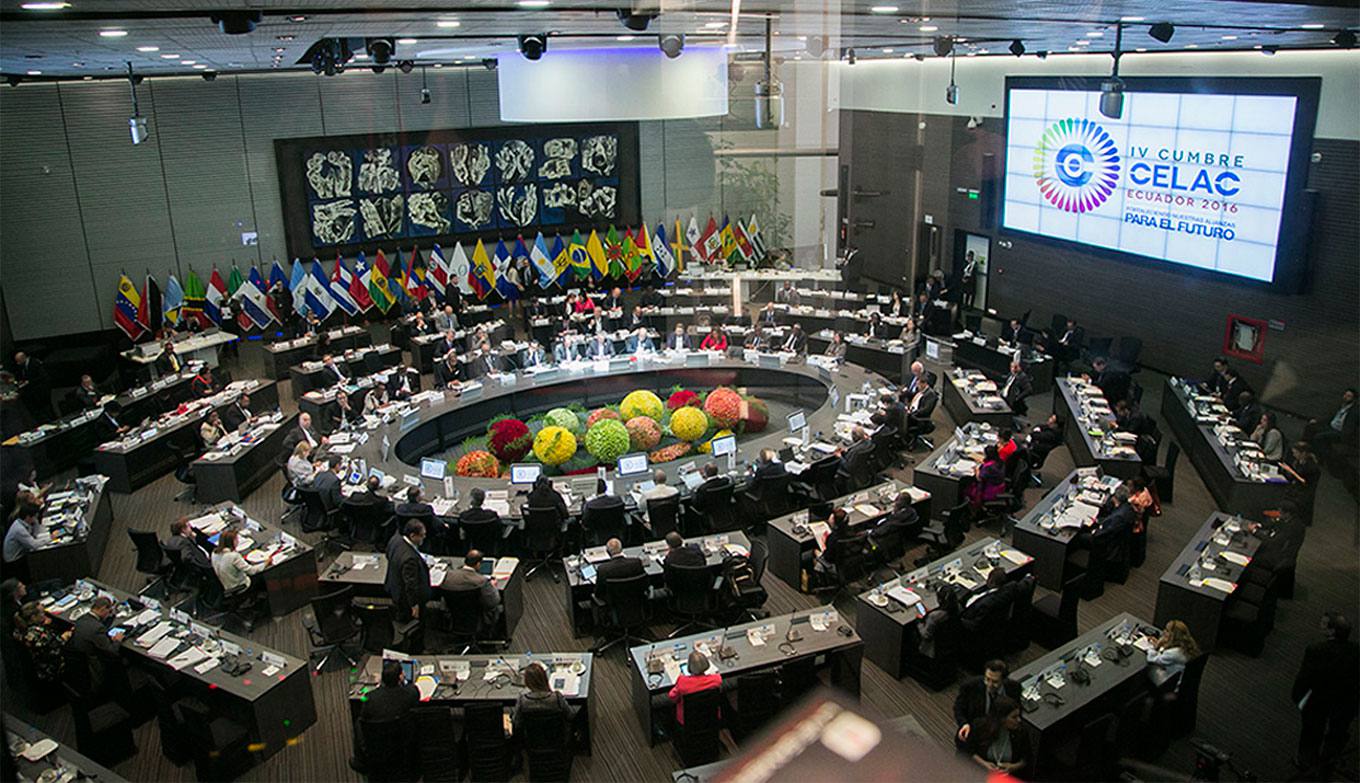 Last weekend, the president of Mexico, Andrés Manuel López Obrador, proposed creating a new Latin American integration project with an entity to replace the Organization of American States (OAS). This proposal generated reactions throughout the continent, who agree that the Mexican president seeks to politically strengthen the already founded Community of Latin American and Caribbean States (Celac).

The proposal, by López Obrador, would seek to counteract the hegemonic influence of the United States over Latin America. explains Manuel Hernández Borbolla, in a report for RT.

«The proposal is, neither more nor less, than to build something similar to the European Union, but attached to our history, our reality and our identities. In that spirit, the replacement of the OAS by a truly autonomous body should not be ruled out. Not a lackey of anyone, but a mediator at the request and acceptance of the parties in conflict, in matters of human rights and democracy», said López Obrador in a speech delivered on Saturday, July 24, during a ceremony commemorating the birth of Liberator Simón Bolívar, prior to a Celac meeting in Mexico City.

The statement came after months of confrontation between Mexican diplomacy and Luis Almagro, OAS Secretary General, who has been singled out by Latin American leaders for operating in favor of US interests in the region.
Although López Obrador did not explicitly mention the Celac, the speech was delivered on the occasion of the organization’s meeting held in Mexico, in the presence of diplomats who attended the meeting.

On the other hand, the Mexican president considered that the new proposed integration body should include the United States and Canada, but based on the recognition of the sovereignty of nations, instead of the attempts at coercion that have historically prevailed. Something that, according to López Obrador, would suit Washington in the face of China’s economic growth.

«It would be a serious mistake to face an opponent that we now is difficult to beat (meterse con Sansón a las patadas), but at the same time we have powerful reasons to assert our sovereignty and demonstrate with arguments, without slogans, that we are not a protectorate, a colony or its backyard», said the Mexican president.

Furthermore, he said, «China’s outsized growth has strengthened the view in the US that we should be seen as allies and not as distant neighbors».

The reactions at the Celac

Bolivian President Luis Arce supported the proposal of his Mexican counterpart. «We echo the words of our brother, López Obrador, in the idea of replacing the OAS with another truly autonomous body that expresses regional balances, respects the self-determination of the peoples and does not allow for the hegemony of a single State», Arce wrote.

For his part, the president of Venezuela, Nicolás Maduro, joined the proposal of the Mexican president and proposed strengthening the Celac as a substitute for the OAS. On the other hand, Colombia rejected the proposal, considering that regional integration should seek «closer» relations with the United States and Canada, in the words of the Colombian Foreign Minister, Marta Lucía Ramírez.

According to some versions published in the Argentine press, Mexico has initiated some political efforts in order for Argentina to assume the presidency of the Celac in 2022, so that Alberto Fernández will take the lead in counterbalancing the OAS.

According to analysts, this process of counterweights could even be reinforced with the recent electoral victory of the leftist Pedro Castillo in the presidential elections of Peru, which would help the effort to consolidate the Celac.

What is the Celac?

Celac is an organization created in 2011, mainly promoted by the late Venezuelan leader Hugo Chávez, and which brings together 33 countries in Latin America and the Caribbean, not including the US and Canada.

To understand its conformation, we must go back to 2005. That year, in Mar del Plata, Argentina, the IV Summit of the Americas was held, but at the same time, the Peoples’ Summit was held, which Chávez attended. . The Venezuelan leader pointed out that the objective of the meeting was to bury the Free Trade Area of the Americas (Alca), promoted by the US and Canada.

Then, he uttered his remembered «Alca, Alca, to hell!» and he also pointed out: «The peoples no longer accept presidents who surrender here, nor presidents kneeling in the face of imperialism. The people ask for true leaders».

Later, with the majority of progressive governments in the region, the Union of South American Nations (Unasur) was created, whose Constitutive Treaty was signed in 2008; but it was still pending to unite South America with Central America and the Caribbean.

In December 2008, the Latin America and Caribbean Summit on Integration and Development (CALC) was held in Salvador de Bahia, Brazil, an initiative of then Brazilian President Luiz Inácio Lula Da Silva, and it was the first time in 200 years that the representatives of the countries of the region were meeting without the US and Canada. There, they promoted regional integration and other meetings.

In February 2010, the Unity Summit was held in Rivera Maya, Cancun, Mexico; and, finally, in December 2011, in Caracas, Venezuela, the founding summit of the Celac was held.

In 2020, the administration of Brazilian President Jair Bolsonaro decided to temporarily withdraw from the Celac. However, the expectation of a possible triumph of the leftist Luiz Inácio Lula da Silva – who heads the main electoral preference polls in the 2022 Brazilian presidential elections – could give this regional entity a new impetus.

On the other hand, with the inauguration of the leftist Pedro Castillo in Peru, together with the presence of Arce in Bolivia, Maduro in Venezuela, Fernández in Argentina and López Obrador in Mexico, configures a scenario prone to promoting this integrating initiative of the region that, If it is resumed, it will have the challenge of negotiating with the most conservative governments, which are reluctant to these initiatives.

In the panorama, decisive actors have yet to be defined. In Chile, for example, presidential elections will be held in November 2021 (in the middle of a historic process for the creation of a new Constitution), while Colombia will do the same, in May 2022.

In this way, what happens in the internal politics of countries such as Brazil, Colombia and Chile, between 2021 and 2022, could be a crucial point to give political viability to López Obrador’s proposal, when creating a more multilateral organization, more equitable in the face of US interests on the continent.

Likewise, Argentina formally presented its candidacy to preside over the Celac from 2022, once Mexico concludes its term at the head of the organization.

China as the main partner

The experts consulted agree that the threat posed to the US by China’s economic growth, in addition to Mexico’s leadership, are key factors in promoting a new continental integration.

«You can now see how, from this government in Mexico, begins a relationship a little more marked with Latin America, something that the last neoliberal governments in Mexico put aside in order to integrate subordinately to the US and North America», says Aníbal García, researcher at the Latin American Strategic Center for Geopolitics (CELAG).

The specialist believes that a second «wave of progressive governments» in Latin America now allows «another type of integration, ‘outside’ of the US, in a slightly more autonomous way». A situation that is explained, to a large extent, because of the crisis of the neoliberal model in Latin America.

«So much has been accumulated to the detriment of the vast majority, that they no longer have the consensus that they had before and that is clear in the number of demonstrations that have taken place in various Latin American countries», he adds.

For his part, the researcher in international relations at the University of Guadalajara, Jesús López Almejo, believes that the OAS was never an American integration project, but rather an instrument to contain communism in the context of the Cold War.

For this reason, the expert considers it positive that the Mexican president has proposed the creation of a new regional body, which «guides the interests of the different participants towards a truly regional integration».

However, he warns that constituting a bloc without the US and pretending that Washington cooperates on equal terms is something «difficult» because, in his opinion, part of the success of the US policy has consisted in «weakening the different countries in order to dominate them and putting them at their service».