In La Guajira, Colombia, there are more than 16,000 children in danger of dying from malnutrition. This year almost 30 infants have died for this reason.
Share 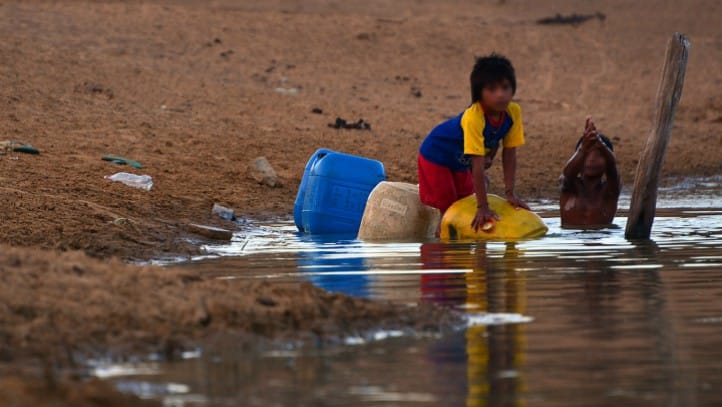 A total of 16,000 boys and girls are at risk of malnutrition or already suffer from it in La Guajira, a northeastern region of Colombia, according to data managed by the Colombian Institute of Family Welfare (ICBF).

Yaneris Cotes, director of the ICBF in La Guaijira, explained to Noticias Caracol that after an evaluation of some 84,000 children, between 0 and 5 years old, the institute was able to determine which population already suffers from malnutrition or is at risk of suffering it.

According to the same local media, the situation has also caused the death of 29 minors so far this year, due to causes associated with malnutrition in that department, where the indigenous Wayúu populations live, as well as the Kogi, Ika, Kankuamo and the Wiwa, reports RT.

Pilar Redondo, nutritionist at the Aporta tu granito Foundation in La Guajira, located in the Uribia municipality, commented that this year they have received 131 children with malnutrition, many of them serious and with «marasmus type signs, which is when the skin is stuck to the bones».

Liliana Fernández, a Wayúu mother who takes her daughter to this nutritional assistance center, was also consulted because she cannot produce enough money to provide food for the little girl. In addition, there is a shortage of drinking water and gasoline in the region.

Faced with the situation, the Guajira Resiste movement, an organization that has dedicated itself to denouncing the vulnerabilities suffered by this Colombian population, has declared a «hunger strike» and is holding a peaceful protest that was installed on Thursday in the Plaza Bolívar in Bogotá , the «political epicenter of decision-making in the country», for the Colombian State to take definitive action against «hunger and oblivion».

The seriousness of the situation in La Guajira was indicated by the Inter-American Commission on Human Rights (IACHR) in 2016, when it requested the Colombian State to adopt “necessary measures to preserve the life and personal integrity of the girls, boys and adolescents of the communities of Uribia, Manaure, Riohacha and Maicao of the Wayúu people, in the department of La Guajira”, because, at that time, 4,770 children died in a period of eight years.

In 2017, the Constitutional Court of Colombia found that in the department of La Guajira there was a “generalized, unjustified and disproportionate violation of the fundamental rights to water, food, food security and health of the boys and girls of the Wayúu people».

A judgment derived from the Court held that responsibility for these events rested with State agencies and institutions, such as the Presidency of the Republic and the ministries of health, housing, agriculture, as well as the Administrative Department of Social Prosperity, the Colombian Institute of Family Welfare, the National Superintendence of Health, the National Unit for Disaster Risk Management, the Department of La Guajira and the municipalities of Uribia, Manaure, Riohacha and Maicao.

For this reason, the Court ordered the presidency, by then in charge of Juan Manuel Santos, that in 48 hours it should «start or continue», as the case may be, an action plan to address the crisis. Failure to comply with the measure, those responsible would commit contempt of court of their State ‘responsibility’.

In August of this year, the Plenary Chamber of the Constitutional Court asked the Government of Iván Duque to explain the preventive measures that have been adopted in health matters to avoid the deaths of children in La Guajira, due to causes associated with malnutrition, in addition of other living conditions, such as poverty and marginalization.

The Court also asked the Government to explain why it affirmed that the deaths of minors had been reduced, if deaths still persist despite the time that has elapsed since judgment T-302 of 2017.

«One of the biggest problems in Colombia»

According to the report «Malnutrition in early childhood: Structural causes and preventable and avoidable violations», presented in mid-September by the Ombudsman’s Office, between 2017 and 2020, the National Institute of Health (INS) registered 54,693 girls and boys under five years of age, with acute malnutrition in Colombia, a situation that leaves «serious irreversible physical, psychological and cognitive consequences that affect their integral development».

«Child malnutrition is one of the biggest problems for early childhood in Colombia, and it has a negative impact on the possibilities of building a country with solid social, economic and cultural foundations. The solution passes through the articulation of the responsible actors and the understanding of the causes and consequences of this disease”, cites the Ombudsman’s report.

The study adds that poverty and social inequalities also «affect the survival of households where early childhood is concentrated» and affect, in a very grave manner, the accessibility to basic services, which means that the integral development of life and the effective exercise of fundamental human rights are truncated.

The groups most affected by food insecurity are those who live in «rural and dispersed areas», among them are women, who are the heads of households, indigenous peoples and Afro-descendant communities, who are also affected by unemployment, lack of opportunities and low levels of access to schooling.