Colombia: Esmad will continue to operate despite human rights violations

For the second time this year, a legislative project that sought to dismantle the Mobile Anti-Riot Squad (Esmad) in Colombia, accused of committing systematic human rights violations during anti-government protests, was shelved
Share 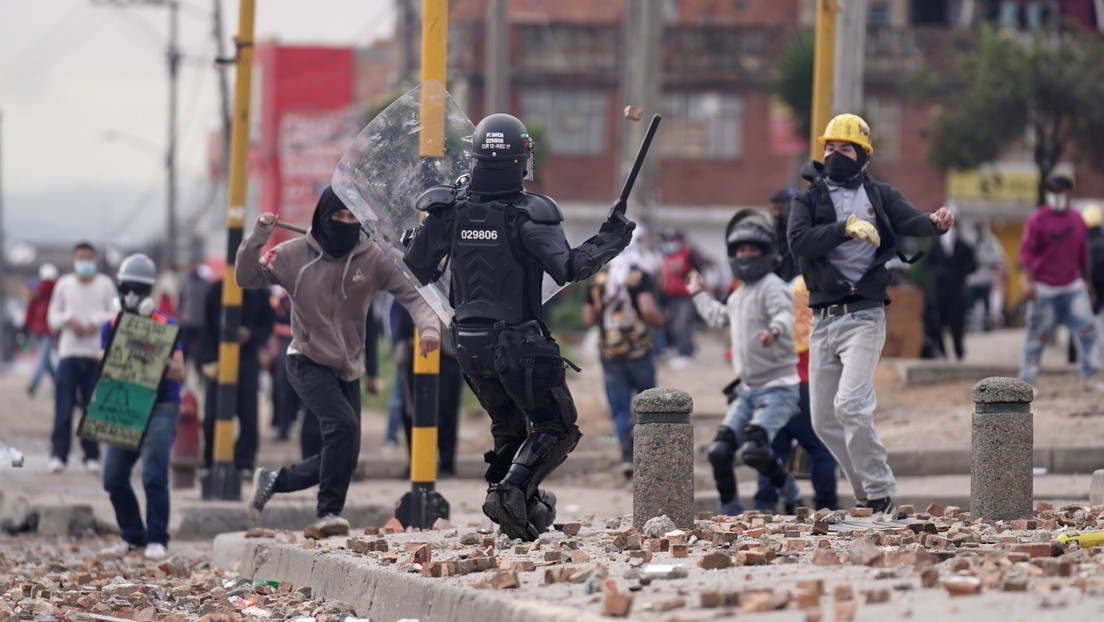 For the second time this year, a legislative project that sought to dismantle the Mobile Anti-Riot Squad (Esmad) in Colombia, accused of committing systematic human rights violations during anti-government protests, was shelved.

On this occasion, with seven votes in favor and three against, the Second Commission of the Colombian Senate overthrew the bill promoted by opposition senators Iván Cepeda, Antonio Sanguino and Feliciano Valencia. Last July, a group of parliamentarians had made a proposal to the House of Representatives to modify the National Police and prohibit the use of some weapons by the riot police, without success.

In his Twitter account, the senator of the Polo Democrático Alternativo (Alternative Democratic Pole) affirmed that although «this time it was not possible», he will persist. «We are going to dismantle the Esmad», he added.

Meanwhile, Sanguino, presidential candidate for the Alianza Verde (Green Alliance) political party, said in twitter that the elimination of the riot police, attached to the Ministry of Defense, «will have to wait for the new congress with democratic majorities». «A government and Congress of change in 2022 must advance reforms like these», added Sanguino.

What was the proposal?

In the draft of nine articles, it was proposed to dismantle the Esmad, created in 1999, within a period of six months, and that its duties would be fulfilled by the National Police, which would also absorb the riot control officers, explains journalist Nathali Gómez in a RT report. .

Agents who have criminal or disciplinary investigations for alleged human rights violations can not be allocated in responsibilities related to the containment of demonstrations.

This legislative initiative proposed to replace Esmad with a ‘Special Unit for Police Dialogue and Mediation’ that would give «a guarantee of the right to protest and human dignity, with a differential approach, that is to dialogue and conflict resolution», wrote Senator Valencia in twitter.

Why dismantle Esmad in Colombia?

Since the 2019 protests, the clamor has increased among opposition voices in the Senate and national and international organizations for the defense of human rights so that the action of the Esmad be reviewed and also to disintegrate the Esmad, in the face of multiple complaints of human rights violations in the mobilizations.

According to Cepeda, in his intervention before the Second Committee of the Senate, in the past protests, which began in April this year, anti-riot agents were responsible for 61 deaths of the 80 registered by human rights defense organizations.

«It is evident that the Esmad has serious problems in the way it functions and in its conception, superficial reforms are not enough, we see that there is a systematic behavior», said the opposition senator.

This year, the Inter-American Commission on Human Rights (IACHR), in its working visit to Colombia, asked to separate the Police and the Esmad from the Ministry of Defense to «guarantee a structure that consolidates and preserves security with a citizen and human rights advocacy approach». However, this call was rejected by the Colombian president, Iván Duque, who affirmed in twitter that no one could recommend that a country «be tolerant of criminal acts».

In this context, the president announced, in the middle of the year, the police «transformation» and «modernization» of the Ministry of Defense, amid requests for an end to police violence against protesters. This initiative was criticized at the time by those who called it a «cosmetic change» that did not solve the root of the problem caused by militarization and the «excessive use of force» during the protests.

This has not been the first clear indication by an international organization to the riot control unit and its measures in Colombia. In 2020, the United Nations High Commissioner for Human Rights (OHCHR) called for an «urgent» change of the Esmad, in the context of the anti-government mobilizations of 2019 and also of that year.

Cepeda recalled that in addition to the international recommendations on the Esmad, there are court decisions stating that «it exists because of a systematic conduct of human rights violations against people who have participated in mobilizations in a peaceful manner».

In September 2020, the Supreme Court issued a historic ruling whereby the Executive ordered a general restructuring of the use of force or the suspension of the use of 12 caliber shotguns, used by the Esmad to contain the protests, which would have been the cause of the death of the young Dilan Cruz, emblem of the demonstrations in Colombia.