Colombia registers 3,155 cases of police violence in protests against Duque

Since last April 28, when the national strike in Colombia began, 3,155 cases of police violence have been registered in mass protests that have generated a serious political crisis for the Government of President Iván Duque
Share 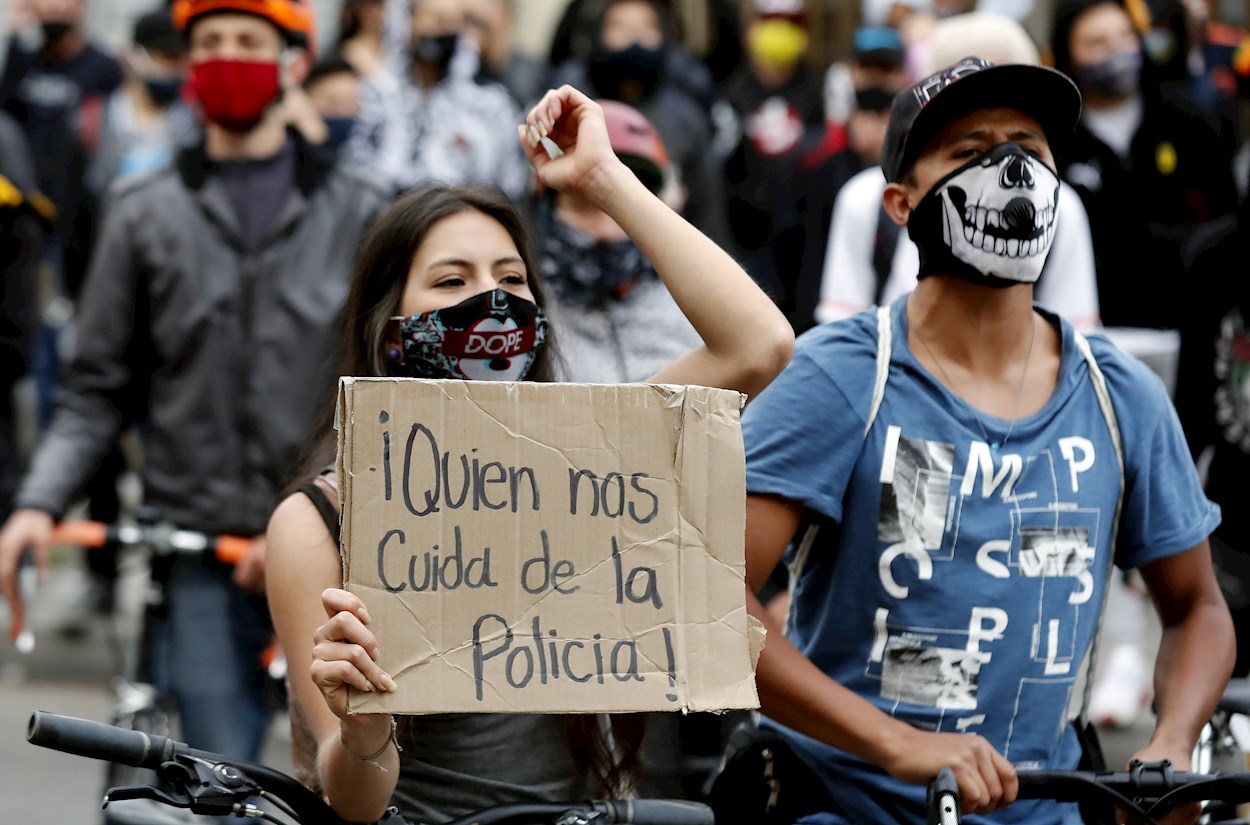 Since last April 28, when the national strike in Colombia began, 3,155 cases of police violence have been registered in mass protests that have generated a serious political crisis for the Government of President Iván Duque.

This is reported by Temblores, a human rights organization that has concentrated the complaints that do not cease, given that the security forces of the South American country continue to repress the protesters who take to the streets every day to demand a resounding change in the political system , explains a dispatch from RT.

According to reports, almost a month after the start of the strike, 955 people have been victims of physical violence, 22 of sexual violence and five of violence based on their gender.

One fact that should be highlighted is that, as what happened in the protests in Chile in 2019, in Colombia there are reports that the police are shooting directly in the eyes of the protesters. So far, 46 eye attacks have been confirmed, according to NGOs.

There are also 43 homicides reported, allegedly committed by members of the Security forces, 1,388 arbitrary arrests, 595 violent interventions in the context of peaceful protests and 165 cases of firearm shots.

More ‘missing’ in Colombia during protests

The death toll reported by the human rights organization coincides with that published by the Attorney General’s Office in its latest report, issued last Monday. However, the official institution assures that of the 43 deceased, only 17 «have a direct link in the framework of the protests», 19 «are not linked to the demonstrations» and the remaining seven are in the process of verification.

The Prosecutor’s Office also reports on the discovery of 290 people who had been reported as missing and continues the search for 129 more who are still missing.

Also, according to figures from this institution, 203 people have been charged during the protests, for crimes such as «homicide, violence against a public servant, damage to the property of others, obstruction of public roads», among others.

In its report, Temblores warned that, despite the multiple alarms set off by the media, and by movements and social and human rights organizations, both nationally and internationally, police repression and violence are persistent in Colombia.

“Taking into account the increase in complaints associated with police violence received in recent days, as well as irregular practices by the Public Force that we have been documenting and communicating in recent weeks, we express our concern and disagreement with the government’s decision to delay the verification visit of the IACHR in Colombia», said Temblores.

The argument that the Foreign Minister Marta Lucía Ramírez gave to postpone this visit of the IACHR is that the national control agencies should conclude the investigations of what happened in the protests, before receiving any international organization.

However, Temblores and other groups consider that, due to the urgency of the human rights crisis that the country is going through, the arrival of the IACHR should take place in parallel with the management of the Colombian entities.

«The IACHR’s visit does not represent a threat to the management of the control mechanisms. Rather, on the contrary, this would be a support and a way of guaranteeing that said investigations are carried out in compliance with international parameters of respect for human rights”, explained the social and the human rights organizations.

While the arrival of international missions is being debated, the protests are replicated daily throughout the country, either with musical preambles or performances to remember the victims of this historic stage of mobilizations in Colombia.

The first signs of repudiation of the roadblocks, which have become one of the main activities of the promoters of the strike, have also begun to take place.

The day before, for example, a March of Silence was held in Cali in which a crowd dressed in white clothes opted for dialogue and for the opening of roads that have hindered all economic activities.

The rejection of this form of protest was already evident in a survey by the consulting firm Invamer Poll, published on the site La Silla Vacía, and in which 60% of the people surveyed were against the blockades, while 98% endorsed the peaceful demonstrations.