Colombia: Why are 10 young people who led the protests against Duque considered «a danger to society» and sent to jail?

In the social networks, Internet users in Colombia have referred to the precarious situation of the young people who took to the streets to protest and the police violence against them
Share 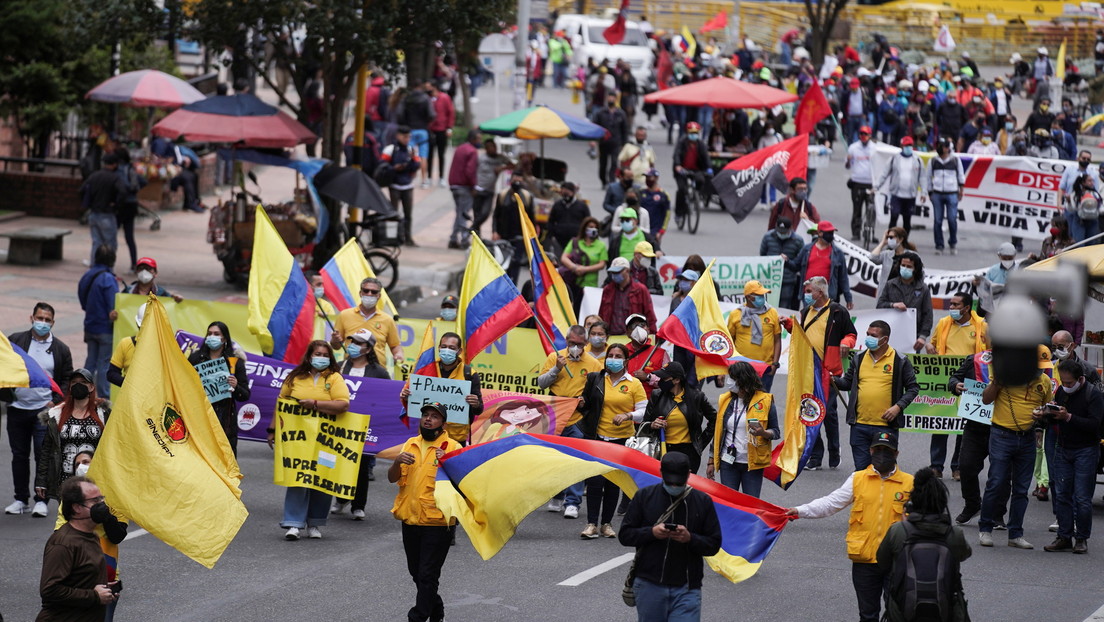 A total of 10 young people allegedly members of the ‘front line‘ (primera linea), as the vanguard of the anti-government demonstrations in Colombia has been called, were sent to jail accused of committing acts of vandalism, terrorism and attacks against the public force between May and August of this year.

The magistrate of the 69th Municipal Criminal Court of Bogotá with guarantees control functions, who took the decision virtually, considered that there are «material evidence and information legally compiled» to infer that the alleged protesters are involved in crimes of violence against public servants, instigation to commit a crime for terrorist purposes, throwing dangerous objects or substances and disturbance in the midst of collective, public or official transport.

According to the magistrate, those prosecuted «represent a danger to society» and cannot be ordered to house arrest because the events were planned from technological media and in various homes, explains the journalist Nathali Gómez in a report for RT.

While awaiting sentencing, the young men and women, who are between 20 and 30 years old, were sent to the Bogota Medium Security Jail and Penitentiary «La Modelo» and the Buen Pastor Women’s Prison, also in the capital.

How would they have committed the crimes?

The Prosecutor’s Office presented as evidence a series of messages sent through WhatsApp where, supposedly, the manufacture, transfer and use of incendiary bombs to attack the public forces in the mobilizations had been coordinated.

In the same way, those prosecuted would have agreed to systematically attack the uniformed men with incendiary elements, blunt objects and homemade weapons. In addition, they would have caused damage to public and private property.

According to the judge, the defendants had infiltrated the peaceful demonstrations to generate «anxiety» among those protesting.

The magistrate also directed harsh words against those prosecuted, whom she called «troublemakers, thugs, louts, brawlers and outlaws» who use social networks as a «sounding board» to give themselves «a false, absurd and cowardly publicity, brandishing as trophies the humble public servants».

What are the facts?

According to the Prosecutor’s Office, the first event that is part of this judicial decision occurred on May 28 in the vicinity of the Los Héroes Shopping Center, in the capital. There, alleged members of the «front line» would have caused damage to the infrastructure, threatening to cut the throat of one of the guards and attacking members of the Public Force using Molotov cocktails.

The rest of the events, which the Public Ministry recorded until August of this year, are attacks on policemen with homemade bombs and a fire on one of the buses of the Bogotá Urban Transportation System, where they also threatened the operator.

This decision, which has caused outrage in some users of the social networks, is described as excessive because they consider that justice was not applied with the same harshness against uniformed men and paramilitaries reported to attack the protesters. According to Senator Iván Cepeda, out of 80 murders during the national strike, 61 were linked to members of the controversial Mobile Anti-Riot Squad (Esmad).

From the beginning of the mobilizations, in April of this year, the Government labeled as ‘vandals’ and ‘terrorists’ those who participated in them. In some social organizations, it was stated that the State was «criminalizing» the protest, that these acts of violence were isolated and did not represent the spirit of the demonstrations against the economic measures of the Iván Duque Administration.

One of the most relevant cases was the expulsion from the country, amid death threats, of the German journalist Rebecca Linda Marlene Sprößer, who had accompanied and recorded the protests. The young woman also denounced the murder of her partner, who belonged to the ‘first line’ in Cali, in an attack from which she escaped unharmed.

In the social networks, Internet users in Colombia have referred to the precarious situation of the young people who took to the streets to protest and the police violence against them.