Colombia: Why is there a humanitarian crisis and thousands of displaced people in Ituango?

More than 3,000 people have been forced in recent days to leave the peasant and rural settlements of the municipality of Ituango, in the department of Antioquia, located in northern Colombia, to settle in the urban area of the town, due to the growing hostilities between the army, the police, paramilitary groups and guerrilla fronts
Share 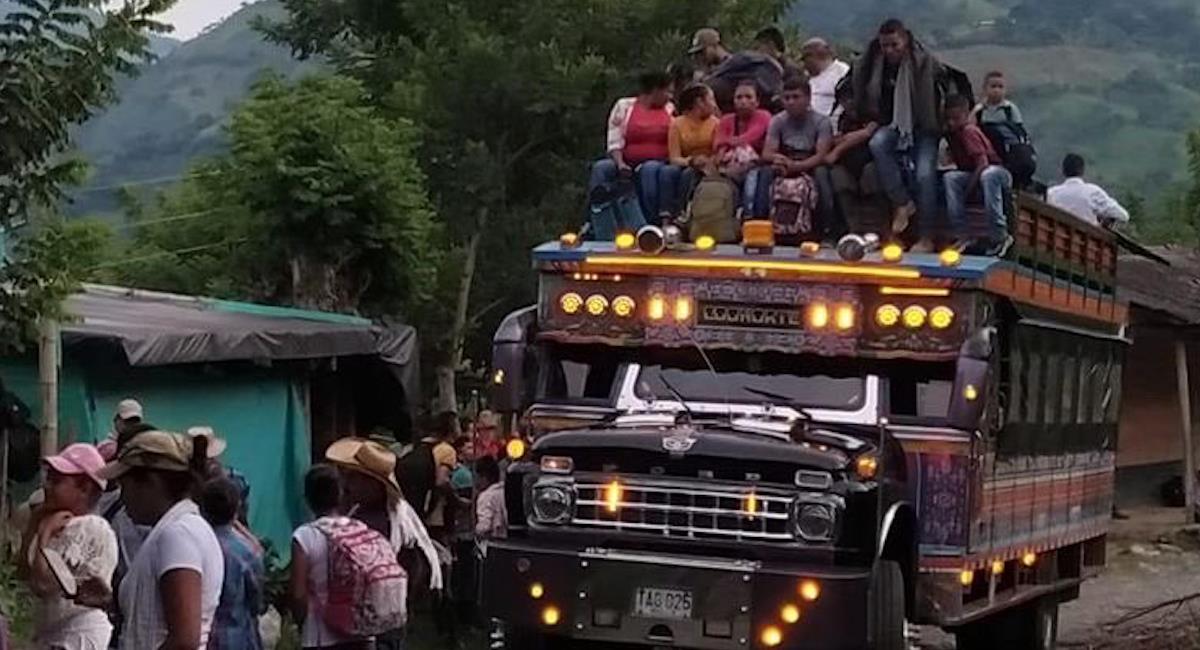 More than 3,000 people have been forced in recent days to leave the peasant and rural settlements of the municipality of Ituango, in the department of Antioquia, located in northern Colombia, to settle in the urban area of the town, due to the growing hostilities between the army, the police, paramilitary groups and guerrilla fronts.

The situation, which has coincided with heavy downpours in the area, set off the alarms of different social organizations that denounce the delicate humanitarian condition of the displaced, as well as the alleged inaction of the Colombian State and the Government of Iván Duque.

The mayor of Ituango, Mauricio Mira, told Radio Nacional de Colombia (RNC) that the «winter wave» that has been hitting the municipality for two weeks – known as the «agricultural emporium» – has caused «serious» damage to the infrastructure of a series of temporary shelters that had been established to serve the population displaced by the violence.

According to Mira, the displaced arrived from areas near Ituango, after being notified by «FARC dissidents» that a contingent of the «Army» and «paramilitary groups» of the Urabeños were about to arrive, to initiate confrontations that would threaten the peasants from the villages of Santa Lucía, Santa Bárbara, El Quindío, Alto del Limón, El Chuscal, Las Brisas, Quebrada del Medio, Los Sauces and Las Arañas.

The situation has been aggravated – Mira explained – by the heavy rains registered on Thursday, which damaged roofs, mats and blankets that had been given to the displaced. In addition, they affected several homes and a nursing home, leaving another 60 families affected.

«In the history of the municipality, it had never rained so hard. The weather issue is somewhat unpredictable, and this season has been difficult because we are supposed to be in the summer. In addition, all this is affecting us in the economic issue, as a result of the closure of roads due to the landslides», said Mira, who warned that in the next few hours more massive displacements could be generated due to the complexity of the conflict zone, as well as for the lack of fuel and resources.

What do political leaders and social organizations say?

This is the second time this year that a massive displacement has been recorded in that Colombian town, where a similar situation occurred between January and February. The region, which in the official propaganda is called the «Energy Capital of Colombia» because of the construction of the Hidroituango project, is also known for having rich lands for the production of coffee, sugarcane, corn, beans, yucca and plantain.

The director of Human Rights Watch, José Miguel Vivanco, urged the Colombian Executive to attend to the humanitarian situation by air.

For his part, the Governor of Antioquia, Luis Fernando Suárez Vélez, assured that actions have already been initiated to attend to the displacement «of some communities due to pressure from illegal groups», and that «the military and police presence» was reinforced to give response to the humanitarian emergency.

Omar Restrepo, a congressman from the Comunes party, warned that what is being experienced in Ituango «is a true exodus» that has left some «1500 people displaced».

“Nobody does anything to help these poor people. If Iván Duque does not care about the country, let’s make the world listen to us», said Restrepo in his message, which he accompanied with a video where dozens of affected people are seen fleeing in transport units.

Meanwhile, Yesid Zapata, a human rights defender from Antioquia, told RNC that the new displacements demonstrate «the systematic failure of the Colombian State to provide guarantees to the communities».

On Twitter, the Network of Social and Peasant Organizations of the North of Antioquia indicated that «since July 20, peasants from the Santa Lucia canyons in Ituango have been displaced», a situation that has occurred «after months of tense calm».

The social activist Isabel Zuleta denounced that the Mayor of Ituango «violates the rights of the communities», because it «neglects» and «tries to hide the reality». In addition, she argued that the Colombian Prosecutor’s Office allows «impunity for crimes against humanity» and that there is inaction from all government instances.

Mayor Mira, for his part, added that the situation has worsened because the municipality borders Bajo Cauca, Urabá Antioqueño and Córdoba. «This is why groups like the Urabeños, the Águilas Negras, the dissidents of the FARC and the ELN, are fighting for territorial control», he said.

Meanwhile, the Office of the Ombudsman of Colombia assured that it is verifying, in situ, the delivery of humanitarian aid by the Government of Antioquia and the Government Secretariat of Ituango, to the victims of displacement. In addition, he indicated that «a commission» is heading to the area to attend to «the human rights situation» of the affected communities.

Why is Ituango a zone in historical conflict in Colombia?

The region is inhabited by more than 20,000 people, including peasants and indigenous communities such as the Katíos and the Tuangos. In December 2020, the Special Jurisdiction for Peace (JEP) of Colombia indicated that 2,094 people were victims of forced disappearance in the area of influence of the Hidroituango hydroelectric plant, which is under construction in the department of Antioquia.

The JEP said in a statement that these people disappeared «in the municipalities of Briceño, Cáceres, Ituango, Nechí, Peque, Sabanalarga, Tarazá, Toledo and Valdivia». In addition, it pointed out that the «extremely serious crime was massive, widespread and persistent», and «undoubtedly greatly injured the communities».

The forced disappearances, details the JEP, have been carried out mainly by paramilitary groups, Bloque Mineros and Bloque Metro, fronts 18, 36 and 5 of the FARC dissidents, and by units of the public force.

The constant takeovers and confrontations between paramilitaries, guerrillas and the Army have made the area a cemetery of mass graves. The region has also been affected by the laying of antipersonnel mines and the introduction of illicit crops for the production of cocaine.

The strategic location of the municipality, conceived as a corridor that connects the Atlantic coast with the Urabá area, and which has an abundance of rivers and mountainous spaces, have made it a theater of military operations and territorial disputes.