The seizure of a Canadian oil field by a group of protesters in the Putumayo department, in southwestern Colombia, ended with a young peasant dead and several indigenous people injured
Share 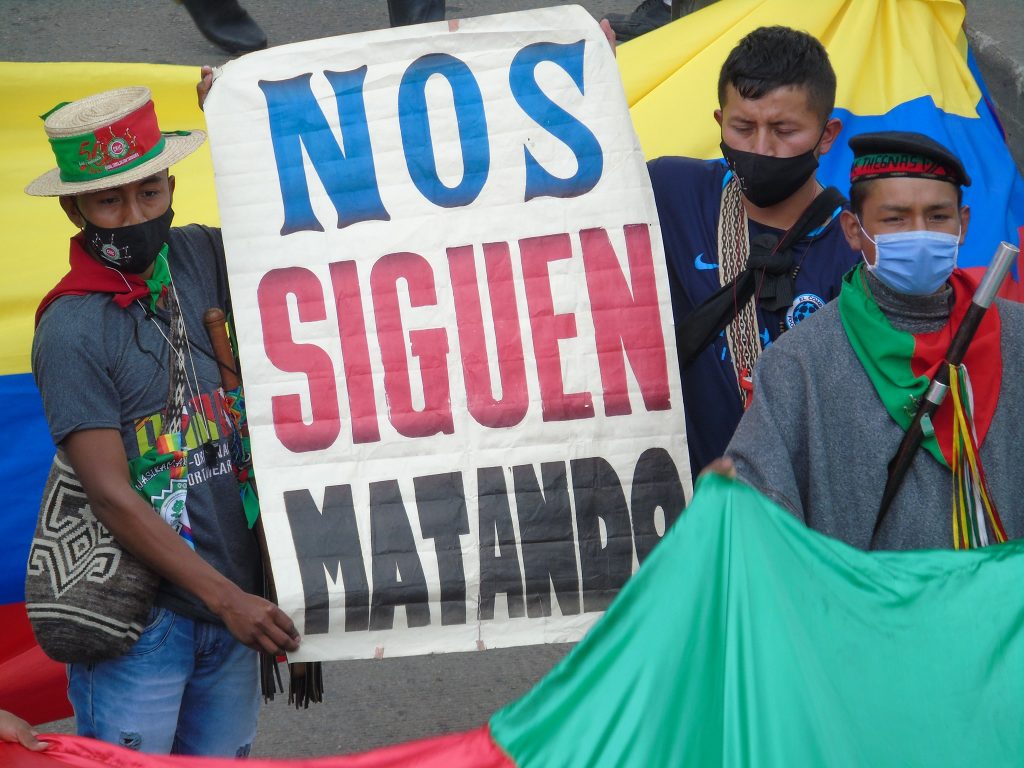 The seizure of a Canadian oil field by a group of protesters in the Putumayo department, in southwestern Colombia, ended with a young peasant dead and several indigenous people injured.

Yordany Rosero Estrella, 22, was wounded by a firearm, allegedly by the Anti-Narcotics Police, during a protest at the Costayaco 10 well of the Canadian oil company Gran Tierra Energy, in the municipality of Villagarzón. The young man arrived without vital signs at the hospital in the area, according to Radio Macondo.

His death was confirmed by the Indigenous Organization of Colombia (ONIC) in a statement, where they also demanded that President Iván Duque «stop the repression» exercised by the police, RT reported.

What happened this time in Colombia?

Early Monday morning, a group of community members from the «Villagarzón resistance point» decided to take over the well of the Canadian oil company in «solidarity» with those «who are being repressed in Cali and in other points of resistance in the country» and with those who died in protests, according to a letter from the Regional Unemployment Committee.

During the seizure, according to the text, there were «confrontations» between the security forces that protect the oil field and the protesters, which generated several injuries that were not serious until the middle of the morning. Among the injured is the leader of the Nasa people, Víctor Campo, who was transferred to the Villagarzón Hospital.

Amid the tensions in Colombia, which increased with the passing of the hours, the ‘takers’ met with organizations that defend human rights and with the governor of Putumayo, Álvaro Arturo Granja Buchelli, to reach an agreement.

However, faced with the demand of the demonstrators for the withdrawal of the Public Force from the area, the regional authority refused because it had to comply with the recently issued presidential decree 575, which ordered the «maximum military deployment» both in the department of Valle del Cauca, whose capital is Cali, the epicenter of the protests, as in Cauca, Nariño, Norte de Santander, Putumayo, Caquetá and Risaralda.

In the afternoon, while the parties in conflict were talking without reaching an agreement, the Anti-Narcotics Police, according to Radio Macondo, attacked the peasants and indigenous people, who were 300 meters from the meeting site, with tear gas and firearms. There, Rosero Estrella was injured.

In a video posted on the networks, opposition senator Aída Avella points out that shots were reported against peasants by the Public Force. In the scene you can see the presence of people crouching in the middle of a road while the detonations are heard. In another video, you can see where several protesters run, there is also a warning about police repression.

For his part, the Putumayo Police Commander, Francisco Gálvez Alemán, denied that the Anti-Narcotics Police were responsible.

Through a video, the official stated that the «unfortunate event in which a human being lost his life» occurred «distant» from where the uniformed men were, «according to the material probative elements, physical evidence and interviews» of the Prosecutor’s Office and the Technical Investigation Body.

According to Gálvez Alemán, there were no agents in the Costayaco 10 well. In addition, he made the firearms and police officers available to the investigative bodies to be interviewed in order to «clarify» what happened.

The protests in Colombia, which have already lasted more than a month, have left a balance of 48 deaths, according to the Prosecutor’s Office. Figures from Indepaz, however, bring to 71 the number of homicide victims in the framework of the strike, most of them allegedly perpetrated by agents of the Public Force.