Does Guaidó have ties to Juan Orlando Hernández and the Colombian cocaine in Honduras?

According to the data journalism platform La Tabla, the former Venezuelan deputy Juan Guaidó and his accomplices, in a seditious plan, continue to show their true colors and their links with international drug trafficking, this time with a considered «narco-president»
Share 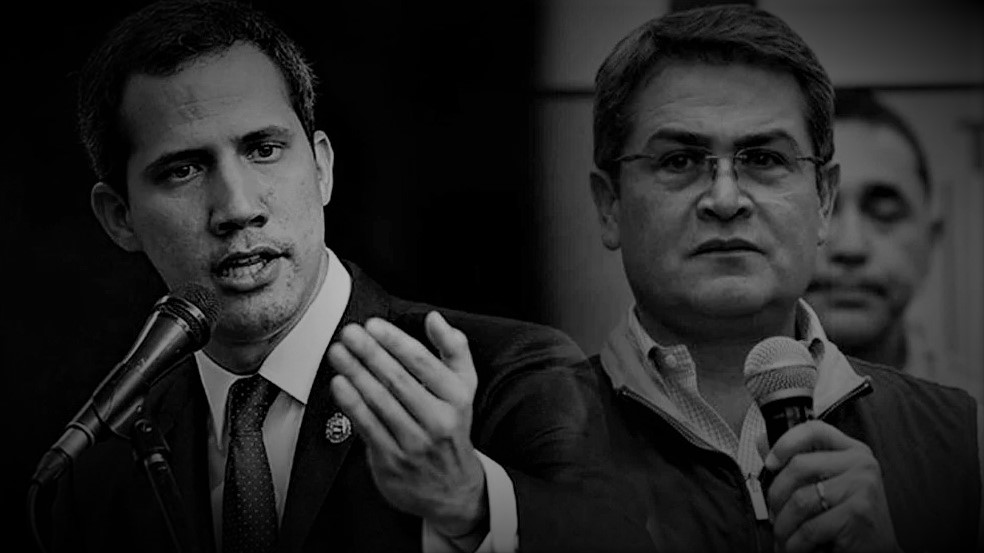 According to the data journalism platform La Tabla, the former Venezuelan deputy Juan Guaidó and his accomplices, in a seditious plan, continue to show their true colors and their links with international drug trafficking, this time with a considered «narco-president» .

The Venezuelan investigative media outlet says that the clan of Juan Guaidó and company would be involved with the international narco-paramilitary networks, especially the one that exists at the highest levels of Government in countries such as Colombia and Honduras; In other words, Guaidó is directly related – in addition to the Uribista narco-State of Iván Duque in Colombia – with the narco-government of the president of Honduras, Juan Orlando Hernández.

The link of the Guaidó farce with the narco-government of Honduras comes specifically from the lawyer Manuel Retureta, who appears as the signatory of the contract that Guaidó and Juan José Rendón -alias JJ- signed with the US mercenary contractor SilverCorp USA INC, a company directed by Jordan Goudreau , the same former marine and former bodyguard of ex-President Donald Trump. Goudreau confessed the plan they intended to carry out in Venezuela to kidnap and even assassinate -if necessary- the President of the Republic, Nicolás Maduro, and other members of the Public Powers of the Venezuelan State.

According to La Tabla, the drug trafficker Geovanny Fuentes was the one who personally paid the president of Honduras for providing protection and access to a drug laboratory; which is why the New York prosecutor Jacob Gutwillig accused Juan Orlando Hernández of collaborating with Colombian cocaine trafficking to the United States.
Prosecutor Gutwillig said that the drug trafficker (Fuentes) paid politicians, the military and even bribed the president, to whom he gave $ 25,000 in cash, to allow collaboration with the police, the armed forces and other Honduran politicians to transport the drugs freely through the country to the United States.

«The association of the capo with the (Honduran) president made him untouchable. He was part of the Honduran narco State», said the New York prosecutor, based on testimony from one of the accountants of Fuentes’ companies, used basically to launder dollars; and Leonel Rivera, who is the leader of the Honduran cartel Los Cachiros, currently in prison in the United States.

La Tabla adds that at the trial, photos of Fuentes ‘brother and son with President Hernández were shown, which were found on Fuentes’ phone. «Prosecutors consider Hernández a co-conspirator of Fuentes in the shipment of tons of drugs to the United States», says La Tabla.

Previously – La Tabla highlights – Tony Hernández, brother of President Juan Orlando Hernández, was found guilty of drug trafficking «on a large scale» in New York. This happened in October 2019. “His sentence is scheduled for March 23 and he can be sentenced to life imprisonment. The prosecutors claim that Tony was an intermediary between Fuentes and the Honduran president.

La Tabla indicated that during the trial of the brother of the president of Honduras, it was precisely Tony’s lawyer, Guaidó’s legal advisor, the lawyer Manuel Retureta.

«He was the advisor hired by the fantasy government of the Guaidó gang to draw up the contract with the gringo mercenaries of Jordan Goudreau’s SilverCorp USA company, who organized the paramilitary incursion from Colombia and who also confessed that the chief of the mercenary mission was Donald Trump himself, with the collaboration of the Colombian narco-State, including Iván Duque and his boss, Álvaro Uribe Vélez».

The Venezuelan investigative media adds that “on the other hand, J.J. Rendón and lawyer Retureta worked for the former president of Honduras, Porfirio Lobo, whose son is serving a sentence for drug trafficking in the United States. Rendón did it from 2007 to 2009. The criminal lawyer (Retureta) was accused by Lobo’s son of negligence after being sentenced to 24 years ”.