Haiti: What is known about the detainees after the magnicide of Jovenel Moïse?

Haiti remains in shock after the violent murder of its president, Jovenel Moïse, only two days ago, in the midst of the political and governance crisis that the country was already living
Share 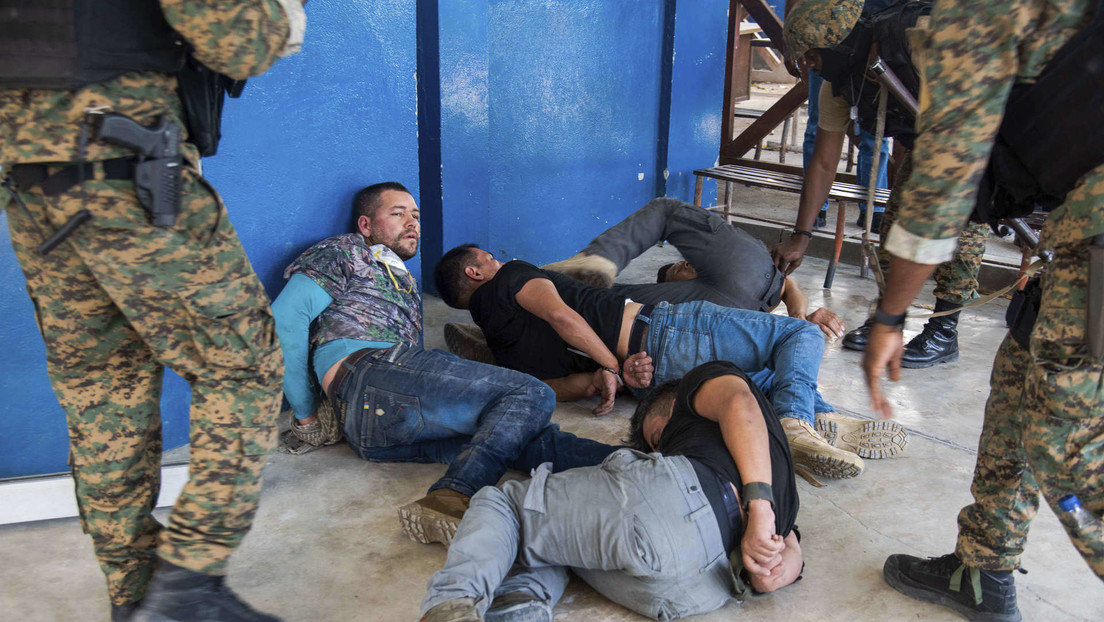 Haiti remains in shock after the violent murder of its president, Jovenel Moïse, only two days ago, in the midst of the political and governance crisis that the country was already living. The authorities have redoubled their efforts to capture those responsible for the magnicide, which occurred in the private residence of the president Moise on the dawn of last Wednesday. Moise was killed with twelve shots.

In these few days, it has been known that the action counted with the participation of an armed command of 28 foreign men. About this finding, which involves US and Colombian citizens, research has brought to light certain pieces necessary to know the reasons of an attack made with resources, planning and cruelty, said a report of Natali Gómez journalist for RT.

However, there is still important data that is unknown: Who are the intellectual authors of this criminal action? Why did the presidential security scheme fail? What interests are there behind the magnicide? What do they seek to generate in Haiti and in the region? So far, this is what has revealed the Haitian national police and the media outlets of that country and of Colombia:

How many people participated in Haiti’s attack?

The General Director of the National Police of Haiti, Léon Charles, informed at a press conference on Thursday night that the Armed Command was composed of 28 people, of which 26 were Colombians and two US citizens of Haitian origin.

Of these, and after two days of persecution, the police arrested 17 men (15 of Colombian nationality and the two US citizens of Haitian origin).

According to the figures contributed by the police, three other people were shot dead during the clashes with the authorities, of which two are Colombian, although previously, the interim prime minister of that country, Claude Joseph, had said that there were four deceased.

In a street of Pétion-Ville, a wealthy community of Port-au-Prince, the corpses of two men, presumably members of the Armed Command, were found. They were identified as Mauricio Javier Romeo Medina and Duberney Crador Giraldo, according to the Judge of Peace Substitute Clément Noël.

Another unidentified body was found in another street of the same  community. The alleged participant in the attack, wounded, went up to the roof of a house where he died bleeding, according to Judge Fidelito Dieudonné.

The police are still looking for the rest of the members of the command.

Who are the US detainees?

The two US citizens of Haitian origin are James Solages and Joseph Vincent. Both, said the authorities, were translators of the Colombians detained.

Apparently, Solages worked as a security guard of political opponents  Reginald Boulos, an entrepreneur who has been linked to the coups d’etat of 1991 and 2004, and of Dimitri Vorbe, vice president of the main electricity company in the country. On the latter, the president had insinuated that he could be behind the political actions against him, according to the Haitian Times.

Being asked by the authorities about who paid the mission, Solages said that «he found this work on the Internet», said Noël, who, without giving more detail, added that both detainees said that the «mission» they had, «consisted of stopping the president, as part of the execution of an order of an instructional judge, and not in killing him», informs Le Nouvelliste.

What will Washington do in Haiti?

The US will send high FBI officials and the Department of National Security to «support the Haitian people after the President’s murder», in response to a request from the Caribbean country, as reported by the White House press secretary, Jen Psaki.

What is known about the Colombians?

The General Director of the National Police in Colombia, General Jorge Luis Vargas Valencia, said this Friday that they have received information requirements about the 15 exmilitary Colombians detained.

Grosso Guarín, 41, would have arrived on Friday, June 4, to Punta Cana, in the Dominican Republic, and two days later he landed in Haiti, informed El Tiempo. In  social networks images of him have circulated in Dominican tourist areas. It was always made known that he was one of the best prepared military of the Colombian army until 2019.

Another ex member of the Colombian army, Uribe Ochoa, was submitted in 2019 to the Special Jurisdiction for Peace (JEP), a transitional justice mechanism emerged after the signing of the peace agreements. Ochoa was charged with the homicide of Luis Carlos Cárdenas, presented as an alleged extortioner during a security operation in Yarumal, Antioquia, in 2008. This would have been an operation of ‘false positive’ or extrajudicial executions of civilians by agents of the State.

What has the Government of Colombia said?

The Colombian authorities revealed this Friday that there had been two flights in which the alleged men, responsible for the murder of the President of Haiti, were mobilized. In addition, four companies are investigated that allegedly would be linked to the recruitment of the ‘retired’ military of the Colombian army.

Previously, the Minister of Defense of Colombia, Diego Molano, expressed in statements that INTERPOL requested information from the Colombian Government on the alleged men responsible for that criminal action. He admitted that some are members that have been ‘withdrawn’ from the Colombian army, so he instructed the military force and the police to provide «all the collaboration in the clarification of the president’s magnicide».

What still needs to be clarified?

Although it is still under investigation how the armed operation that ended Moïse’s life developed, there are some doubts that the authorities expect to clarify.

The first one is who ordered the magnicide. The police recognized that they have the material authors «in their hands», but that they still seek the intellectual authors.

Another one is why the security scheme (of the president) failed. For this reason, the Puerto Príncipe Prosecutor’s Office called to declare officials in charge of protecting Moise, including Dimitri Hérard and the Division Commissioner Jean Laguel Civil, the two heads of the security team, who are cited to declare on July 13 and 14 .

The central direction of the Judicial Police (DCPJ) will be responsible for questioning all security agents close to the President, said Bed-Ford Claude, Commissioner of the Government of Port-au-Prince.

What does Taiwan have to do with the mercenaries in Haiti?

The Taiwan Embassy confirmed, through a statement, that eleven of the alleged authors of the president’s murder were arrested at the enclosure of the diplomatic mission where they took refuge. It is not yet known if they are part of the group of 17 detainees.

Authorities are asking citizens not to take justice by their hand

The director of the police has asked the Haitian people, who has actively participated in the location of the alleged perpetrators of the magnicide, to not take justice by their own hand and to help the authorities in the searches they are carrying out

The statements occurred after some groups were demanding in front of the police station that they (the alleged perpetrators) should be  lynched, in the midst of the commotion that these criminal actions have caused in the Caribbean country.

In a video that has circulated in social networks, one of the captured, which apparently is Colombian, says, in the middle of a group of people, that he is a drug trafficker.

What were the findings?

In a vehicle that was used by the attackers the authorities found:

– Five firearms, including two pistols of 9 millimeters and cartridges of 5.56 millimeters.- The server of the surveillance camera of the president’s house.- A checkbook of the president.- Two dozen bags, wirecutters, axes, clothing and food.

– A bulletproof vest- Two plates of rented vehicles and the rental contract of a vehicle from July 6.- Mobile phones.- About $ 40.00 in cash.