Is the dialogue between the Petro government and the ELN in danger?

The setback due to a failed unilateral ceasefire has been followed by a change 'in the rules of the process' established in Mexico and a possible negotiation in Caracas. And now what?
Share 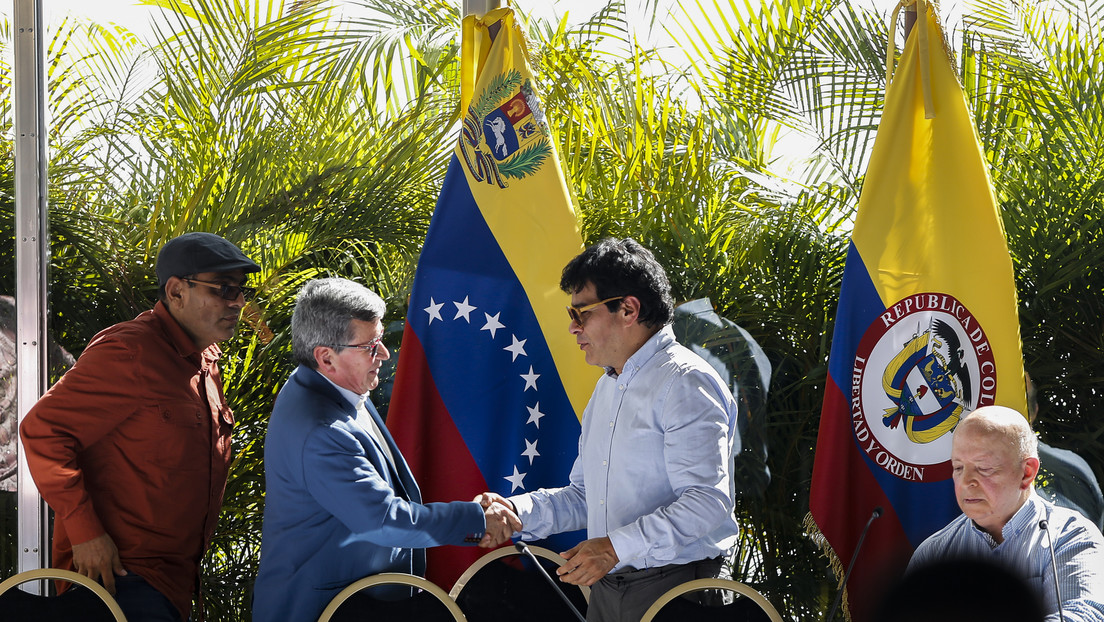 The trail of hope left by the progress of the peace talks in Caracas was left in suspense in Bogotá. In recent weeks, the misunderstanding over the failed bilateral ceasefire declared by the government of Gustavo Petro – and which included the guerrillas of the National Liberation Army (ELN) – put the word “crisis” on the negotiating table.

The problem is that the bilateral ceasefire, which according to the Petro government was a tacit assumption, has meant an ‘imposition’ for the guerrillas. Now, the measure must be openly negotiated in a new round of dialogues scheduled for January 23, reports RT.

«As the government does not comply with the discussion processes of the dialogue table and takes unilateral measures and makes them public, these procedures put the development of the table in crisis», wrote the ELN in a public statement.

The ELN’s denial of the measure announced by the Colombian government set off alarm bells about the continuity of the process, since the three decades of failed negotiations with that insurgent group are a precedent that weighs heavily when assessing the impact of each incident.

Although Petro’s negotiating team denies that there is a crisis and sees what happened as a «learning», the guerrillas hint at the tensions surrounding a possible pacification solution. The question that remains in the air is: what now?Change ‘in the rules of the process’ with the ELN

In December of last year, both parties agreed that the dialogue rounds would continue in Mexico. However, after the ‘impasse’ due to the announcement by the Colombian Executive, the Government of Andrés Manuel López Obrador reported «logistical» problems to carry out the meeting, scheduled for the end of this month.

Possibly the new stage of the rounds is, once again, Caracas. Petro’s untimely trip to the Venezuelan capital last weekend, coupled with the position of President Nicolás Maduro to act as a facilitator for the «bilateral ceasefire», could act positively in the meeting to take place at the emblematic Hotel Humboldt.

For the ELN, it is clear what will be the first point to be addressed at the next negotiating table: «It is necessary to deal with the latest events, to take the corrective measures that guarantee overcoming this crisis», they stated in an official statement.

Meanwhile, the head of the governmental peace negotiation team, Otty Patiño, insisted on Tuesday that the word «crisis» is inadequate to describe the status of the talks. «The table is in pause mode», he clarified in statements to BluRadio.

Patiño acknowledged that it is a «pause too long», for which he asked to «hurry up» the process even if it means not resuming the talks in Mexico, but opting for a faster alternative. However, he did not confirm if the next meeting point will be in Venezuela.

“They [the ELN negotiators] must be aware of this situation. The Government of Mexico has expressed the difficulties it has, so as to offer itself as a venue for that date».

The chief negotiator agrees that the urgency for the second cycle is a bilateral ceasefire, although the Petro government already issued a decree last week that allows it to resume combat operations against the ELN.

‘Ups and downs’ and stakes

The stumbling block between the Petro government and the guerrillas has not left the country’s political spokesmen indifferent. One of the first voices to come out in favor of continuing the talks has come from the Comunes party, founded after the peace agreement signed with the extinct Revolutionary Armed Forces of Colombia (FARC).

«It’s normal to have ‘ups and downs’. However, we do not consider that we should speak of a crisis. We invite the members of the ELN to continue to sit down at the dialogue table, to build the correct path towards the construction of peace. That what happened is only a lesson in the midst of this process of dialogue between the Government and them», declared Senator Sandra Ramírez.

From the opposition, the top leader of the Democratic Center (CD), Álvaro Uribe, spoke this week about the negotiations with the mediation of Venezuela, but let slip his insurmountable differences with the Maduro government.

«The Government of Venezuela can be effective so that the ELN, the guerrilla with which it now intends to negotiate, agrees to cease criminal actions», said the conservative politician, who became the main figure against the peace agreement with the FARC. .

However, he assured that the participation of Caracas could be «a danger to a final agreement that ends in submission», after discrediting the pact reached in 2016 with the FARC, stating that it was «unfulfillable» and only served for a «polarization without peace».

In the same ranks as Uribe, Senator Ciro Ramírez considered that the setback in the negotiations was «one more example of the clear improvisation and lack of coordination» of the Petro administration and its ‘total peace policy’, although he affirmed that what was required for the process to continue is «a real will of the ELN».

What has been achieved so far with the ELN?

The agreements reached between the Government of Petro and the ELN, so far, are four: the first establishes resuming the road map agreed upon during the administration of Juan Manuel Santos in 2016; the second agrees on the institutionalization of the dialogues; the third involves humanitarian actions for the population; and the fourth agrees on the pedagogy and communication strategies on the negotiation process.

Although it is not the first time that the guerrillas sit at a table to try to sign the end of arms, the expectations with Petro are higher because, in an unprecedented way, they are negotiating with a left-wing government.

The situation, although auspicious, is not without risks. For the director of the Peace and Reconciliation Foundation (Pares), León Valencia, the fact that the ELN uses the word «crisis» in the first obstacle of the talks, only intends to «dramatize more what has happened so as to take advantage of that negotiating table».

Petro’s mistake, according to what Valencia told Cambio magazine, was having stepped on the accelerator to declare a non-agreed bilateral cessation, for which reason the guerrillas would be «taking advantage» of that ‘error’ to charge him a higher bill than what corresponds.

But although history is full of obstacles that -in the last three decades- have cut short the pacification with the ELN, Petro’s position is to continue at the table to try to reach an agreement with the insurgent group that took up arms on the 4th. July 1964.

The substantial difference, at least on the political level, is that the direct promoter of the agreement is the president, a man who was a member of the first guerrilla group to put down their arms to believe in the vote, in 1990. For this reason, the interruption of the dialogues does not seem like the first option for the leader of the Historical Pact.

In the midst of uncertainty, the words of Colombian humorist Jaime Garzón, assassinated in 1999 by paramilitaries, resonate: “Every time a [peace] agreement has been interrupted, it has been worse: More deaths, more tragedy, more aggression from each side. You have to fight for peace and peace is ‘sit down and talk’, please sit down and talk».