Macario Colombo, the Venezuelan painter who has lived closed off from the world for more than 50 years because of his creative will

Macario's paintings express controversy, fantasy, myths, and philosophical views on life and death, with an accent on melancholy, terror, and drama.
Share 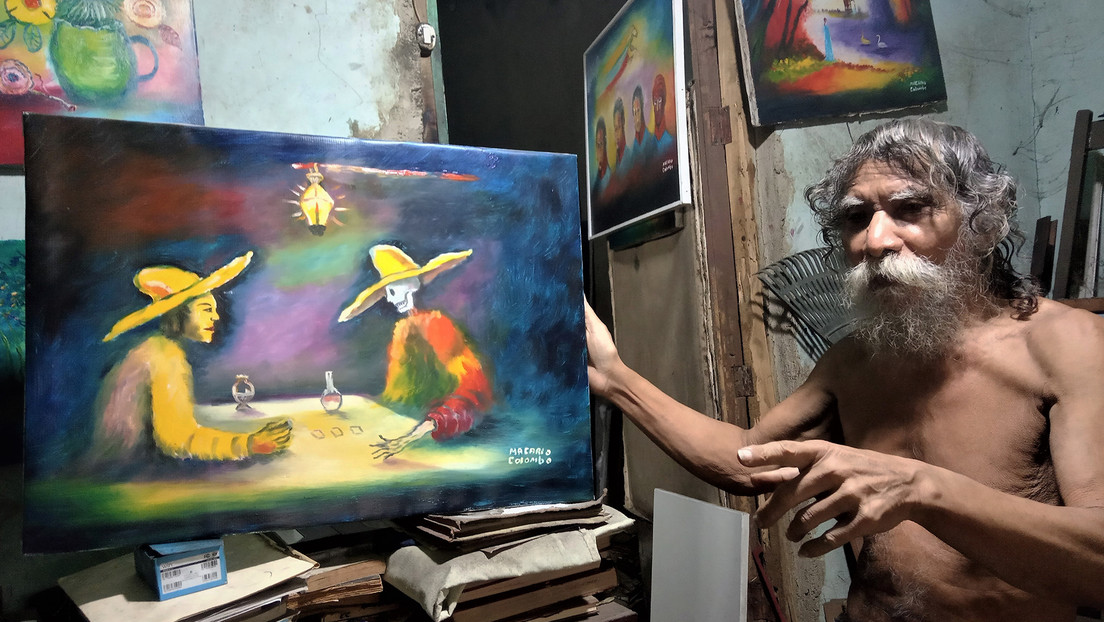 He has been ‘locked up’ (voluntarily) in his house for more than 50 years due to an internal need that makes him paint almost daily. His name is Macario Colombo Aldana, a Venezuelan creator born in the Sierra de Baragua of the Lara state, western Venezuela, who is characterized by showing a high-contrast work that has gained national and international recognition.

Macario’s art has managed to transcend Venezuelan borders and his works are found in countries such as Russia, Italy, Greece, Spain, Germany and the US Some collectors seek his pieces full of fantasies, myths, controversy and philosophical views on religion. Christianity, the origin of life and death, with a deep accent of melancholy, terror and drama.

RT traveled to Barquisimeto, known as the musical capital of Venezuela, in the Lara state, to learn about the history of this self-taught painter, his works and the particular lifestyle that he chose to live since 1970.

«I live by and for painting, without painting I think I would be nobody. I am Macario Colombo and they know me that way, because of what I have done with painting or what it has done for me», explains the artist who even makes the assembly of the paintings and the canvases.

Colombo was born on June 20, 1946. His parents were Susana del Carmen Colombo Aldana and Quirico Enrique Cordero. He says that he had a happy childhood despite poverty, since he was always able to play with full freedom.

His imagination allowed him to fully enjoy that stage of his life and it was at the age of 12 that he made his first painting: the facade of the house in front of his home in Baragua. «My brother told me to keep it because that house no longer exists. It was my first drawing and there began that need to paint, almost biological or pathological, that I carry inside of me».

Due to the need for the family to live better, Macario’s parents decided to leave Baragua, go through Carora and then settle in Barquisimeto. «We arrived here and since then I have been painting. At first. I had to work making musical instruments and that’s how we made a living, we were always poor».

«The thing about making instruments comes from the Aldana family, from old Luis Aldana and that is why my mother, who was the one in charge of the house, instilled in us to make musical instruments. I make mandolins, violins, ‘cuatros’, guitars and even harps. So, my dad learned from my mom and set up the workshop and the people from the Salón Mixto bought them from us, so that is how we faced poverty and how we earned enough for food», he says.

The confinement and painting

Macario says that at the beginning, for reasons of time, he was only dedicated to painting one day a week, on Sundays. However, the need to paint made him enter a creative whirlpool that locked him in his room to express everything that arose from his imagination.

«I felt that if I didn’t paint I was going to get sick. It was something that told me to paint, that I had to do it. That is like a kind of creative madness, the need for expression, that the hands draw what the mind imagines, sometimes from the dark, and that ends up on a canvas».

This is how Macario got lost in his imagination. «I stayed at home and my mother was the one who took my artwork out to the streets. She sold them or left them in a place to be sold. Many people even said that I was crazy and I do not blame them, it is difficult for them to understand».

«I also came to think at one point that I was going crazy, because it was so much inside my imagination and the paintings, that philosophizing I said: ‘Could it be that I have died and my spirit uses my body for this?’. For this reason, as I live ‘locked up’, I have to be active, that is what the psychologists recommend. I start to drain with painting, sculpture or instruments».

The stages of his work

Macario explains that his work has several stages, one of the «most beautiful, dark and dramatic» was the one that led him to make dozens of paintings focused on what he calls «The ghosts of the Baragua mill», a collection inspired by the myths that he heard when he was a child and that he transferred into images that impacted him during his childhood, when he lived in his hometown.

The other stage is about deities or Christianity. «I see Christ as a man who suffered, flesh and blood, not metaphysical. He was like us, not like that superior being or of the church. I see him as someone who lived, who felt pain, who was good, but people mistreated him and he became eternal».

«I have another more philosophical stage in which I propose that man comes from the fungus and that he goes through a metamorphosis until he becomes an adult, as we see ourselves, but he still has fungus on his sides because we are imperfect. Nobody is perfect, we all have something bad and something good, like life, which could not be life without death».

Macario says that his work has been praised by many and criticized by people who say it is worthless. «There are people who love me and people who don’t. There are many who have dedicated themselves to replicating my work, to copy it, violating my rights as a painter, and they sell them as if they were mine, they profit from it».

Regarding the sale of his paintings, the artist says that he is not interested in dealing with that matter. «I don’t like those things, nor do I like schedules. That annoys me. Painting is how I feel free. There are days when I haven’t painted and when night comes I get to work and I can paint till daybreak».

«They come here wanting to buy my paintings, but I’m not passionate about that, that’s why I live like this, with the fundamentals. What fills me and makes me happy is painting, I don’t know how to put a price on my paintings, that’s what my daughter does, who takes care of it, and what the collectors say».

Macario says that thinking about money poisons people and makes them greedy. «There are people who are lost by greed, not me, I am a happy man painting, who does not hurt anyone, who does not like violence, who believes that women are something wonderful and they are who give us life. This is how I see life, simple, sincere, without so much luxury and without lies».

He adds that his work is also full of love. «Sacred love is the one you have for your children, and that, in turn, comes from profane love, from the love that one had with a woman and a child came out of that love. There, both loves come together, that’s why the universe is made of love».

Macario comments that he was married and his ex-wife is still his friend «even though she fell in love with another man, a good one». With her, he had three children, two girls and a boy.

«The man died because he went astray, drugs and weapons. His death has been the greatest misfortune I have ever felt. I wanted to save him with painting, but he preferred ( going through the path of) the bad. He told me that I was a coward because I did not like violence and I replied that the best war was the one that did not take place, that the cemetery was full of brave men».

«My other daughter, the one who doesn’t sell, is the calmest. She always comes and visits me, she watches over me», says Macario, who believes that love for family is the most sacred love and to enjoy it, the best thing is always to be sober.

«That is why I am a teetotaler, to be aware of what I feel and do. I have never drank, smoked, or used drugs. A painter does not need these things, the mind and imagination are so powerful that when you let yourself go, the things that come out are very powerful and authentic».

«Hermeneutics is worth more to me»

As for the commercial value of his art, he says that will only be known when he dies. «As long as I live, there is envy, the ‘pointing out’, whether I studied or not, but there is my contribution to the world, my paintings are the ones that will speak for me and then, it will be seen how much they are worth. That money, millions or cents, I won’t even see it. Hermeneutics is worth more to me, what my painting makes those who observe it think and feel, that spiritual and sentimental value is priceless».

He remembers that one of the most difficult moments for him was when the Venezuelan economic crisis worsened and he was left without paintings and canvases. Back then, he had to turn to charcoal from the kitchen. «I had to draw with the soot from the pots. I scraped them with my fingers and painted on whatever I could find».

Colombo has been offered to leave Venezuela and settle in countries like Greece and Italy to show and sell his works, but he is not interested. He prefers the quiet calm of his house and eat a plate of beans with pasta and arepas.

For four hours, he also spoke about his other interests: the ambiguities of life, current political positions, the evil of Nazism and its lies, the vision of Buddhism, pacifism, the theft of his works by people linked to politics, classical music and his favorite poet, José Antonio Ramos Sucre.

Macario is grateful for the recognition they have given him in life, reflected in different film and television documentaries, interviews and a couple of books: «Macario the painter of madness», a scientific and sociological study written by Félix Pifano during 20 years; and «Painting as a means for freedom», by the author Luis Velásquez.

«I’m going to paint until I die, until my body allows it, that’s what gives me life and although I don’t want to die, because I really like life, I’m clear that that will happen one day».