Peru: Pedro Castillo is the president, and now what?

The Peruvian electoral authorities finally confirmed the victory of the leftist candidate Pedro Castillo and proclaimed him the president of Peru, after a tense wait of more than a month, that kept the country on the brink of a new political crisis since the second electoral round that took place on June 6
Share 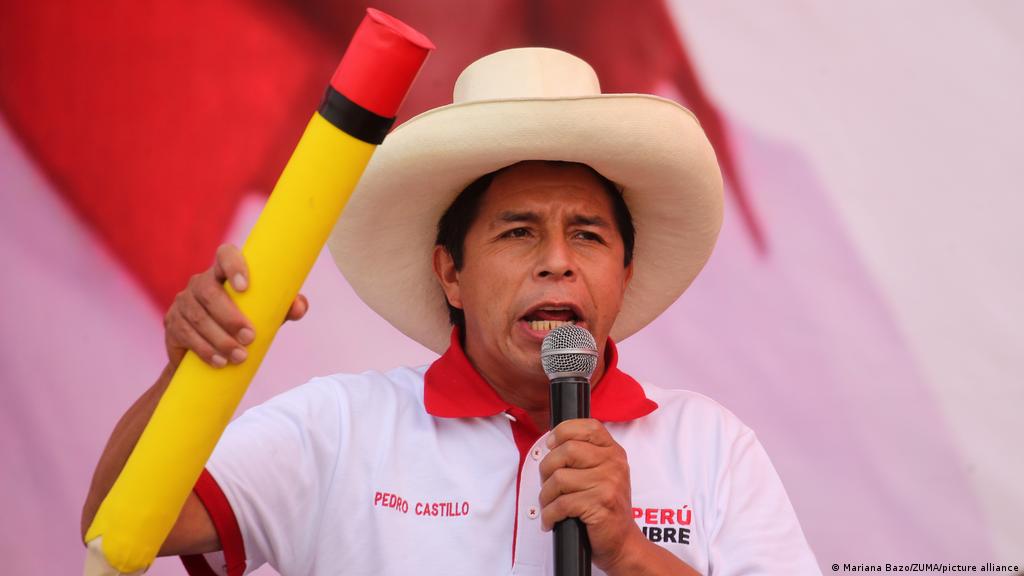 The Peruvian electoral authorities finally confirmed the victory of the leftist candidate Pedro Castillo and proclaimed him the president of Peru, after a tense wait of more than a month, that kept the country on the brink of a new political crisis since the second electoral round that took place on June 6.

The results were ratified in a virtual ceremony of the National Office of Electoral Processes (ONPE), headed by the president of the National Electoral Jury (JNE), Jorge Luis Salas Arenas and Castillo also joined the ceremonial event . The JNE proclaimed the winner of the Peru Libre presidential team, composed of Pedro Castillo as president and Dina Boluarte as first vice president.

«Thank you Peruvian people for this historic triumph! The time has come to call on all sectors of society to build together, in this Bicentennial, an inclusive Peru, a just Peru, a Free Peru», said the president-elect from his Twitter account.

Castillo advocated for a country «without discrimination and for rights and for all». And he summoned «the Afro, coastal, Andean and Amazonian peoples, the working class and their unions, the native and peasant communities and the entire society».

A very close result and a divided Peru

In a report by journalist Nathali Gómez for RT, she recalls that two weeks after the elections were held, the official results were known, but they were not decisive to speak of a winner. With 100% of the minutes scrutinized, the ONPE placed Castillo in first place with 50.125% of the votes, compared to the 49.875% obtained by Keiko Fujimori. The difference between the two was barely 44,000 votes.

The elections were held amid intense political polarization, after a turbulent four-year period, which was marked by the resignation of President Pedro Pablo Kuczynski, the removal of his successor, Martín Vizcarra, the brief presidential term of Manuel Merino – who left office pressured by popular protests—, and the current administration of Francisco Sagasti, who will have to hand over command to Castillo.

Although the ONPE figures were taken as a triumph of the leftist professor, who had the decisive support of the rural and impoverished areas located in the south of Peru, his arrival at the Government House (seat of power) was still flanked by a series of obstacles that had to be cleared by the Electoral Power.

The ghost of «fraud»

A day after the vote, the leader of the right-wing Fuerza Popular gave a press conference where she affirmed, without evidence to support it, that «irregularities» occurred in the countdown of votes and that Peru Libre was seeking to «distort» the results. With these reiterative accusations of alleged «fraud», the special electoral juries began the process of reviewing the records and tally sheets in the regions, and then passed the observations to the National Electoral Jury (JNE).

Until shortly before the proclamation, the electoral JNE was reviewing the appeals of the decisions of the electoral tribunals made by Fujimori’s team. In all the files it reviewed, it determined that there were no inconsistencies, which is why the «fraud» thesis was left without support.

On Monday, the National Jury of Elections (JNE) of Peru reported that it had declared «unanimously» the inadmissibility of the five appeals presented by Fujimori’s party, who hours later announced that it would recognize the results of the presidential elections, although it maintained its position. regarding a process that it considered «full of irregularities».

The delay that the review had, given the complaints of the former congresswoman, was considered by her opponents as a «post-election strategy» with a view to buying time and contributing to the uncertainty that exists in the South American country, which has gone through several political crises that reached their peak in 2019 when former President Vizcarra dissolved Congress, requested legislative elections for 2020 and that same year, was removed from office for «moral incapacity», amid an investigation by the Prosecutor’s Office for corruption.

The analysis of the results by the Electoral Power, which complied with the terms and regulations established in the country for this type of review, occurred in the middle of an unstable scenario that threatened the normal development of the process.

In that month, there was an unsuccessful attempt at preventive detention for Fujimori, protests by supporters of both candidates, the death in strange circumstances of a militant from Peru Libre and the scandal that unleashed several audios where Alberto Fujimori’s former adviser, Vladimiro Montesinos, spoke of conspiring and paying millionaire bribes so that the rightist leader, Keiko would be declared the winner.

There was also a call for a national strike to request speed in the proclamation of Castillo, given the alleged coup attempts encouraged by Fujimori in the company of Montesinos. In addition, another investigation was opened, related to the leader of Fuerza Popular  (Keiko)for allegedly capturing «assets of illicit origin» to finance her campaign this year.

A similar accusation was made against Castillo, who was linked by a Junín department prosecutor to the alleged irregular financing of his electoral campaign, which was denied by the professor, who stated that he would submit to an investigation if necessary.

The permanence in power of Castillo, who proposes a «socialist State», is an issue on which analysts have not yet drawn a definite line. On the horizon are several constitutional reforms that the Fujimori majority in Congress have accelerated, a month before their term ended, which could compromise his mandate.

Among the modifications that the Legislature is debating at full speed is the question of trust (a constitutional instrument of the Executive in which it asks Congress to support a policy), which would now be under the authority of Parliament to avoid its dissolution, as it already happened in 2019 ; the appointment of the new magistrates related to Fujimori of the Constitutional Court, which was provisionally suspended due to a judicial ruling; and the return to bicamerality, rejected in a referendum in 2018, which would be launched in 2023.

Regarding the new Congress, which will be installed on July 27, and which is characterized by a high level of fragmentation, experts have also suggested that the extreme right could advance measures such as a revocation or a constitutional indictment, a vote of no confidence or some other mechanism that seeks to weaken the Executive, which would pose the challenge of obtaining popular support to reverse these possibilities.

In addition to the reforms to the Magna Carta, in the near future there is the call for a referendum to call a Constituent Assembly, which was one of Castillo’s electoral promises. Until now, signatures have started to be collected to convene it and the leader of Peru Libre ratified that on July 28, the day on which he will take office, the first call to Parliament will be to «immediately» schedule its installation in order to «make with the people the first Constitution of the people».

The expectation about the ability to maneuver that the new president will have also touches the international arena and the impact that another government of a socialist nature would have on the region. In the last month, both the US and the European Union (EU) have classified the elections where Castillo won the victory as «free, fair, accessible and peaceful» and as a «model of democracy», for which they took distance from Fujimori and her accusations of «fraud».

However, it will be after his swearing in that the relationship between these countries with Peru will begin to be more clearly delineated.