Peru: what has happened one year after the oil spill in La Pampilla?

Repsol's La Pampilla refinery has been released from a million-dollar fine, in the midst of a conflict of interests after the spill
Share 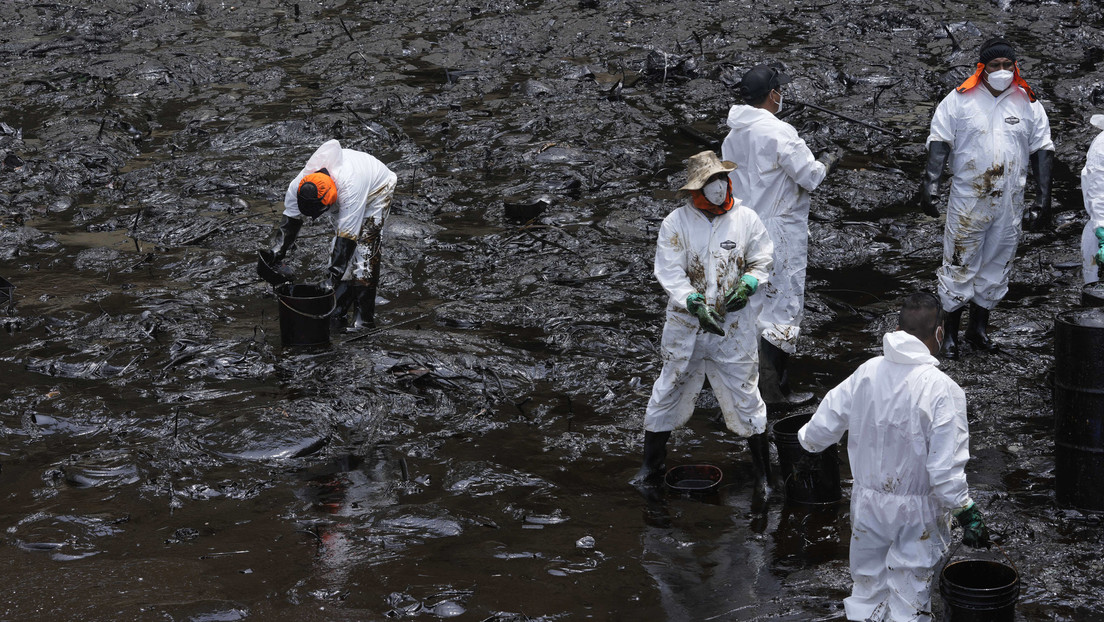 Nearly 12,000 barrels of oil are still left behind in the sea off the Peruvian coast after the spill a year ago, affecting two natural protected areas and 48 beaches in the districts of Ventanilla, Santa Rosa, Ancón, Aucallama, Chancay and Huacho.

The disaster, which occurred on January 15, 2022 during the unloading of crude oil from a ship at Terminal Multiboyas No. 2 of Repsol’s La Pampilla refinery, caused the death of thousands of fish, mammals and birds, according to a report of the organization Oceana Peru.

The Ombudsman’s Office points out that the catastrophe affected more than 10,000 families, because around 2,500 fishermen were affected, as well as tour operators and people who carried out commercial activities dependent on the sea, reports RT.

«Everything changed abruptly when that hydrocarbon tide appeared and, little by little, killed the birds and fish that had the coastal marine zone as their habitat, from the beach to the west, for a distance of 5 nautical miles», said Luis Garrido. Chávez, president of the Association of Artisanal Fishermen of Ancón (Apescaa), quoted by the Andina news agency.Delayed response to the spill

Oceana denounces that there was no timely response to this disaster, since only three days later some actions began, initially with personnel without proper training and adequate protection.

Therefore, the crude oil spread more than 100 kilometers north of the La Pampilla refinery. «If we had a good valve and an adequate monitoring system, the spill probably would not have gone beyond Ancón (25 kilometers) and it would have been easier to contain it», said Juan Carlos Riveros, Oceana‘s scientific director.

The affected area was initially reported to be 2.5 square meters. However, it was later detailed that the spill covered up to 11,000 hectares.Current situation

The declaration of environmental emergency for this disaster expired last October, details the Ombudsman’s Office. Until then – says the institution – there was no medium or long-term management plan that would allow the cleanup work to continue in a planned and articulated manner.

In that month, the Agency for Environmental Evaluation and Control (OEFA) indicated that 71 of the 97 sites impacted by the spill continued to be affected by hydrocarbons.

On January 5, Repsol published that the conditions were in place for the reactivation of fishing and the reopening of beaches affected by the spill.

«New sampling of beaches, water, sediment and marine life show that 100% of the points analyzed comply with international standards and national regulations», said the company on its Twitter account.

According to the firm, the sampling work was carried out between October and November by Environmental Resources Management (ERM), «one of the most prestigious international companies in environmental management».

However, the head of the General Directorate of Environmental Health and Food Safety (Digesa) of the Ministry of Health (Minsa), José Ramos, dismissed the claims of the oil company.

«Repsol is not a health authority. The hydrocarbon settles in the sand, and when people enter the sea they step on it, but it also contaminates the air and, therefore, can affect families that are comfortable receiving the sun’s rays. The damage will not be seen immediately», said Ramos.

Twelve months after the disaster, pollution continues to affect fishermen. Only in the district of Ancón almost 70% of the boats are paralyzed.

«It is frustrating to have an immense sea behind you and not being able to enter to catch a fish, because you would be threatening public health […] It is as if part of our life had died», laments one of the fishermen interviewed recently by Oceana.

This situation has also affected the mental health of the fishermen, since the uncertainty due to the lack of work, and therefore the lack of economic income, is compounded by the little interest of the authorities in resolving the problem.

Likewise, of the 48 affected beaches, 25 are for recreational use. However, it is still pending that the Digesa of the Ministry of Health carry out sanitary evaluations that consider international hydrocarbon standards for this type of beach.

Faced with this situation, the Ombudsman asks the State for «an articulated and continuous action, which also incorporates measures in the medium and long term, by the competent entities to address environmental and social impacts», without prejudice to the obligations of the La Pampilla refinery.

«Permanent monitoring and studies are required in the affected areas, which will allow immediate measures to be taken to protect the health of the people and the environment, even more so when we are in the summer season and in the time of abnormal waves», said Lissette Vásquez, Deputy for the Environment, Public Services and Indigenous Peoples of the Ombudsman’s Office.

Another of the pending issues – says the Ombudsman – is fair compensation to more than 10,000 people, fishermen and people engaged in businesses related to maritime activity, who were directly and indirectly affected by the spill.Sanctions against Repsol for the spill

In the midst of these pending challenges after the spill, it was learned that Repsol’s La Pampilla refinery has been released from a million-dollar fine, amid a conflict of interests.

Seven Administrative Sanctioning Procedures (PAS) for alleged violations of environmental regulations related to this ecological disaster were initiated against Repsol. Currently, one is in process and six resulted in fines totaling more than 70 million soles (just over 18.3 million dollars), reports La República, which had access to documents on the case.

Of these six fines, three are being challenged before the OEFA’s Environmental Control Court (TFA) and the other three are within the deadline to file a challenge, which expires on January 31.

This occurs while a conflict of interests was revealed in the case, since the technical secretary of the TFA, Angélica María García Gilio, is the wife of Adolfo Eugenio Huapaya Venegas, an Industrial Hygiene and Safety engineer at the La Pampilla refinery.

Just last Saturday, January 14, the OEFA announced, through a statement, that García was separated from the position, which she had held since March 2021. «This decision has been executed immediately, upon learning that she has a marital relationship with an official of the company Repsol S.A. In this sense, the necessary investigations have been initiated, in accordance with current legal regulations, safeguarding the interests of the State and respecting due process», says the institution.

«When things like this happen so obscurely, one may think that if there is no complicity, at least there is a very weak hand to sanction Repsol’s conduct to date», commented Riveros in this regard.

In addition to the sanctioning procedures, in August of last year, the 27th Specialized Civil Court of Lima admitted the lawsuit against Repsol, for processing the compensation for damages and losses, presented by the National Institute for the Defense of Competition and Protection of Intellectual Property (Indecopi).