The Attorney General and the Procurator insist that the former president led a corruption network, despite the fact that the evidence has not been confirmed and lacks legitimacy
Share 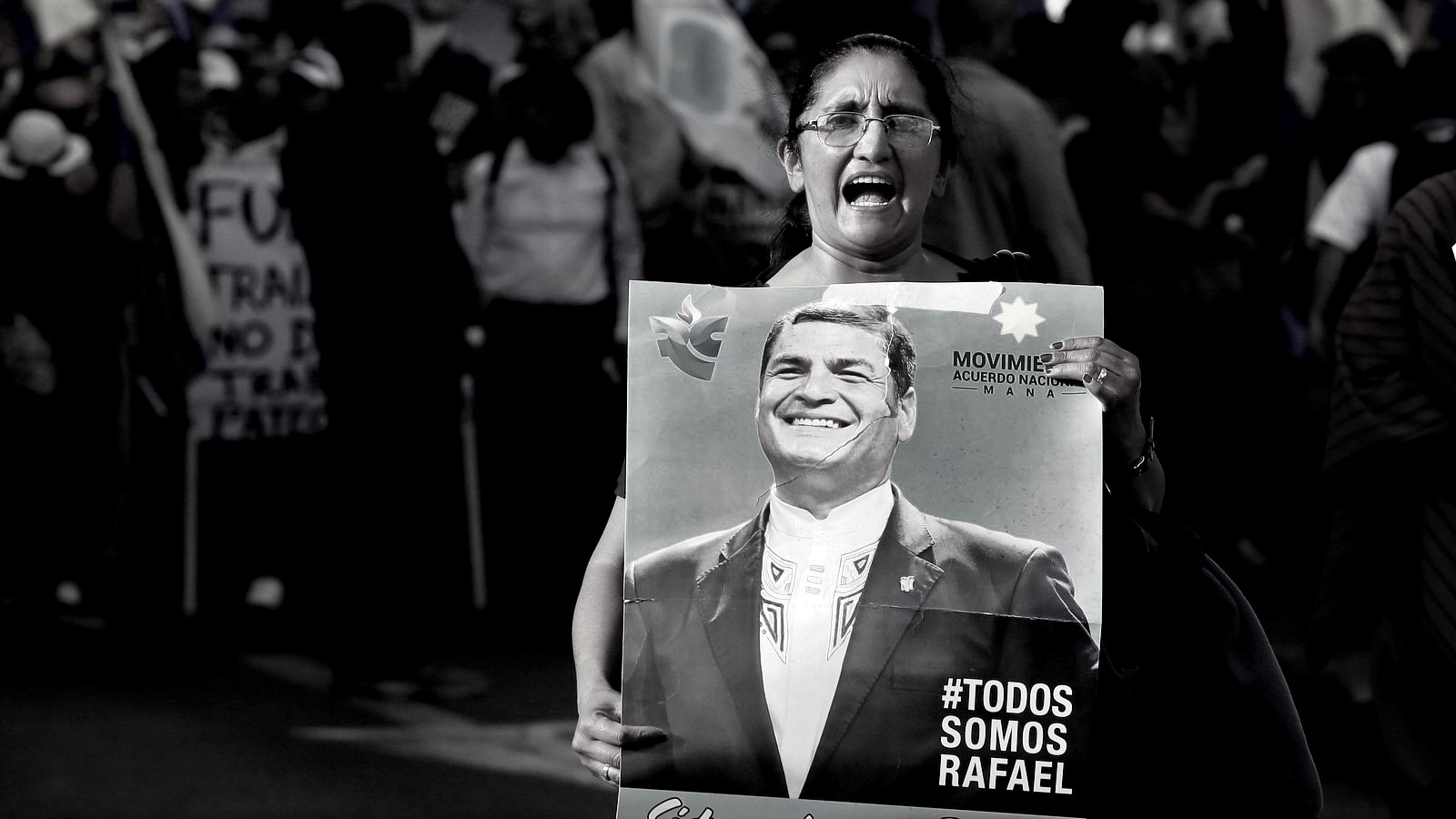 In the style of Jair Bolsonaro and judge Sergio Moro in Brazil, to prevent the candidacy and certain victory of Luiz Inácio Lula da Silva as President, the current Ecuadorian president, Lenín Moreno hopes to do the same against Rafael Correa in the face of the upcoming presidential elections to be held in 2021.

In Brazil, it was discovered that Lula was unfairly taken to prison and deprived of his liberty for a crime he did not commit, fraudulently accused and with unfounded evidence. An action that also robbed him of the possibility of winning the presidential elections, in which -according to all the polls- he would have had achieved a forceful victory.

With this recent and politically close reference, Correa’s former vice president and confidant, Lenín Moreno, plans to create a similar false positive against Correa, so that the former president and leader of the Citizen Revolution – currently dismantled by the Moreno regime – is prevented from running as a candidate for the Presidency that could potentially win in Ecuador.

Precisely on this subject, a scandal has been generated in Ecuador that involves the parties that try to prosecute Correa, and how unfoundedly and for purely political purposes, they intend to accuse him of a crime that he did not commit.

This is how several videos came to light that show controversial statements by the appointed expert of the State Attorney General, identified as Alexandra Mantilla, directly involved in the case and in the process to generate «the evidence» that guarantees them the way to justify the trial against Correa. .

In the videos, the expert, who apparently does not have a law degree and her university degrees are false, but has the protection of the Attorney General, Diana Salazar; hints that the trial is a plot that seeks to get the former president out of the way, who after being betrayed by Moreno – now an ally of ultraconservative sectors of the oligarchy and the business right wing sector as well – has been politically and judicially persecuted in his country.

After the videos of Mantilla were known, the Attorney General herself and the prosecutor Íñigo Salvador came out to defend her and became part of the accusation, stating that Correa led a corruption network while he was President, despite the fact that the evidence has not been confirmed and they lack legitimacy.

While the Attorney General, Diana Salazar, assures that the «Solidarity Fund» of the Presidency -for which they intend to prosecute Correa- is of illicit origin, the expert Alexandra Mantilla in charge of the investigation of the Bribery Case, assures that it is of origin legal.

Mantilla defends in the video that she did not detect any illegal or criminological activity. However, the expert, despite considering the fund legal, did not include this criterion in the profile report to incriminate Correa. In other words, she ignored that «detail» despite being the fundamental element of the accusation.

The justice system, manipulated by Moreno, tries to make believe as «evidence» to prosecute Correa, the existence of a deposit receipt for $ 6,000 in the former president’s bank account.

This would then be the most important “evidence” that the State Attorney General has against the former president in the “Green Rice” Case. With this «proof», the ex-president was accused of being the ringleader of an alleged «criminal structure.»

Former President Correa has always undermined that accusation and explained that the $ 6,000 was the product of a loan requested from the «Solidarity Fund» held by the Presidency of the Republic.

«I had a recurring overdraft, and I borrowed $ 6,000 from the Solidarity Fund that we had in the Presidency (of our same contributions) and I paid it down to the last penny, I (even) have the checks of $ 500 per month,» said Correa.

In this sense, Mantilla commented: «Even this, I have already advanced to the Attorney General, I am going to present (a report) completely separate because the Solidarity Fund, as such, I do not find a legal floor that makes me detect it, nor criminological, that makes me detect it, as an illegal activity. That already corresponds to the Prosecutor, but for me I don’t see it as such ».

In fact, Mantilla admitted that the Fund had a purely humanitarian orientation.

The Ecuadorian press published a report on another alleged loan for $ 20,000 that former President Correa would have made on January 21, 2014, of the so-called Solidarity Fund he was managing.

In this regard, Mantilla noted that the press misrepresented the issue with the alleged new loan of $ 20,000.

«In the matter of the President, I found this the repayment (…) I made the review of all those past records because if he returns it on January 14, it would be evident that it was before the delivery of that money and it does not appear,» says Mantilla. .

In this regard, she adds: «Later I saw that they misrepresented him in the press because they were just saying that it has been discovered that he also made a loan of 20,000, but I, at least, in the records do not find the money out (…) Well, the press does what they can and says what it shouldn’t ».

Another strange element in Mantilla’s investigation is that she claims that she received reports from Intelligence and not from the Prosecutor’s Office, a fact that she publicly acknowledged.

«Well, the files came to me from intelligence», admitted Mantilla in an interview she had with Alexis Mera at her home. Previously, in another interview granted on February 26, 2020 to the digital medium La Posta, Mantilla pointed out that the files were delivered to her duly checked, that is, by the Prosecutor’s Office.

For the expert, everything that is being done against Correa is of a «political nature» and is consistent with Moreno’s intentions to get him out of the way to the Presidency.

«Obviously this has a political tint, that issue cannot cloud my mind on the subject that I have to present my report as closely as possible to the facts. I realize that the matter is very political and my report, at least, will not have political overtones, I will report what I find what you have told me», Mantilla told Mera.

Moreno’s expert is not a lawyer

Another element in the so-called «Trial of the Century»  in the «Green Rice» Case, which also tries to condemn former Vice President Jorge Glas and other former officials and businessmen, is that the main expert of the investigation is apparently not a lawyer.

According to information published in Informa Ecuador, the so-called “expert”, Alexandra Mantilla, not only contradicts herself in what she says privately and publishes in her reports, but apparently she also contradicts herself when she refers to her professional career.

In the interview that Alexis Mera made to Mantilla, the expert assured that she was a lawyer. Mera asked her: «Are you a lawyer? and Mantilla replied: «Yes, too».  But, in another interview conducted on February 26, 2020, the media «La Posta» clearly stated that she is not a lawyer.

«The truth Anderson, I am a law graduate, I am looking for time to defend my thesis,» said Mantilla, who does have a degree in educational administration and a master’s degree in management and leadership, but seems to ‘flaunt’ functions and knowledge that she does not possess.

In fact, in the portal of «Consultation of Registered Titles» of the Secretary of Higher Education, Science, Technology and Innovation (SENESCYT), there are no titles in her name that endorse her expertise in Criminology.

For all this, the reactions to the report of the expert and the questions about her credentials have come to light in the media, because added to her lack of independence and impartiality, it seems that the aforementioned woman usurped functions that did not correspond to her.

Impartial expertise must be done

Meanwhile, the defense team of Correa rejects the arbitrariness of the Moreno regime, considers it necessary to carry out an impartial expertise, but the court that is in charge of the «Bribery Case» refuses to carry it out, especially the one related to the hard drive that contains the so-called green files.

This arises after Correa’s lawyer, Fausto Jarrín, asked that an impartial expertise be made to the hard disk of the files used as evidence in the so-called Bribery Case 2012-2016, and thus demonstrate how the Prosecutor’s Office is using forged evidence in this case.

In fact, Jarrín announced the final conclusion of the expertise carried out by the Colombian company Adalid, which cites: «Within the resulting information, digital files with many characteristics are observed, in this case, the Adalid Corp Forensic Computer Laboratory SAS. states that it is not possible for it to determine if this information was lawfully obtained or its veracity».

«With all this evidence, there is no doubt that the sole objective of the members of this Court is to not allow the former president to appear in the 2021 elections», added Jarrín about Moreno’s claims.

Furthermore, on February 14, 2020, the lawyer Jarrín, who also defends the ex-vice president, Jorge Glas, sent a communication to Dr. Paulo Abrao, executive secretary of the Inter-American Commission on Human Rights -IACHR- to present additional information to the Precautionary Measures of that case.

«Extremely serious and delicate information has come to our attention, which we send to you regarding the process of political persecution instituted by the Ecuadorian State.

Specifically within the case publicly named «Green Rice» and later renamed by the State Attorney General as «Bribes 2012-2016″, cause in which Jorge David Glas Espinel is being implicated».

From the documentation that was sent to the IACHR, it appears that the evidence that the State Prosecutor General’s Office would be using within the judicial process, would have been obtained illegally, violating constitutional and human rights, and even through clandestine investigations, outside of the due process and of the Law. Even such information would have been obtained a long time ago, before the formal prior investigation by the Attorney General’s Office.

«For this reason, we deposit the aforementioned information that is duly expertized in order to guarantee its integrity, which would demonstrate judicial persecution, violation of due process, and forging of evidence so that the IACHR can issue the measures it deems necessary against the Ecuadorian State», points out the letter signed by Fausto Jarrín.

Likewise, Jarrín denounces that the document published by the digital media Thousand Sheets, the original source of the case, is severed, since cells of an Excel page can be seen where apparently codes, the name of the company and of the official who supposedly was related to the company and apparently the alleged amount were specified. «They are pages product of a hack and to upload to the digital portal they mutilated and manipulated», he said.

He recalled that in the first version that Pamela Martínez and Laura Terán rendered, they denounced that their emails were hacked, therefore they demanded guarantees and indicated that their personal and professional integrity is under attack.

After that, the Prosecutor’s Office filed charges for a ‘combination of offences’, (the only figure contemplated in the COIP that allows the accumulation of penalties). They were accused of bribery, influence peddling and illicit association, crimes that together would give many years in prison if found guilty.