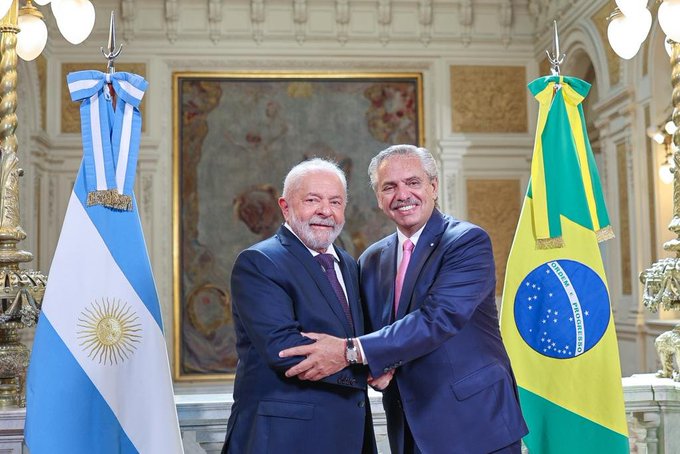 The presidents of Argentina, Alberto Fernández, and Brazil, Luiz Inácio Lula da Silva, met this Monday in Buenos Aires on the eve of the VII Summit of Heads of State of the Community of Latin American and Caribbean States (Celac), with the premise of «consolidating the strategic relationship» between the two countries.

This is the second time that both leaders, with close and affectionate ties to each other, hold a bilateral meeting. The first was only three weeks ago, one day after Lula assumed his mandate. Fernández was the first international leader that the experienced Brazilian politician wanted to receive in his office.

On this occasion, at the Casa Rosada, the presidents addressed numerous issues of relevance to the bilateral relationship and the region in general, and advanced in the generation of agreements so that Argentina and Brazil «grow economically», reports RT.Lula and the common currency

The Brazilian president reported that Brazil and Argentina are studying the creation of a common currency, which would be used in trade between the two countries to reduce the dependence on the dollar.

“We are now trying to work so that our finance ministers, each with their economic team, can make a proposal for foreign trade and transactions between the two countries, which are to be made in a common currency, built with a lot of debate and meetings. That is what is going to happen», said the leader of the Workers’ Party (Partido de los Trabajadores – PT -).

He affirmed that he hopes that the ministers of both governments «can make a proposal for foreign trade and transactions».

«Why not try to create a common currency? I believe that it will happen and that it is necessary for it to happen», said Lula to the press.

Fernández indicated: «We do not know how a common currency would work in our countries or in the region, but we do know about foreign currencies and the harmfulness of all that». For this reason, he celebrated «the vocation of Brazil». And he said: «If we do not help each other change, we will continue to suffer the same problems».

The Argentine economy is suffering a crisis, with a lack of dollars, a fall in reserves in that currency and inflation close to 100% in 2022.Consolidate democracy

The need to strengthen democracy in both countries was also part of the dialogue, after the frustrated attack against Cristina Kirchner, last September, and the attack by Bolsonaristas on three state power buildings in Brasilia, a few days after Lula’s inauguration. .

President Alberto Fernández pointed out that «the first challenge» in the relationship between Argentina and Brazil is «to consolidate democracy and its institutions».

«I want you to know, dear friend, that in Argentina we will always be by your side; I will not allow any delusional, any fascist to seize popular sovereignty», said Fernández, referring to the recent coup attempt in Brazil.Pipeline

In a press conference held after the meeting, the presidents spoke about financing the construction of the second stage of the Néstor Kirchner gas pipeline, which starts in Patagonia and which, interconnected with others, could be used to export gas to Brazil.

«I am sure that Brazilian businessmen have interests in the Argentine gas pipeline (…) And if we have a National Bank for Economic and Social Development (BNDS) for that, we will do everything possible to help its construction», said Lula.

Fernández assured that he is very excited about the possibility that the BNDES of Brazil will finance this work, and he hopes to advance as soon as possible in the construction of this second section to «try to quickly reach the point of union of Uruguayana ( Brazilian city that connects with Uruguay and Argentina) and pass gas to Brazil, if needed.Lula bets on improving the commercial relationship

The president of Brazil highlighted the commercial relationship with Argentina and stressed that it grew from 7,000 to 40,000 million dollars.

That – according to Lula – will improve with his third presidency. «I came back to make good agreements with Argentina. And I apologize for all the rudeness that the former president of Brazil (alluding to Jair Bolsonaro) said about Argentina, who is a genocide due to his lack of responsibility during the pandemic».
Recover Mercosur and re-found Unasur

Alberto Fernández spoke of «the need to integrate Latin America», and said – to the journalists present – that for this, it is necessary to «strengthen, make more efficient and promote Mercosur», the bloc that commercially unites Argentina, Uruguay, Brazil and Paraguay as full members.

In addition, there was talk of «restarting the (Union of South American Nations) Unasur», as well as «taking advantage of tomorrow’s meeting of the Celac, with the purpose of favoring the integration of the region.»Venezuela and Cuba in the Celac

Both heads of State agreed on the importance of the leaders of Cuba, Miguel Díaz-Canel, and Venezuela, Nicolás Maduro, arriving in Buenos Aires to participate in the Celac summit, despite questions from the opposition and the hegemonic media of Argentina.

«The Celac summit brings together countries from Latin America and the Caribbean and, therefore, all member countries are invited. We do not have any veto power nor do we want to have it», clarified Fernández.

And he added: «The truth is that the concern about the presence of the president of Venezuela and Cuba is more a concern of the media than of the members of Celac (…) The concern we should have is the dialogue between Venezuelans, that they recover democratic coexistence and that their rights are respected”.

In the end, President Maduro decided this Monday to cancel his visit to Buenos Aires due to the «extravagant plan» that – according to what he said – was set up against him by the local opposition, which he described as a «neo-fascist right».

Through a statement, the Government of Venezuela confirmed that the trip will not take place. «They intend to put on a deplorable show, in order to disturb the positive effects of such an important regional event, and thus contribute to the discredit campaign —already unsuccessful— that has been launched by the North American Empire against our country», said Caracas.
The electoral future of Argentina

This will be a key year for Argentine politics in general, and especially challenging for the government of Alberto Fernández, since national elections will be held in October. The Brazilian president affirmed that he does not like to comment on the elections of other countries, but allowed himself to make a brief comment.

«The only thing I ask is that Argentina does not allow the extreme right to win in the next presidential elections», said Lula.

For Fernández, both countries have «the same problems» and «similar challenges», since Jair Bolsonaro ruled in Brazil and Mauricio Macri preceded him in Argentina.