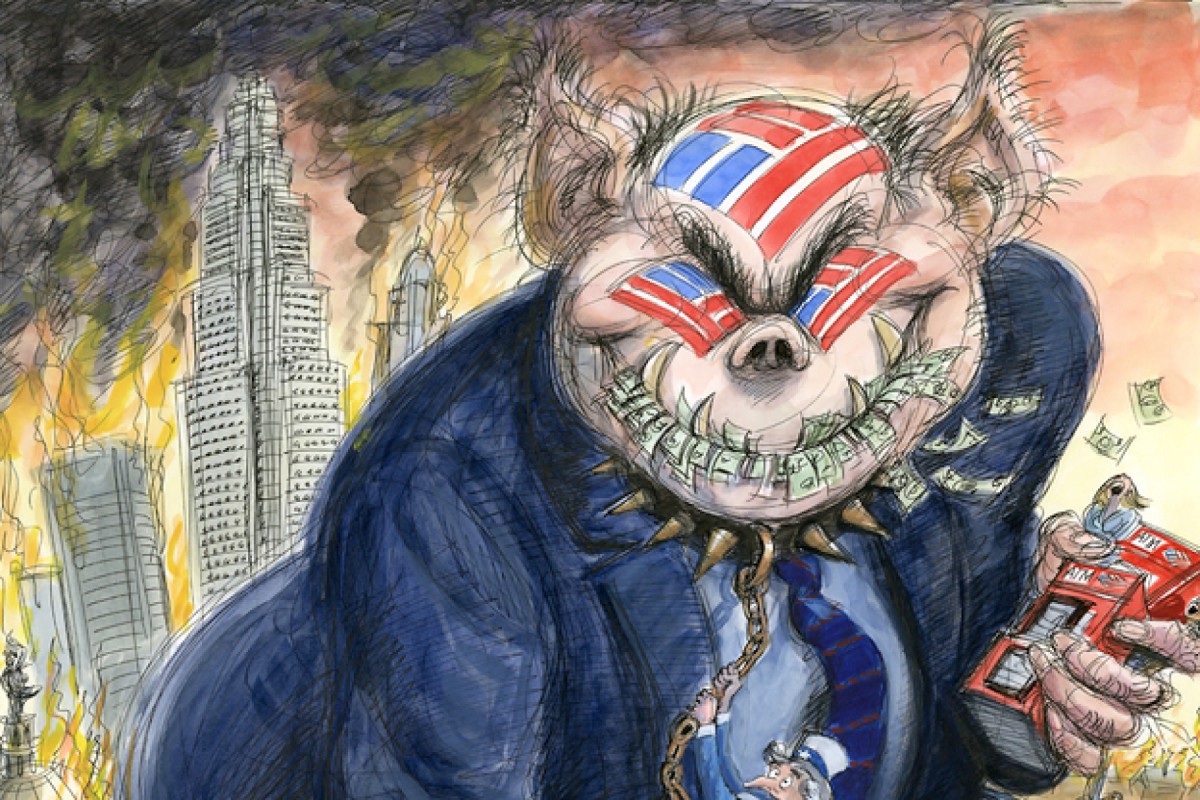 The United States (US) intends to extradite and imprison foreign businessmen whose only crime is having evaded unilateral coercive measures. The most emblematic case is that of the Venezuelan diplomat Álex Saab, but there are other businessmen who are outlined in a report prepared by journalist Stansfield Smith for The Gray Zone.

Just as Álex Saab has been kidnapped in Cape Verde since June 12, 2020; A similar case occurs with the North Korean businessman Mun Chol Myong, he was illegally detained in Malaysia and then extradited to the United States, and in the same way there is Meng Wanzhou, an executive of the Chinese technology company Huawei, who has been held hostage by the Canadian government since 2018 responding to a request from Washington.

In his research, Smith argues that «the US uses economic sanctions as a weapon against States that choose a path of development independent of US global domination» and these include, among other aspects, the blockades of financial and commercial transactions of a country, in addition to working as a destabilizing tool for governments unwilling to bow to the White House’s dictates.

Although the United Nations Organization has clearly established that US sanctions are illegal and represent unilateral coercive measures, the US government has ignored this and, rather, has imposed new sanction packages on countries such as Cuba, Iran, Venezuela or North Korea, despite the fact that its effects have been identified – countless times – as «deadly for the civilian population», emphasizes the journalist.

“US sanctions contributed to 40,000 deaths in Venezuela between 2017 and 2018 alone, as well as the deaths of 4,000 North Koreans in 2018, most of them children and pregnant women. In the 1990’s, sanctions against Iraq resulted in the death of up to 880,000 children under the age of five due to malnutrition and disease”, states the investigation.

The condition that makes it possible for this global action by the US, resides in its control of the international financial system, which allows it to «block money transfers for even the smallest transaction and confiscate billions of dollars held by specific governments and individuals», and it evens «requires that banks in foreign countries accept US restrictions or face sanctions themselves», summarizes The Gray Zone.

The US disregards international regulations

Therefore, although international regulations explicitly prohibit States from imposing sanctions on other States and delegate that prerogative exclusively to the United Nations Security Council, the US government disregards it and even dares to sanction officials of the United Nations. the International Criminal Court (ICC) for investigating war crimes committed by the US Army in Afghanistan.

«We will prohibit your judges and prosecutors from entering the United States. We will sanction your funds in the US financial system and process them in the US criminal system (…). We will do the same with any company or State that helps in an ICC investigation of US citizens», threatened John Bolton, national security adviser to the Trump administration, who quickly went from words to action.

The same thing – says Stansfield Smith – has happened in relation to the extradition attempts of foreign businessmen, who, without having broken international laws, are today in Washington’s sights to be prosecuted under US justice, as Bolton assured his government would do. against members of the ICC.

«Álex Saab, Venezuelan citizen; Mun Chol Myong, a North Korean businessman; and Meng Wanzhou of China’s tech giant Huawei have been accused of violating Washington’s illegal sanctions, though they are all non-US citizens living and doing business outside of the United States. All three are being politically persecuted for acting in the interests of their own countries, and not the United States”, he points out on this issue.

Saab, who has been illegally detained in Cape Verde since June 2020, is accused by the US of «money laundering», but, as Smith points out in his work, «in his case and in that of the other two foreigners who find themselves  in the crosshairs of United States, money laundering does not mean more than carrying out international commercial transactions, which generally must go through the SWIFT financial system controlled by the United States, through which all transactions in dollars pass, so as to avoid unilateral sanctions from Washington». «It is – he adds – the position that Washington uses to enforce its unilateral coercive measures in the rest of the world».

Additionally, the businessman enjoys diplomatic immunity because he was appointed as a special envoy of the Bolivarian Republic of Venezuela to carry out procedures related to the acquisition of food, medicine and other essential supplies, which is why he should not have been detained, much less, be liable to be extradited, as ruled by the court of justice of the Economic Community of West African States (ECOWAS).

However, Saab remains locked in a legal battle with the Cape Verdean authorities, who insist on enforcing an inadmissible extradition order and even unsustainable from the point of view of public opinion, since Switzerland, a country that investigated him for more than two years attending to an accusation of money laundering, closed the investigation on March 25 and admitted that he had not committed any crime.

The Gray Zone highlights that even «the United States Department of the Treasury withdrew on March 31 the sanctions that President Trump had issued to a group of companies allegedly linked to Álex Saab», for which his arrest, classified as kidnapping by the Venezuelan authorities, lacks any justification.

Mun Chol Myong, kidnapped in Malaysia and extradited to the US

With few differences, something similar faced the North Korean businessman Mun Chol Myong, who was extradited from Malaysia to the US, accused of «money laundering» and «conspiracy», as well as supplying «goods to North Korea» – not yet specified. – violating US law.

Much like what Washington later did to Saab, Mun was captured in Malaysia in May 2019 after an arrest warrant was issued in Washington. In the same way that the Venezuelan diplomat does today, the North Korean spent almost two years trying to prevent his illegal transfer to the United States, claiming that his case was politically motivated and that he was being used as a «bargaining chip» among the two governments.

“An indictment by the United States District Court for the District of Columbia alleges that Mun and his unidentified ‘co-conspirators’ used ‘front’ companies and bank accounts registered under false names on behalf of North Korean entities that were excluded from the SWIFT system. According to the FBI, by hiding transactions that benefited North Korea, Mun tricked US financial institutions into processing more than $1.5 million in transactions that they otherwise would not have processed”, explains Smith.

The communicator also highlights that for Washington, North Korean diplomats and foreign businessmen are, if appropriate, «intelligence agents», which opens the dangerous compass so that «foreign citizens who have never been or have worked in the US can be extradited there for violating ‘its laws’.

Moreover, according to the statements of US officials attached to the Department of Justice, Mun’s extradition may be just the first of others that its government has in mind.

«We will continue to use the long reach of our laws to protect the American people from sanction evasion and other threats to national security», said Demers.

Cynically, the US defends its most recent package of unilateral coercive measures against North Korea, based on the alleged development of nuclear weapons by Pyongyang, despite the fact that the US has been the only country that has used these weapons against the civilian population and that, for decades, it has used its warheads to threaten other nations that it defines as enemies, as is the case with Iran.

It was precisely on these points, that Washington hung itself to launch a judicial persecution against Meng Wanzhou, financial director and vice president of the board of directors of the Chinese technology company Huawei, whom it accuses of having deceived the British bank HSBC about the business of the company that it represents in Iran, which would have resulted in the financial institution breaking US sanctions.

In 2018, a New York court issued an arrest warrant against her, which was eventually executed by the Canadian justice system on December 1, 2018. Since then, Meng has been under house arrest, despite the fact that Beijing has described her arrest as «Illegal, without reason and ruthless» and without any legal argument being considered so as to reverse the situation.

According to The Gray Zone, the Trump administration would have mounted the case against the Chinese businesswoman based on two articles published by Reuters in 2012 and 2013 – leaving aside the 2015 Nuclear Agreement, in which all unilateral coercive measures that had been imposed on Tehran had been suspended – using its nuclear program as a pretext.

Therefore, Smith argues, “the unilateral US sanctions on Iran were imposed without any legal basis, and Washington’s justification for extraditing Meng thus violates international law, because the sanctions that the Huawei executive allegedly circumvented are illegal according to the UN Security Council».

In the opinion of political analyst K.J. Noh, Meng Wanzhou’s only fault is being the daughter of the founder of Huawei and by arresting her, Washington intends to put pressure on Huawei and the Chinese government, as well as «stop the technological development» of the Asian nation.

As with Álex Saab and what had already happened with Mun Chol Myong, her defense has repeatedly denounced that the case has an obvious political overtone and, in addition, false evidence has been presented to charge her extraterritorially with crimes that she has not committed either inside or outside the United States.

«There is no connection (…). None of [Meng’s] alleged conduct occurred in whole or in part in the United States. They also had no effect there», said her lawyers.

The novelty of the US: imposing sanctions on people

For Stansfield Smith, what these three cases show is that, contrary to its usual practice, Washington has chosen to impose sanctions on individuals and not on institutions, because «when an executive is carrying out a corporate policy, one would expect that no charges were brought against people, but the corporation would be fined ”, as has happened in the past.

Since 2010, a score of international financial institutions have been fined by the US Treasury for failing to comply with the unilateral coercive measures against Cuba, Iran and Sudan, without this having implied the arrest of their managers or representatives.

Thus, Smith predicts that, if extradited, «it is most likely that Saab, Mun or Meng would receive a highly politicized trial and as ‘fair ’as the one inflicted on the five Cubans or Simon Trinidad».

«These are political cases, disguised as criminal cases. The ‘crime’ is the violation of US sanctions – illegal according to the United Nations – by non-US citizens living outside the US», he adds, so the attempt of the US to prosecute them actually aims to use them as hostages to their governments, whose interests «Washington seeks to crush».

The journalist warns that «these cases open the door for the US to accuse and extradite anyone in the world for unfounded accusations of ‘organized crime, money laundering or terrorist financing’, if it is involved in a perfectly legal international trade that the US government declares that it violates its unilateral sanctions.