Venezuela and the «three true friends» for the political dialogue: Macron, Fernández and Petro

The president of the Venezuelan Parliament had a new encounter with the head of the opposition delegation in Paris, France
Share 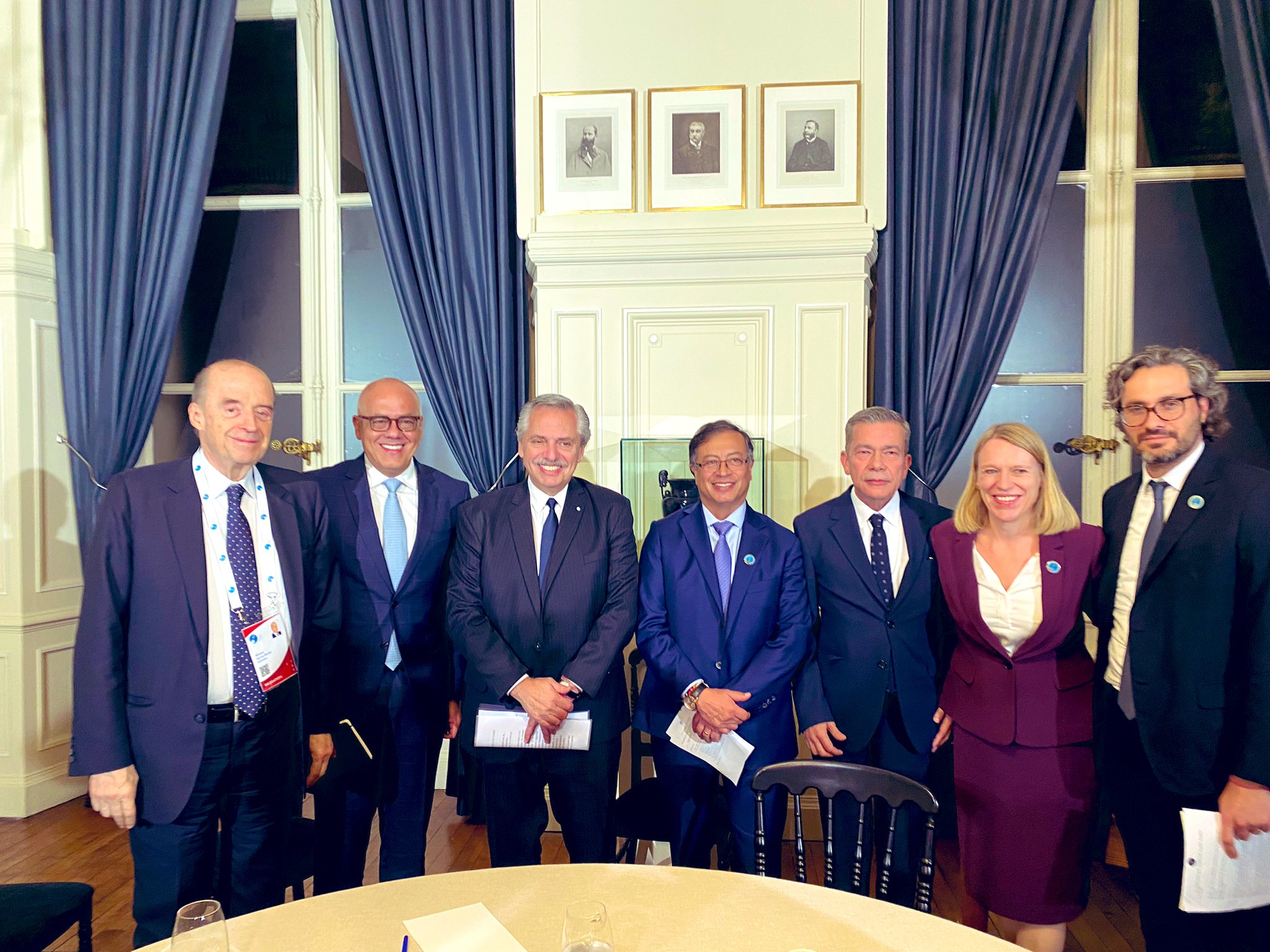 «An effective dialogue needs friends and today we have found three true friends: President Macron, President Fernández and President Petro», stressed the president of the National Assembly of Venezuela, Jorge Rodríguez about the leaders of France, Argentina and Colombia, who participated in a meeting in Paris to advance the political dialogue between the Venezuelan government and the most extreme sector of the opposition in that country.

The Venezuelan spokesman also thanked the Argentine president, Alberto Fernández, and the Colombian president, Gustavo Petro, for joining the accompaniment of the dialogue and articulating with the international community so as to reach an agreement.

Rodríguez pointed out that a fundamental step to resume dialogue is that «the 762 sanctions» against Venezuela, its businessmen, the oil industry, the airline, agricultural products, among others, be lifted, «because no one negotiates with a revolver pointing to one’s head». In addition, he described the meeting as «fruitful and productive».

Rodríguez’s statements came as he left a meeting with the opposition representative, Gerardo Blyde, with the support of Colombia, Argentina, France and Norway, in order to resume negotiations at the Dialogue Table that was taking place in Mexico, that was suspended after the kidnapping of the Venezuelan diplomat Alex Saab, a full member of the government delegation.The Colombian proposal

Colombian President Gustavo Petro proposed several key points to «revitalize» the dialogue table in Mexico between the Government of Venezuela and the opposition of that country, with a view to achieving a political agreement.

The Colombian president indicated that in that meeting he put on the table the ‘unblocking’ of Venezuela, a general amnesty and a coexistence pact for before and after the next elections.

«At the table, where the French, Norwegian, Argentine, Venezuelan government and the Venezuelan opposition intervene to revitalize the Mexican table and the Venezuelan political agreement, I proposed ‘unblocking’ (Venezuela), general amnesty and a coexistence pact for the elections and after them», Petro wrote on the social network Twitter.

The Colombian president showed a photograph on Twitter in which he appears accompanied by the Argentine president, Alberto Fernández; Colombian Foreign Minister Álvaro Leyva Durán; Norway’s foreign minister, Anniken Huitfeldt; the head of the Venezuelan delegation for dialogue, Jorge Rodríguez, and the opposition representative, Gerardo Blyde.

For his part, Romain Nadal, French ambassador to Venezuela, commented that his country wishes to «work tirelessly for the negotiation and peace», and explained that the meeting, held within the framework of the Paris Forum for Peace, was attended by the president of France, Emmanuel Macron.

During a previous meeting between Macron and Fernández, the French president pointed out that the negotiations between the Venezuelan parties «must be resumed as soon as possible in Mexico». In addition, he believes that the process should begin with «a humanitarian agreement and with political guarantees», reports El DiarioAr.New rapprochement for Venezuela

Hours before this meeting, the president of the Venezuelan parliament and representative of the Government in these talks, Jorge Rodríguez, pointed out that «Venezuela’s path is dialogue, the suspension of all illegal sanctions and respect for the Constitution».

For her part, the French deputy Eleonore Caroit, present at the scene together with Rodríguez and Blyde, commented that she had met with both and stressed that «France can play a key role in the negotiation process».

The talks between the most radical opposition sector in Venezuela and the Executive were suspended more than a year ago, in October 2021, after the Venezuelan businessman and diplomat Alex Saab was extradited to the US from Cape Verde.

Despite the ‘freeze’, last May the parties resumed the «formal talks», with the aim of specifying the reactivation of the dialogue in Mexico City, after the US relaxed some coercive measures against Venezuela.

Earlier this week, Presidents Macron and Maduro had a brief conversation in the corridors of the 2022 United Nations Climate Change Conference, COP27, in Egypt.

Maduro publicly invited the French president to travel to Caracas and asserted that he had «absolute confidence» in his envoy, Jorge Rodríguez, to begin to resume rapprochement between France and Venezuela.

The professor, researcher and former Venezuelan ambassador to Cyprus, Ángel Rafael Tortolero Leal, described as positive the efforts of the Maduro Executive to establish a dialogue with the opposition. “Reality prevails and now it is time to sit down, it’s time to dialogue and reach peace agreements and recognition of both the power of the State and the Government of Nicolás Maduro as well as that same opposition that has never been denied its right to participate democratically within the framework of the law», he said.