What did Petro say in his first speech as President of Colombia at the UN General Assembly? 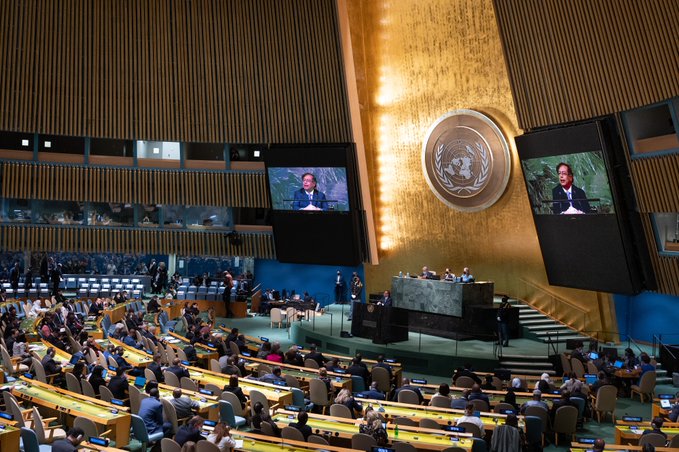 The president of Colombia, Gustavo Petro, called this Tuesday, during his first speech before the UN General Assembly, «to end the irrational war on drugs» that has «poisoned» and «damaged» the Amazon jungle in his country, a lung needed to save humanity.

In his speech at the 77th Regular Session of the General Assembly of the United Nations (UN), in New York, the Colombian president pointed out that the so-called fight against drugs, imposed by the US 40 years ago, has failed and has become a war against the forest, its plants and the people who grow them. “The war on drugs has failed. The fight against the climate crisis has failed», said Petro.

“I propose to you, as president of one of the most beautiful countries on our earth and one of the most bloody and violent, to end the war on drugs and all wars, and allow our people to live in peace”, said Petro, who warned that if the anti-drug policy continues for another 40 years, the US, for example, will see its young people die of overdoses and violence will intensify throughout the continent with millions of victims.

In this sense, he indicated that it is time for the world to change its vision and, instead of «burning the jungle» and filling it with «poisons» -such as glyphosate- to try to eradicate plants such as coca, it should focus on fighting against the power factors that enrich themselves by people’s addictions, drug production and promote the consumption of energy that harms the planet, such as oil and coal.

The Colombian president also called on all Latin American countries to unite to «save the Amazon rainforest», currently threatened by the interests of global power, and to join efforts to maintain life in this vegetable lung through the ‘injection’ of resources that generate funds to finance the «revitalization of the forest».

“If they do not have the capacity to finance the fund for the revitalization of the jungle, if it weighs more to allocate money to weapons than to life, then reduce the external debt to free up our own budget space and with it, carry out the task of saving to humanity and life on the planet, we can do it if you, from the North, don’t want to. Only exchange debt for life, only exchange debt for nature», said Petro.Petro: «It’s time for peace»

In this sense, the Colombian president made a call, “from Latin America”, to summon Ukraine and Russia to make peace: “Only in peace can we save life in this, our common land. There is no total peace without social, economic and environmental justice, we are also at war with the planet, without peace with the planet there will be no peace with the nations, without justice there is no social peace».

Petro pointed out that since coal and oil were imposed as energy engines, a «hurricane» was unleashed that «is the chemical change of the atmosphere, deeper and more deadly», which is nothing more than the war against the earth and life.

«The climatic disaster fills us with viruses that swarm and destroy us, but you do business with medicines and turn vaccines into merchandise, you propose that the market will save us from what the market itself has created, the Frankenstein of humanity is in letting the market and unplanned greed act, yielding the brain and reason, bringing human rationality to its knees in the face of greed», concluded Petro.