During the inauguration of Gustavo Petro as president, the monarch of Spain was booed by those present
Share 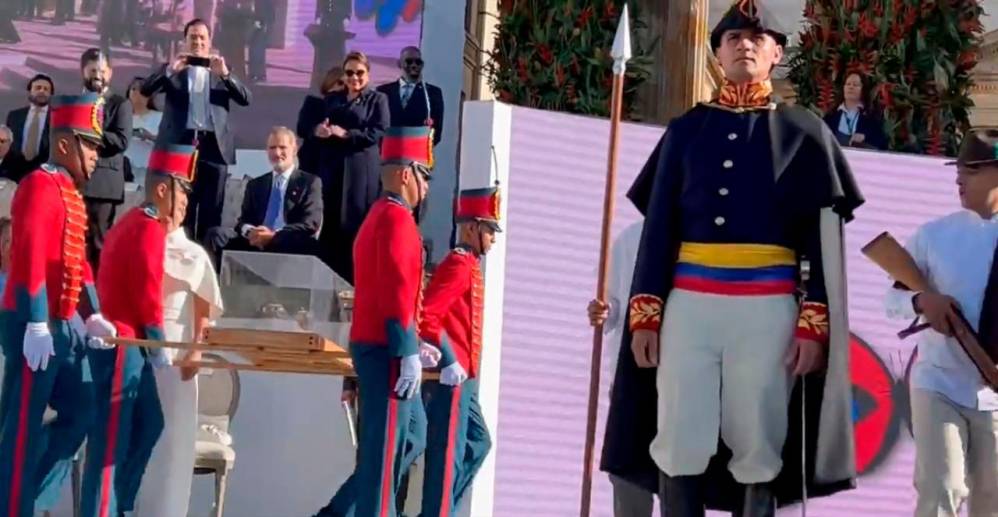 King Felipe VI of Spain has been at the center of the controversy for starring in what has been considered a disrespectful gesture during the ceremonial acts of the inauguration of the new president of Colombia, Gustavo Petro.

Last Sunday, in the massive act carried out in Bogotá, the monarch did not get up from his chair when the members of the Military House (Casa Militar) and custodians of the sword of Simón Bolívar, symbol of the independence of Colombia and other Latin American countries, passed in front of him to place it in a space on the stage where Petro offered his first speech as president.

For Luis Gonzalo Segura, a former lieutenant in the Spanish Army, expelled for denouncing corruption, abuses and anachronistic privileges, “the governments of Spain and Colombia remain silent as much as possible, under penalty of opening a diplomatic conflict that neither wants. The media, except minor media or marginal approaches, too, under penalty of disturbing their masters».

In an opinion article published in RT, Segura says that the controversy on social networks, left and right, is still on fire because of Felipe VI’s gesture of not standing up to Bolívar’s sword, while the rest of the leaders applauded standing.Spain, a fractured country

Juan Carlos Monedero, close to Podemos; Jordi Salvador, from the Republican Left of Catalonia; Josep Rull, from Junts; Jon Inarritu, from EH Bildu; o Néstor Rego, from the BNG, protested angrily on the networks against what they considered an intolerable lack of respect. The left wing and the pro-independence sectors of Catalonia, Euskadi or Galicia defined their position immediately: “regrettable”, “unpresentable”, “a monarchy that supports coups, corrupt and pro-fascist”, “pathetic”, “what is a king for?”.

The response was immediate and the Spanish right and extreme right wing sectors reacted forcefully. From the Popular Party to Ciudadanos or Vox they stressed that Felipe VI complied with the protocol and that, in any case, Bolívar’s sword is stained with Spanish blood. And, as is customary, in matters of State, the Spanish right and extreme right were accompanied by the PSOE, even when the government kept a low profile. Thus, Javier Lambán, president of Aragón, asserted that Felipe VI «was up to the task and did the right thing».

Beyond many other considerations, the rapid and unequivocal alignment of the different political actors reveals that Spain is a fractured country and, perhaps, without a solution to that situation. A country in which any core issue leaves the same contenders on either side: right, extreme right and PSOE, on one side; left and independentistas, to the other. Spain and ‘Anti-Spain’ for some, and Francoist Spain and the sons of Republican Spain for others.Felipe VI of Spain: extreme right-wing, supremacist and colonialist

Leaving aside the Spanish fracture, without a doubt the actor who remains most in evidence is Felipe VI. Back in the eye of the hurricane. For Republican Spain, a king who does not represent them and who, with each passing day, shows himself to be more far-right; for the Spain of Francoist roots, a defender of the fallen Spaniards in America. But who is right?

If we take history into account, the data offers us a very valuable insight in this regard. In the first place, regarding the process of independence of New Granada, a territory currently occupied by Colombia, Venezuela, Ecuador and Panama –in addition to territories of Brazil or Peru–, this left some 400,000 victims, of them some 100,000 in Colombia. Included in this balance are the victims of what became known as the ‘Reconquest’ or ‘Reconquest of New Granada’, a Spanish punishment operation that was known as the ‘Regime of Terror’. The name makes the purpose quite clear.

With these data, contrasts the bellicosity of Felipe VI with the sword of Bolívar and, in general with the Latin American peoples, when he shows great complacency with France. A country that, in the same period, invaded Spain and caused at least a quarter of a million deaths. This in a country with about ten and a half million inhabitants. To get an idea, it would be as if 1.2 million Spaniards perished today. Perhaps this is due to the fact that, to a large extent, such a tragedy had a lot to do with the negligence, stupidity, narrowness and radicalism of his predecessor, Fernando VII.

But, above all, Felipe VI’s animosity towards Simón Bolívar’s sword, which many describe as «genocidal», contrasts with his sympathy for Francisco Franco. Felipe VI was invested as an officer of the Army at the General Military Academy of Zaragoza before the equestrian statue of Francisco Franco without showing any sign of a problem with that, and this happened with the dictator deceased, since he was in the military academy between 1985 and 1986.

Not only that, but for years he was the one who gave their military commissions to the newly appointed Spanish officials next to the equestrian statue of the genocidal dictator – he attended the parade every two years to alternate as prince with the then king, Juan Carlos. Let us remember that Francisco Franco ended with the democracy in Spain, imposed an authoritarian regime for forty years, kept hundreds of thousands of people in concentration camps and caused at least half a million deaths.

In addition, during that fascist uprising, of the half million dead, some 200,000 died, victims of savage violence, exercised above all by the fascists. Among the bloodiest units, the Legion stood out, because it caused such bloody episodes as the Badajoz Massacre, where several thousand civilians were killed, including babies. Many of the victims had been ill-treated, tortured, raped or mutilated. A savage behavior that was not an unusual episode in the history of the Legion, but a hallmark: in the Rif or in Asturias, where the Legion also acted, the murders of thousands of people accompanied by extreme violence have also been confirmed. However, such a record was not ‘inconvenient’ for Felipe VI to become Honorary President of the Legion’s centenary events, which took place in 1921.

If we add to this the behavior of Felipe VI himself – for example, his clash with López Obrador as a result of the request that Spain should ask for forgiveness because of the Conquest – and the other ‘clash’ of his father, Juan Carlos – with that “Why don’t you shut up?” , to Hugo Chávez – not only is it confirmed that the Spanish monarchy has a clear sympathy for the extreme right and a marked rejection of progressive ideas and leaders, but it also exhibits a supremacist and colonialist behavior. But this is diluted before the United States, which snatched, and not in a good way, several of the Spanish colonies, including Cuba, whose loss plunged Spain into a historic crisis.The conflict in Colombia

Surprising as it may seem, the conflict has had a very different path in Colombia. Bolívar’s sword was stolen in 1974 by the M-19 from the Quinta de Bolívar (the House of Bolívar) and it was not returned until 1991 – it remained in Cuba–, as a symbol of reconciliation. The current Colombian president, Gustavo Petro, was a member of the M-19.

Therefore, the symbolism of Bolívar’s sword for Petro and the Colombian left could not be greater. And here is the conflict in Colombia, since Iván Duque did not agree to Bolívar’s sword being part of the ceremony.

But his refusal had an expiration date: the investiture of Petro. Once he was invested as the new president, his first order was that the sword of Bolívar be brought to him. And the criticism in Colombia is centered on this conflict, that demonstrates the fracture of Colombian society, visible in the tensions between the outgoing president and the incoming one.

Aligned to the right

Therefore, this new episode shows, in addition to the deep fracture that exists in Spain or Colombia, that the King of Spain, Felipe VI, like any other representative of the West, is aligned with the Latin American right, with which relations are fluid, while maintaining a bitter position with the Latin American left, which is sustained only by the economic and strategic interests of the different actors.