Why are the protests by hospital workers increasing in Argentina? 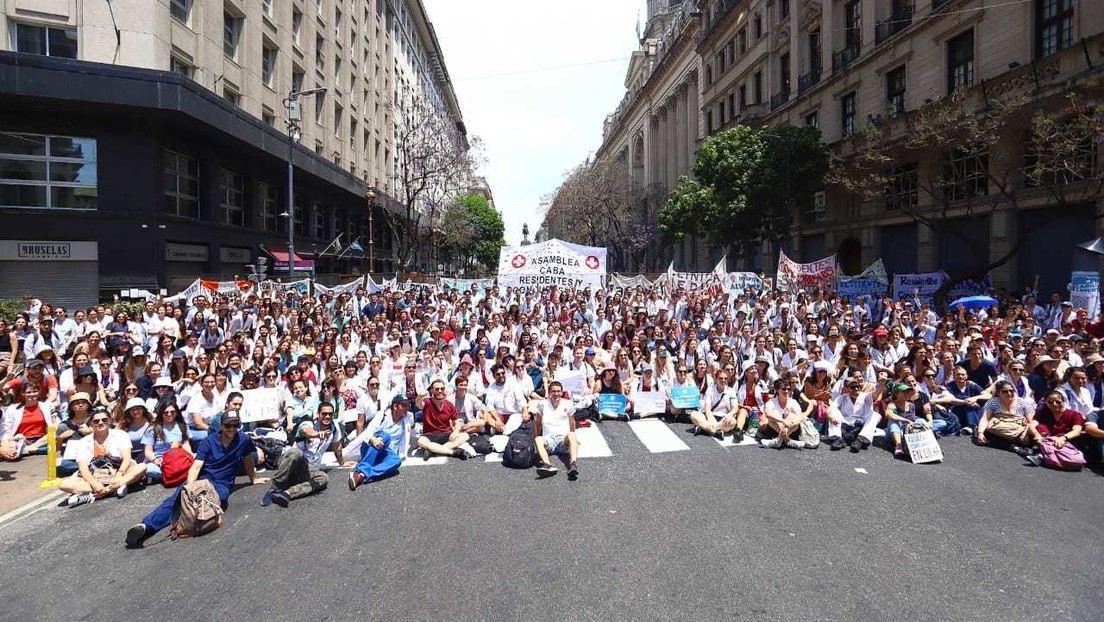 The rescue of the public health system and decent salaries for resident doctors are some of the main demands of the historic mobilizations that are being carried out by the doctors of public hospitals in Argentina.

In the city of Buenos Aires, residents have been on strike for almost a month, with increasingly massive marches and mobilizations in the capital, but the movement is expanding and a National Health Strike with a Day of Struggle has already been announced for next Thursday.

«Health is in intensive care», health workers repeat, over and over again, during the protests in which they denounce the precariousness of a system that, despite everything, resisted the pressure represented by the coronavirus pandemic, reports RT.

“The refrigerator does not fill itself with applauses”, is another of the phrases most used by health workers, who allude to the symbolic recognition they received at the beginning of the health emergency but that, more than two years later, did not prevent the precariousness of their income.

The capital (Buenos Aires) has so far been the epicenter of the protests. The protagonists are the 4,500 residents, that is, graduate and registered doctors who apply to work in public hospitals, but who, today, start earning just 121,000 pesos (746 dollars). It is similar to the value of the basic basket that a family needs in order not to be considered as part of the population living in poverty.

The claim is a 100% salary increase, but the City Government, headed by Horacio Rodríguez Larreta, one of the right-wing candidates for the presidency, only offers a 20% increase.

The hiring of residents and of concurrent (doctors who work ad honorem because it is part of their training) is essential for the public system, since they represent between 40% and 50% of the hospital staff.

Their absence in 20 days of unemployment is already noticeable. Care slowed down, hospitalizations and discharges were reduced, surgeries were suspended and medical care shifts were ‘packed to the full’ at a time that was already complicated by the havoc left by the pandemic in terms of mental health: psychiatrists and psychologists are saturated.All for the the health of Argentina

For this reason, another of the demands is the hiring of more specialists in all areas, as part of the urgent reconstruction that the health system needs and that, during the pandemic in Argentina, left hospital workers exhausted.

Activism in Argentina has been reflected in the recurring mass marches that lead to the Legislature or the Ministry of Health of the capital, located in the heart of the city; in the collective «sittings» on the asphalt of the streets that the doctors have carried out dressed in their traditional white coats and in night walks with torches and candles, such as the one they carried out on Monday night with the motto: «Don’t turn the light out on Health».

That same day, 60 kilometers away, hundreds of resident doctors from the province of Buenos Aires also mobilized to demand decent wages.

The march confirmed that the protests are not part of the political polarization that predominates between the right that governs the capital and the Peronism that governs the province, since, in both cases, the demand is the same: better working conditions for the workers of the health system and the rescue and strengthening of the free public and quality health system.

Now it is a broader struggle, given that the National Federation of Health Workers announced a National Health Strike with a Day of Struggle for Thursday, demanding a renegotiation of wages in the health sector throughout the country.

Another requirement is a budget increase for public health and that doctors do not pay income tax.

“The day of protest is of a federal nature and during its development there will be multiple strikes and mobilizations in almost the entire country”, the workers union said in a statement in which they anticipated that there are already scheduled events in the capital, the province of Buenos Aires, the cities of Córdoba and Santa Fe, and in Patagonia and Northwest Argentina, with central actions in Jujuy.

«The day of struggle takes place in a very special context, in which after the pandemic, health workers are fighting at the national level, in the provinces and municipalities», indicated the workers statement.