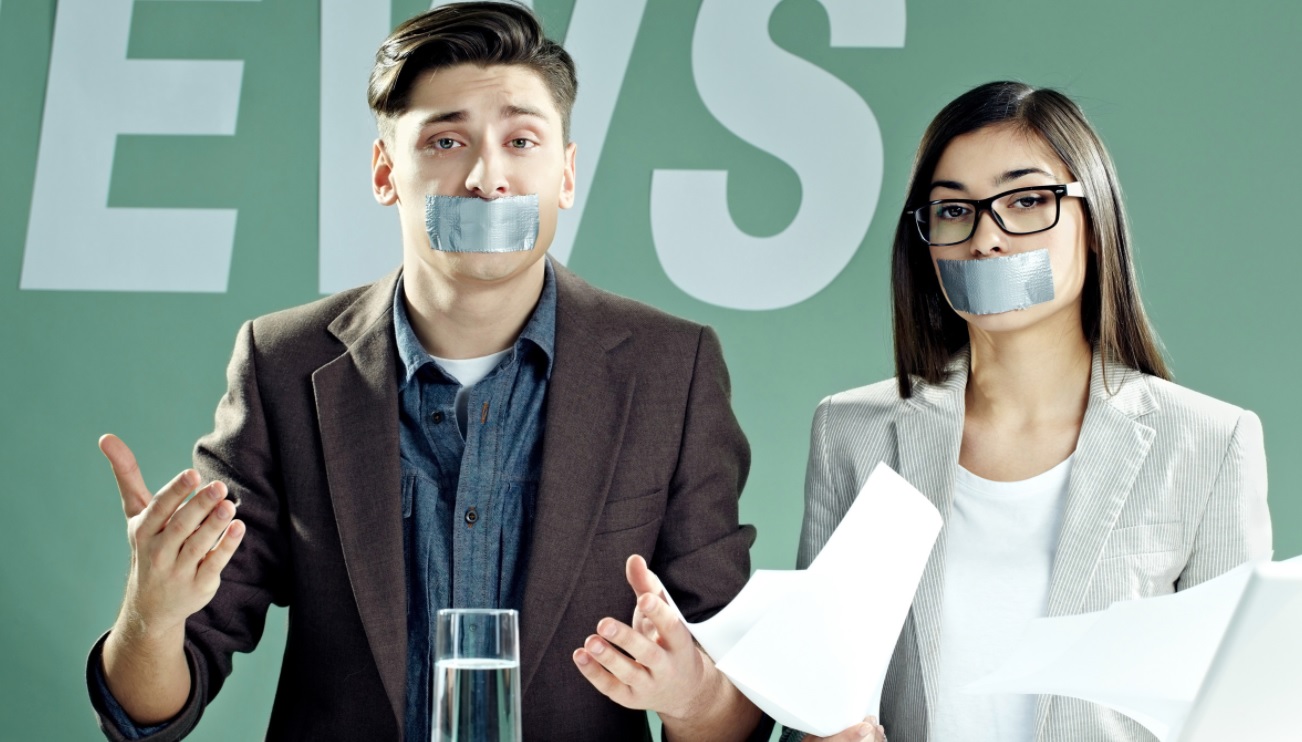 Redacción El Ciudadano.- President of Ukraine Volodymyr Zelensky violates freedom of expression with the support of Nazi groups and through a Presidential Decree closing channels 112 Ukraine, ZiK and NewsOne. The resolution has been challenged and must be evaluated by the Supreme Court of the Slavic country.

Following the decision of the President of Ukraine, Volodymyr Zelensky and the signing of Decree No. 43/2021 making use of the Decision of the Security and National Defense Council of Ukraine dated February 2, 2021, and applying sanctions based on assumptions against one of the leaders of the Opposition Platform, the parliamentarian of the For Life party, Taras Kozak, the authorities proceeded to the closure of the Ukrainian television channels 112 Ukraine, ZiK and NewsOne. An impeachment against the president of Ukraine is underway after seriously violating the right to freedom of expression in the country.

The channels were violently taken off the air, a few hours after the resolution and the programs of the television stations were only available on YouTube.

The measure, without a resolution of a court of justice to support it, violates the right to freedom of expression and has been condemned nationally and internationally by journalism institutions.

Article 19 of the Universal Declaration of Human Rights states “Everyone has the right to freedom of opinion and expression, this right includes the freedom to maintain opinions without interference and to seek, receive and impart information and ideas through any means of communication and regardless of borders; either orally, in writing or in print, in the form of art, or by any other means of your choice”.

Article 19 of the Universal Declaration of Human Rights

In Ukraine, Zelensky and his ‘gang’ take dictatorial measures, in the midst of his low approval rate and against the media that do not celebrate his mismanagement.

The National Union of Journalists of Ukraine criticized the authorities’ decision to impose sanctions. The president of the NSJU, Serhiy Tomilenko, described as “extraordinary” the situation, banning the transmission of some television channels and the “decision” itself as “an attack on freedom of expression”.

The National Union of Journalists of Ukraine denounced in a statement that depriving Ukrainian citizens of access to the media without a prior trial and prohibiting hundreds of journalists and media outlets from their right to exercise their profession “is an attack on freedom of expression “, underlining that” the political affiliation of Ukrainian media owners registered in Ukraine is not a crime“.

The Independent Media Union of Ukraine urged the government to develop a clear legal framework “for the division of media and propaganda resources”, and warned that this politically motivated decision may pave the way to a dictatorship and undermine democracy.

“This arbitrary and politically motivated ban is unacceptable in a democracy”, said Anthony Bellanger, Secretary General of the International Federation of Journalists (IFJ), who urged the Ukrainian authorities to lift the ban and “respect freedom of information and expression”.

The secretary general of the European Federation of Journalists, Ricardo Gutiérrez, argued along the same lines, and said that “prohibiting broadcasts is one of the most extreme ways to restrict freedom of the press”, and recalled that States have the obligation to guarantee an effective media pluralism. “It seems clear that the presidential ban does not conform at all to international legal standards on Freedom of Expression and the media”, he emphasized.

Enemies of Freedom of Expression and their Nazi allies in Ukraine

Although respect for Freedom of Expression is part of the first amendment of the United States, this country and its embassy in Ukraine have come out to applaud and value the closure of Ukrainian television channels.

The US Embassy declared: “The United States supports the efforts … made yesterday by Ukraine in defense of its sovereignty … We must work together to prevent the use of disinformation as a weapon in the information war”.

For her part, the British Ambassador to Ukraine, Melinda Simmons, welcomed President Volodymyr Zelenskyy’s decision to impose sanctions on television channels. The ambassadors of the G7 countries agreed on the need for such measures.

Meanwhile, the representative of the EU External Diplomatic Service, Peter Stano, noted: ‘Ukraine’s efforts to protect territorial integrity and national security, to protect against manipulation of information, are legal, but this should not happen. at the expense of freedom of the media’.

But the story does not end there. Everything indicates that Western countries act in coordination with ultra-nationalist groups within Ukraine.

Immediately after the Ukrainian authorities announced their decision to ban the broadcast of 112 Ukraine, NewsOne and ZiK, in the voice of Olga Gerasimyuk, president of the National Council of Broadcasting and Television of Ukraine, right-wing nationalist groups that profess Nazism and exalt Fascist symbols, carried out a series of attacks against the offices of the television channels and their workers.

Previously, similar “demonstrations” by radicals were carried out in Ukraine to intimidate the opposition media with the tacit consent of the authorities.

Attacks by fascist thugs are left without due attention from law enforcement agencies, while journalists and political opponents of the government are in no way protected from their threats, physical violence and assassinations.

There is evidence that the closure of the television channels was supported by Andrii Medvedko, a member of the far-right organization C14, accused of the murder of the famous Ukrainian journalist Oleg Buzyna (shot dead in 2015). Medvedko is not only still on the run, but he is also completely at ease and continues to spread violence and ultra-nationalist ideas.

Another is right-wing radical Serhiy Sternenko, who killed a man in the spring of 2018 and was recently released on bail by a Ukrainian court. President Zelenzky joins in these criminal acts with a monstrous measure.

More background on the attack

The closure of the Ukrainian television channels closed on February 2, even contravenes paragraph 3 of the Presidential Decree that says that it comes into effect as of its publication, which only became effective on February 4, silencing the media in advance.

Parallel to the closure of the channels, Zelenzki’s ‘enemy of freedom of expression’ government made efforts to completely paralyze the presence of 112 Ukraine, NewsOne and ZiK on the Internet. The websites of the affected TV channels have already been stripped of the .ua domain.

In turn, the Ministry of Culture and Information Policy of Ukraine sent a request to the YouTube administration to block ZIK, NewsOne and 112 Ukraine.

At the same time, Ukrainian radical nationalist organizations have demanded that several other opposition television channels, which have criticized the government, be silenced

No sovereignty, all political revenge

In Ukraine there is a large part of the population that feels more pro-Russian than pro-European, without forgetting their national identity. But such is the degree of meddling by North American and European aid agencies in Ukraine that ‘brainwashing’ has worked mainly by exploiting right-wing nationalism in the less educated population.

This anti-Russian sentiment, which the former President Proshenko was in charge of exacerbating, has had a policy of continuity with Zelensky.

It is not a mystery to anyone that the closed channels have a more pro-Russian editorial position, but for this reason they cannot be accused of propaganda or inciting violence to the population. On the contrary, they are the informational counterweight, balancing the scales of a series of pro-Western Ukrainian media.

Funding for media by George Soros’ Open Society, through The International Renaissance Foundation (IRF) in Ukraine is in the order of millions of dollars. There are dozens of digital media that promote the westernization of an intervened country.

Zelensky uses as an excuse that the sovereignty and national security of Ukraine would be in danger due to the informational work of the closed media, a manipulative narrative, which only seeks to eliminate its political adversaries from the communication arena.

In this case, it is clearly not a sovereignty issue. What we have is a President who fell below 20% approval, compared to 73% when he was elected. A desperate man who tries to block criticism of his mandate that has applied constant increases in gas prices, the heating of millions of homes, which has refused to bring the Russian Sputnik V vaccine, being endorsed by the Lancet as one of the safest to date, while its opponents, the Platform currently maintains the status of the most popular political force in Ukraine, surpassing the Servant of the People party founded by Zelensky.

The response to the censorship action via presidential decree was immediate. Taras Kozak, has been clear and has pointed out that the Zelenskyy government flagrantly violated the Constitution of Ukraine and Ukrainian legislation, since the Law of Ukraine “on sanctions” cannot be applied, while the accusations against him were fabricated .

At the same time, the politician recalled that the NSDC’s own secretary, Oleksii Danylov, admitted the following at the briefing: “the accusations to justify the imposition of sanctions are all assumptions and may not correspond entirely to reality”.

Faced with this, the congress of the Platform of Opposition – For Life party on February 4 decided to initiate the indictment procedure against President Volodymyr Zelensky. Which is in full progress.

In parallel, the challenge to the constitutionality of the Presidential Decree has been initiated before the Constitutional Court and its validity before the Administrative Court of Cassation as part of the Supreme Court.

Meanwhile, there are hundreds of workers and journalists who have been left in a condition of job uncertainty as a result of the actions of the President of Ukraine and the support of the countries that once defended freedom of expression.