Why the US can have 250 million people infected by COVID-19?

Logic: “particular form or way of thinking, seeing, reasoning or acting that is considered coherent, rational or common sense”
Share 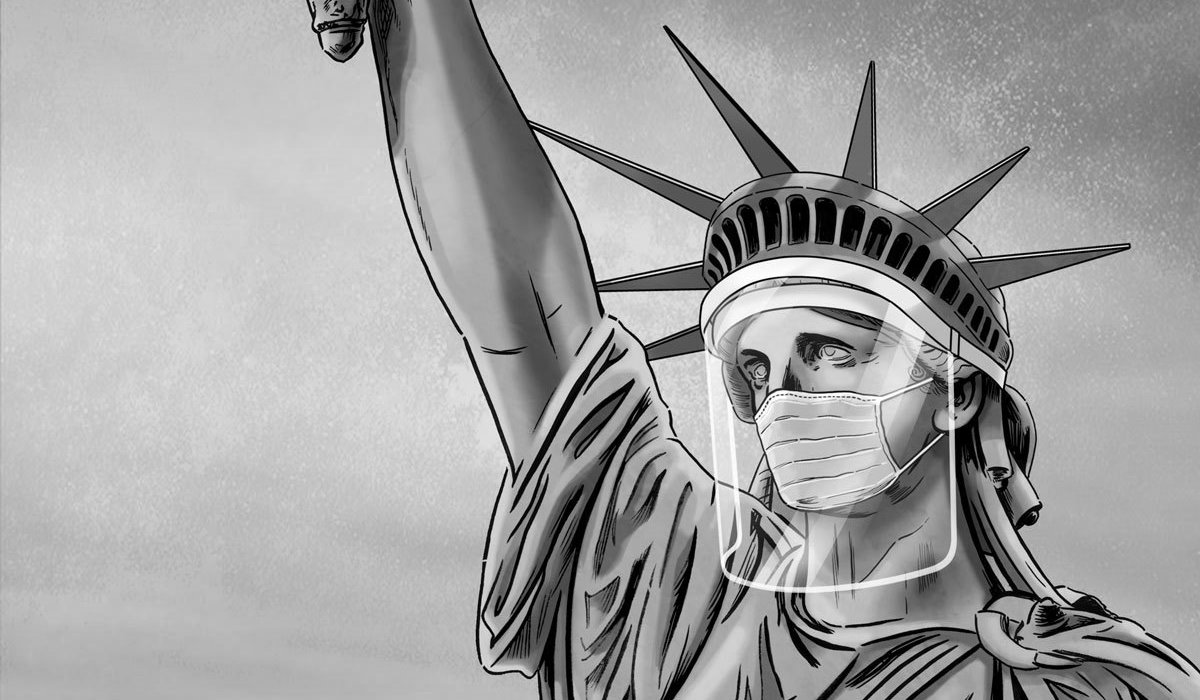 Logic: “particular form or way of thinking, seeing, reasoning or acting that is considered coherent, rational or common sense”. Based on that definition, it can well be affirmed without any doubt, nor discussion and with surgical precision, that the former president of the United States, Donald Trump, was a “reasonably logical” man when he had to speak about COVID-19.

Arguments? It is enough to remember a phrase from a political rally that he offered in June in Tulsa, Oklahoma, regarding COVID-19 detection tests: “The tests are a double-edged sword (…) When you do a lot of tests, you will find many cases . That’s why I told my team: go slower with the tests please”.

Weeks before, he had already presented an ‘argumentative’ aperitif: “If you don’t do tests, you have no case. If we stopped testing right now, we would have very few cases”. It’s there for the world to see. Pure logic.

Now, his words could make people laugh outrageously, instead of provoking nervous laughter, if they had not been pronounced in the midst of the most dangerous global pandemic in 50 years and whose epicenter is the United States, a country that until this February 9 2021, reported more than 27 million positive cases and 467 thousand deaths.

This attitude of Trump during his last year in office is more worrying after listening to Robert Ray R. Redfield, director of the Centers for Disease Control and Prevention (CDC, for its acronym in English), the highest authority on health matters in the North American nation. Months ago, in a telephone press conference, he issued a warning that set off the alarms.

“It is likely that the number of people who have been infected with the coronavirus in the United States is 10 times higher than the millions of confirmed cases”, warned Redfield, who also is the administrator of the Agency for Toxic Substances and Disease Registry, according to US media reports.

The journalists – when they asked him for confirmation of his words – got the following answer: “Our best estimate at this time is that for every case that is reported, there are actually ten other infections”. At that time it was a total of 25 million positive cases. But, taking his words as true, the US today could have exceeded 250 million positive cases. This, although more than 90% have not yet been detected and around half are completely asymptomatic.

But how did the CDC director come to that alarming conclusion? He said that the projection of the number of cases was drawn after examining blood samples across the country for the presence of antibodies to the SARS-CoV-2 virus.

In that sense, he explained that the tests examine a person’s blood for indicators that the immune system activated a response to infection. From there, it was determined that at least 8% of the population did so and, therefore, was exposed to the virus.

However, a risk of these tests is that if they are done in the first week of infection when there is a high probability that the result will come out negative, since the body can take up to 10 days to release the antibodies, according to the World Organization of the Health (WHO).

In the midst of the pandemic, Maria Van Kerkhove, an epidemiologist at the WHO, had explained to the media that “when a person is infected with COVID-19 they develop antibodies and display part of an immune response between one and three weeks after infection”. . However, although the entity has not yet verified that this response of the immune system means that it has immunity, it is clear that this person could infect others.

Given this, virological experts from the CDC defend that the pandemic remains in its early stages and the duty of people is to continue trying to limit the viral spread.

Redfield’s words came just as the case count continues to rise to record heights in many states, during the warm weather months when the pandemic was expected to pause.

Age is not the issue

The director of the CDC reported in late 2020 that although it was believed that people over 65 years faced a greater risk, that marker was eliminated, because although the risk does increase constantly with age, today the youngest are at the forefront of the transmission of the Coronavirus .

“Young people, many of them recently in mobilization after months of confinement, have been tested more frequently in recent weeks and have driven the increase in cases in the south and west” of the country, he said.

Therefore, he urged citizens to weigh their individual risks as they move forward in their lives. “When you have to go out into the community, being in contact with few people is better than many, and shorter periods of contact are better than longer ones”. He also recalled how social distancing, frequent hand washing and good face covering are essential for people’s health .

“This virus causes many asymptomatic infections. The traditional approach of looking for symptomatic diseases and diagnosing them obviously underestimates the total number of infections”, he argued, later recalling that about half of the cases do not have symptoms.

Last June, the director of the National Institute of Allergies and Infectious Diseases, Anthony Fauci, joined the alert call. Fauci warned that the number of daily cases could rise to 100,000, if the authorities fail to contain the spread of the pandemic.

In an appearance before the Senate, he referred to the projections of the CDC and added as a cause of the boom in the incidence of COVID-19 in the US, the “disregard of the population for social distancing”.

The most respected epidemiologist in the country emphasized this last point: “If you look at what is happening (…) mass gatherings of people, often without masks, who ignore the guidelines that we elaborate with great care (…) are a recipe for the disaster”.

For his part, the Secretary of Health and Human Services, Alex Azar, also warned – at that time – that “the window is closing” for the US to take measures to stop the pandemic. However, he recognized that to be successful, it was essential that citizens act responsibly, respect social distancing and take seriously the use of masks.

Health authorities in several states reported – in those pandemic months – the holding of “BYOC parties” (Bring Your Own COVID-19). In them, uninfected people were mixed with positive cases because they believed that if they contracted the virus intentionally they could become immune.

According to official versions, those attending these parties were mainly young, a population that is more reluctant to practice social distancing.

This supremacist attitude can be linked to a theory known as “herd immunity”, which proposes “controlled contagion” to accelerate the generation of antibodies and an immune barrier. However, one of the governments that applied this “strategy” was Sweden and the current result of this practice: almost 600,000 infected and more than 12,000 deaths, ranking 29th among the most affected countries.

Are there also more deaths from COVID-19?

An investigation carried out by the BBC agency concluded that when the world registered 440 thousand deaths – on June 19 – there were actually another 130 thousand that were not counted as a product of COVID-19.

Journalists Becky Dale and Nassos Stylianou reviewed preliminary mortality data from 27 countries and found that the overall death toll during the pandemic – whatever the cause – has been higher than the average for the same period in previous years.

“The so-called ‘excess deaths’ or ‘excess mortality’, which shows the number of deaths above the average, suggests that the human impact of the pandemic exceeds the official data published by the different governments of the world”, said the British media agency.

In the case of the United States, the study concluded that between February 16 and May 2 “the death toll was 16% higher than the average, with a total of 97,300 deaths more than usual”.

So, if by May 2 the death toll was 70,266, it means that in the study period the “excess deaths” was 26,986, and many of them can be attributed to COVID-19, either because they were people who they did not take the test or they did it but they died before obtaining the results.

What newer and current studies say

Joe Biden assumed the presidency on January 20 and immediately he made some sanitary measures and reversed controversial Trump decisions. However, a year after the pandemic spread, the damage was done.

Since March 2020, officials have measured the severity of the spread by tracking one particular measure: how many new cases are confirmed by testing each day. However, it has been clear all along that this number is an understatement due to deficiencies in the tests.

This month, a research team at Columbia University created a mathematical model that offers a much more complete and terrifying picture of the amount of virus circulating in the United States. It also calculates how many people are never counted because they are never tested.

In addition, it answers a second question that is possibly even more crucial, but so far, cannot be estimated in a reliable manner: on any given day, what is the total number of people who are actively infectious? This includes those who may have been infected in previous days but are still spreading the virus and are capable of spreading the disease.

The conclusion of the model: on any given day, the actual number of active cases (people who are recently infected or still infected) is probably 10 times higher than the official number of cases reported that day. The model has yet to be published or peer-reviewed, but lead researcher Jeffrey Shaman, an infectious disease specialist, shared the data exclusively with NPR.

Since the pandemic reached that country, almost a year has passed and the situation continues to worsen every day. If these claims and theories are true, a country with almost 330 million inhabitants – according to the United States Census Bureau – would have more than 250 million infected or around 75% of its population.

How many deaths in the United States will have been caused by the coronavirus? Time will pass and reveal it, with Donald Trump expelled from the White House and back in good health in one of his luxurious mansions. In the end, will Biden be able to stop the spread from continuing, or is it too late?