Brazil: What is revealed by the disappearance of British journalist Dom Phillips and indigenist Bruno Pereira

In the middle of the electoral year in Brazil, this case has once again put on the table the eternal conflicts that plague the Amazon.
Share 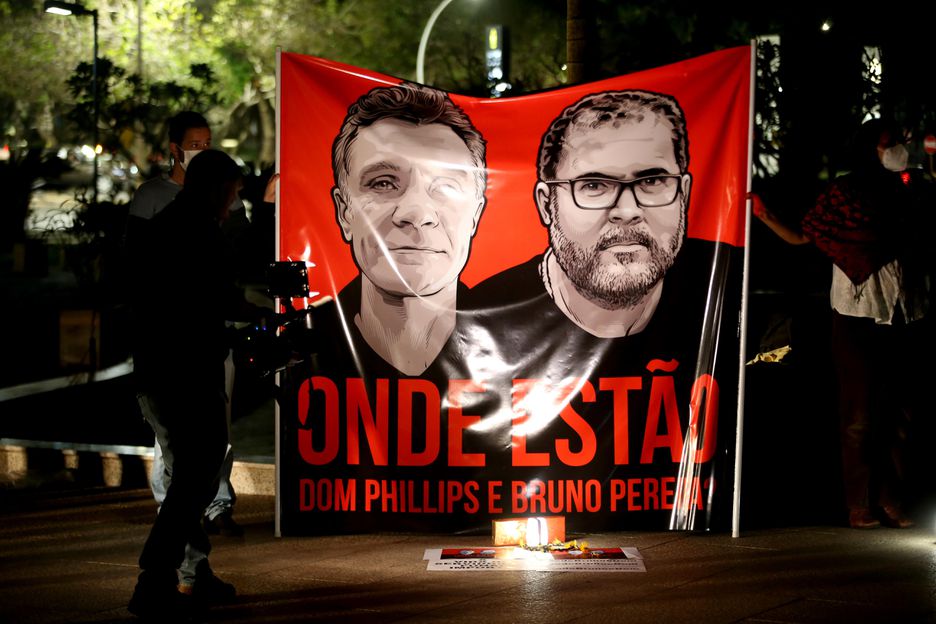 Maxciel Pereira dos Santos was killed in broad daylight with two shots to the back of the head when he was traveling on a motorcycle with his wife in the city of Tabatinga, in the Amazonas state of Brazil, in 2019.

He was 34 years old and collaborated for the National Indian Foundation (Funai) in the defense of the indigenous people in the Javari Valley Indigenous Lands.

He was committed in the fight against mining operations, illegal logging, hunting and fishing. Until today, his crime has not been solved by the Police, explains the journalist Marta Miera for RT.

Dos Santos was considered «the right arm» of renowned indigenist Bruno Pereira, who disappeared on June 5 along with the British reporter Dom Phillips in the same region where his murder was committed.

In September 2019, Dos Santos and Pereira, who at the time was Funai’s coordinator for ‘uncontacted’ indigenous people, helped develop a plan together with the Police to destroy 60 rafts of illegal miners who were exploring in areas near the indigenous reserve. .

Dos Santos died three days before the action was carried out and, a month later, Pereira no longer was a representative of the Funai.

«That exposed them both tremendously», explained Alexandre Saraiva, former Federal Police delegate in the Amazon, during an interview with G1.

Phillips and Pereira, another scandal in Brazil

Three years after the death of Dos Santos, which had little repercussion, the disappearances of Phillips, a regular contributor to the newspaper The Guardian, and Pereira, once again bring to the table the eternal conflicts that plague the Amazon and the lack of protection of the activists.

In the middle of the electoral year, the case has caused a great impact inside and outside the country and has revealed the lack of inspection State agencies in these areas, even more weakened since Jair Bolsonaro came to power.

“It is an adventure that we don’t recommend. Anything can happen», Bolsonaro said, commenting on the expedition in which Phillips and Pereira disappeared.

In an opinion column, the economist Joel Pinheiro da Fonseca assures that by speaking in those terms, the president makes it clear that he has lost any intention of governing the region, that is, that he has lost sovereignty.

«Bolsonaro always flirted with the idea of selling the exploration of the Amazon to large foreign companies, but what he ended up doing was simpler. The government just left the ‘scene’ and let anyone do what they wanted», says the analyst.

The president of the Senate, Rodrigo Pacheco, described the region as a «parallel State directed by the organized crime of transnational drug trafficking that imposes itself where the Brazilian State does not reach».

The Javari Valley is located on the border between Peru and Colombia and is one of the densest jungles on the planet. It has 8.5 million hectares demarcated and represents the second largest indigenous reserve in the country after the Yanomami, which has more than 9.4 million hectares.

More than 6,000 indigenous people of seven known ethnic groups and around 20 ‘uncontacted’ groups live in this region. Its geographical location makes it a perfect refuge for drug traffickers, evangelical missionaries and various criminal activities, such as illegal fishing or hunting.

Since he was exonerated from Funai, Pereira has been working with the Union of Indigenous Peoples of the Javari Valley (Univaja) in a project to monitor the territory and had been threatened on many occasions. Phillips, who has lived in Brazil for 15 years, is writing a book about the environment in the Amazon.

The first hypotheses suggest that the case is related to illegal fishing activities – specifically, a species called pirarucu, one of the largest freshwater fish in the world and protected since the 1980s – and illegal hunting in the region.

«The fishermen never accepted the demarcation of the territory, which was approved in 2001», said Armando Soares, former head of Funai’s decentralized unit in the Javari Valley between 2003 and 2005, and a friend of Pereira, to the Amazonia portal.

The Police investigate a money laundering scheme for drug trafficking through the sale of fish and animals that could be related to the disappearance of the two men.

Bruno denounced in April, to the Public Ministry, that he was receiving threats from a criminal organization that was active in illegal fishing and hunting in the Javari Valley Indigenous Land. In an audio recorded days before his disappearance, he is heard denouncing that fishermen in this area were shooting at the inspection teams.

From the first moment, several teams of indigenous people, many colleagues of Pereira from Univaja, have relentlessly scoured the area, together with the Brazilian Police, Army and Navy.

The help of the indigenous people has been key to finding the objects of the two men last weekend.

At the moment, there are two suspects (who are brothers), detained: Oseney da Costa de Oliveira, known as ‘Dos Santos‘ and Amarildo da Costa de Oliveira, alias ‘Pelado’. Several witnesses assure that they saw ‘Pelado’ follow the boat in which Phillips and Pereira were traveling with his boat before they disappeared.

The results of some blood samples found in ‘Pelado’s’ boat and the analysis of biological material detected in the river are also awaited.

The families experienced distressing moments this week with the crossing of contradictory information about the case. The Embassy of Brazil in the United Kingdom, informed the relatives that the bodies had been found, but the Police and NGOs did not confirm it.

A day later, the Brazilian ambassador to the United Kingdom, Fred Arruda, apologized to the reporter’s family for passing on wrong information.

Bolsonaro, for his part, declared this week that “human viscera floating in the river” had been identified. This Wednesday, the extreme rightist stirred up the situation again with some statements about the British reporter.

«That Englishman was frowned upon in the region, because he did many reports against the miners, an environmental issue, so, in that region over there, which is quite isolated, many people did not like him», he said.

Phillips and Pereira have been missing for 11 days. A tragedy that has served to remind us of the violence and terror suffered by indigenous people in the Amazon, but also by the activists and journalists who fight to help them.