Cuba stops COVID-19 despite the criminal blockade of the US

A specialized technical delegation from the Caribbean island arrived in Venezuela on Sunday night, March 15, to support the coronavirus containment strategy
Share 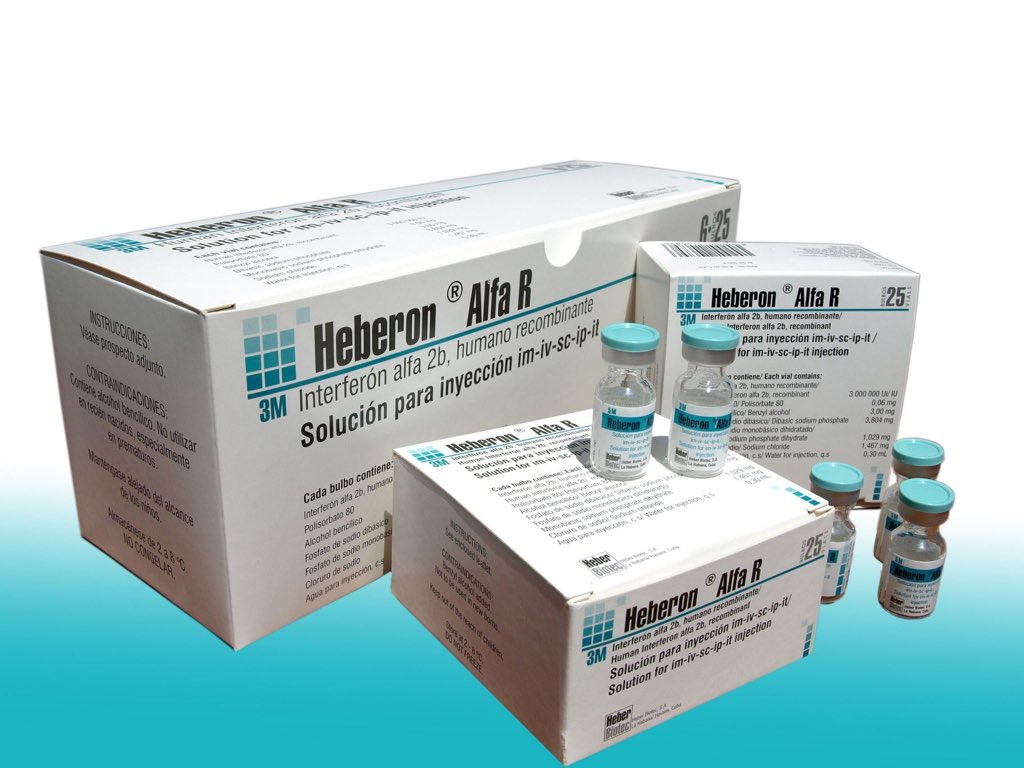 The Revolution in Cuba has ensured that the health and scientific sectors achieve continuous advances in medicine. Several cases are proof of this and to combat serious diseases that have left millions of deaths in the world.

Among the most prominent are -at least- the effective treatments to prevent transmission of HIV-AIDS from mother to child, against lung cancer, diabetic foot and recently, the antiviral to treat the coronavirus COVID-19.

Despite the fact that the small island suffers the most criminal blockade in history, imposed by the authoritarian regime of the United States, advances in Cuban medicine attest to the hard work carried out by the Revolution, not only to overcome the damage done against the population by the blockade, but also to share their contributions for the benefit of the planet.

This is how Cuba has managed to produce Interferon Alpha 2B, a drug developed by the Center for Genetic Engineering and Biotechnology (CIGB), already used by China to treat its coronavirus patients with positive results and which has generated interest of at least 15 countries affected by the pandemic, that plagues more than 150 countries, in purchasing it.

«Interferon is a therapeutic product, it is not a vaccine», confirmed Eduardo Martínez, president of the state industrial group BioCubaFarma, in charge of producing the drug that restores human defenses.

In statements to the Cubadebate portal, Martínez recalled that, according to the Chinese pharmaceutical association -within thirty options- «among the proposals (to combat the coronavirus) the first product of recommended antiviral action is interferon».

Martínez explained that thanks to the agreements and pre-established cooperation between China and Cuba, the drug is also manufactured by the joint venture Changchun Heber Biological Technology, located in Jilin, China, which facilitated its availability for the treatment.

«It is a medicine that we have all the capabilities to supply to the national health system in Cuba and China».

For his part, the director of the (CIGB), Eulogio Pimentel, declared that there are some 15 countries interested in acquiring the product in Latin America, Europe, Africa and Asia.

We have an «Interferon inventory of finished product, for cases that may appear in Cuba over a horizon of three to six months. And, in process, we have the equivalent inventory to treat all the infected that occurred in China», said Pimentel.

«Interferons are molecules that the body itself produces in the face of viral attacks. It is a natural first defense of the immune system to combat the entry of the virus and inhibit it», she explained.

But the coronavirus, instead of inducing the production of interferons, decreases it. «In some ways, administering Interferon from outside could be a correct approach in the midst of the range of treatments being used», she said.

The drug is administered through injectables, but in China it has been applied by nebulization, «because it is a fast route to the lungs and acts at the early stage of infection», added Ayala.

Cuba offers support to the world

Last Friday, March 13, the United Kingdom asked the Cuban authorities for the docking permit in a Cuban port of the cruise ship MS Braemar, of the Fred Olsen line, with a small number of travelers affected by the new coronavirus (SARS CoV 2 / Covid -19), and their repatriation by air.

Given the urgency of the situation and the risk to the life of sick people, Havana allowed the docking of the ship and adopted the sanitary measures and protocols established by the World Health Organization (WHO) and the Cuban Ministry of Public Health to receive the citizens on board the cruise ship.

«In conjunction with the British authorities, it has been organized that once the cruise passengers arrive in the national territory, these travelers will proceed to the safe and immediate return to the United Kingdom on charter flights by airlines to that country», stated  the Cuban Government.

«These are times of solidarity, of understanding health as a human right, of reinforcing international cooperation to face our common challenges, values that are inherent in the humanistic practice of the Revolution and of our people», indicated the Ministry of Foreign Affairs of Cuba, through a statement.

Not only did the United Kingdom ask Cuba for help, so have other countries like Chile, Italy, Spain, several Caribbean countries, and Venezuela, among others.

Last Saturday it was the health authorities of Lombardy, in Italy, who requested the presence of Cuban medical personnel to combat the 2019 coronavirus.

Likewise, Jamaica, Saint Kitts and Nevis, and Saint Vincent and the Grenadines. In this regard, the Prime Minister of Jamaica, Andrew Holness, who has already banned the entry of people from the United Kingdom, indicated on his Twitter account that 21 Cuban nurses will arrive to the Caribbean island in the coming days, although they require about 100 to cope with the new disease, which has already caused more than 5,000 deaths worldwide.

“We are expanding the staff to deal with what we think will come. On March 24, 21 specialized nurses will arrive from Cuba. We are looking to get about 100”, he noted in his tweet.

He added that his government, which has confirmed eight affected by COVID-19, is «doing everything possible to stop the spread of the virus».

Similarly, Terrance Drew, an expert on health issues of the opposition Labor Party (SKNLP) of Saint Kitts and Nevis, declared that they want to ask the Cuban authorities help «to create an infrastructure and a plan to treat people who become infected».

A similar request was made by the authorities of Saint Vincent and the Grenadines.

In Italy, health officials in the northern region of Lombardy reported that they requested medical personnel from several countries to combat the coronavirus.

The Lombardy Health Minister, Giulio Gallera, explained in a press conference this Saturday that foreign health workers will come from «Venezuela, China and Cuba».

«Obviously we will give them a place to live because we need the skills of everyone'», he said.

Italy has a death record of more than 2,500 out of a total of more than 31,000 confirmed cases. Of that total, almost 1,000 deaths have been in Lombardy and more than half of the infected registered at the national level are from that region.

A specialized technical delegation from Cuba arrived in Venezuela on Sunday night, March 15, to support the containment strategy of COVID-19.

«We come with the commission of our country, of our Government, to evaluate the level of preparation and protection of our cooperators and exchange experiences in the elaboration of the National Plan that is implemented today in Cuba», said Dr. José Ernesto Betancourt Lavastida, Director of Defense and Civil Defense of the Ministry of Public Health (Minsap).

Together with the Cuban Medical Brigade, the working group will assess «how the protection of the Venezuelan people, the preparation of institutions and the social communication of the risks of this disease can be better», said Betancourt.

«I am accompanied by five specialists of high technical and professional level in their respective competencies: two intensive medicine specialists, an epidemiologist and a microbiologist-virologist from the Pedro Kourí Institute of Tropical Medicine, where the main actions of epidemiological surveillance, isolation and treatment of our patients, including the four confirmed cases that we have in the country and that are progressing satisfactorily”, explained the Cuban doctor.

Betancourt also pointed out that Luis Herrera, founding director of the Center for Genetic Engineering and Biotechnology in Havana, also came to Caracas, who «comes to assess the relevance and possibilities of use of Cuban medicines in the interest of fighting this disease».

For his part, Rander Peña, Venezuelan vice minister for Latin America, who accompanied the delegation, greeted this first group of Cuban specialists who, in solidarity and ‘like brothers’, will help the people of the South American country.

The Government of Venezuela reported that on Tuesday, to date, 36 people with COVID-19 had been detected in eight states of the country. All imported cases, the vast majority from Europe and a few others came from Colombia.

Since last Friday, March 13, infections in Venezuela have occurred as follows on consecutive days: 2, 8, 7, 16 and 3.

In the last 48 hours, Cuba has not reported new cases of Covid-19. The four detected patients remain hospitalized, evolve satisfactorily and are guaranteed the resources for their recovery; while the control actions focus, necessarily, in preventing the spread of the pandemic in the country continue.
The information, offered this Sunday at a press conference and quoted by Cubadebate, came from Dr. Carmelo Trujillo Machado, head of the Department of International Health Control of the Minsap, who stressed that the implementation of the measures established for the prevention and the combat against the new coronavirus continues. and it works closely with the organisms of the central administration to achieve the containment of the disease.

For his part, the Cuban president, Miguel Díaz-Canel Bermúdez, stressed that the population and the authorities are in need of complying with the indicated measures to face the pandemic and not lower their guard in the face of the danger that the expansion of COVID-19 continues to pose.

In a work meeting, the President summoned the population to be responsible, avoid activities involving crowds, and go to the doctor if they have any respiratory symptoms.

According to what was revealed at the meeting, so far the direct contacts of the four infected on the island are still under active surveillance, without any incident for now.

The situation, Díaz-Canel said, has remained stable because we have taken measures and «it cannot get out of hand. We have to work differently, because the situation in the world is becoming increasingly complex».

The Head of State considered it a priority for family doctors and nurses to come to their homes to treat respiratory infections when thay are in their initial phase, especially during weekends, when there are more people in their homes. He added that health checks in work and study centers should be maximized.

The President warned the population to stay informed through official channels and thus not give space to false and bad faith news. On social networks, he added, “Cuban reality and what we are doing are distorted. The official information, which is being given with all seriousness and responsibility, comes from the Ministry of Public Health».

For his part, the Minister of Health, José Angel Portal Miranda, explained that 259 patients are been admitted for epidemiological surveillance: 90 foreigners and 169 Cubans. Since January 25, they have added 272 admissions and 15,793 people have been followed up in primary care.

He explained that studies of other respiratory viruses have been maintained, most of them positive for Influenza A, which is a normal indicator at this time of year. For COVID-19, 51 patients were studied, with four positives.

The Miranda portal insisted that a check is also kept on the contacts of people confirmed with the new coronavirus, both of the first three Italians, and of the Cuban patient from Villa Clara. Of the latter, he reported that his two direct contacts, including a one-year-old girl, resulted negative in the test.

Regarding the organization of medical care, he updated that 1,442 beds are enabled in 11 hospitals and 867 in 10 isolation centers. In addition, 175 ambulances were assigned to transfer suspected or confirmed patients, with a crew trained in handling these cases.

The Minister pointed out that there is presence of the international medical collaboration in 23 countries that today have transmission cases of the new coronavirus, and so far no problems have been reported with them. The medical brigades are trained in the treatment of COVID-19.