Did he know or did he not know? Was Duque aware of a mercenary plan to kidnap Maduro?

Although the Colombian President took office on August 7, 2018, the record of attempts to assassinate and / or overthrow Maduro began to be carried out three days before he took the presidential chair
Share 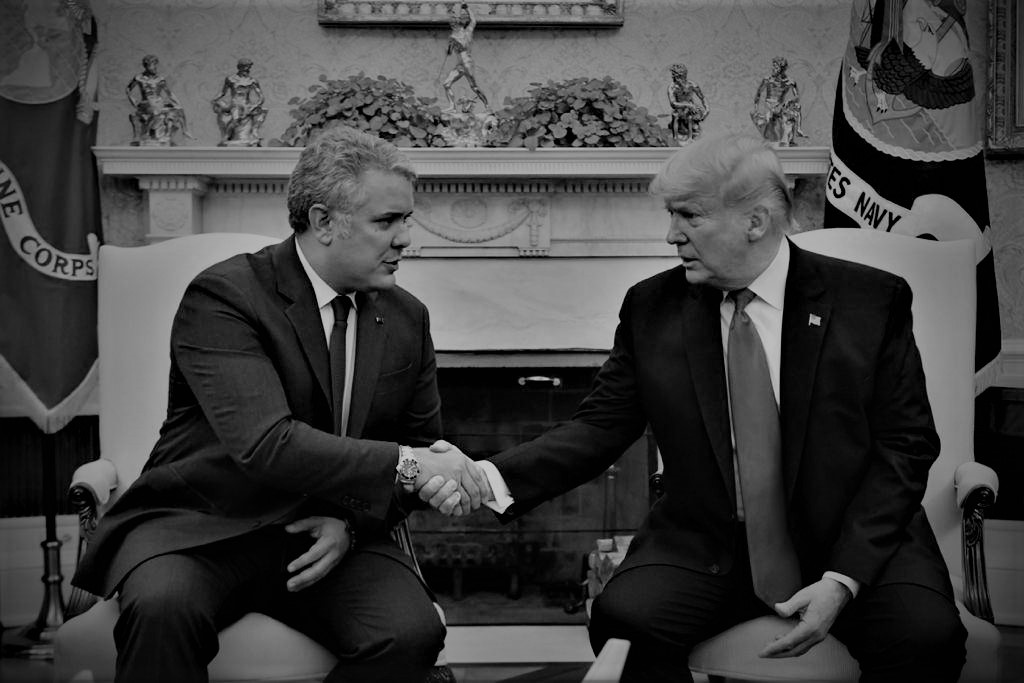 Since last Sunday, May 3, Venezuela has been on alert and its armed forces are active to confront an invasion operation carried out by mercenaries who were protected in Colombian territory for more than a year – under the Iván Duque regime – where they received training, provision of weapons of war and equipment to carry out assassinations and assault.

This group of mercenaries, hired in October 2019 by Juan Guaidó and his trusted team, which receives full support from the Donald Trump regime, has been trying to enter Venezuelan territory from Colombia with the aim of carrying out the assassinations of the heads of the venezuelan governmental authorities, take power and hand it over to the White House.

Despite the tangible evidence about the actions of these irregular groups on Colombian soil and their violent purposes in Venezuela, after five days from the first incursion, the Uribista regime of Iván Duque has not yet expressed any position on the subject, not even so as to disassociate himself from the operation.

It is not the first time that Duque has been involved in this type of action against the Maduro government. Once he won the elections in his country, a process that has countless allegations of fraud due to bribery and vote buying, the head of the ‘Casa de Nariño’ has reiterated that he will do everything possible to help get Maduro out of the power and establish a regime servile to the United States.

The first time that Duque was explicitly supporting the seditious plans in Venezuela was when Guaidó proclaimed himself president of a false parallel government to that of Maduro and sought to carry out an invasion with irregular groups from the border city with Venezuela, Cúcuta, on February 24 of 2019.

Since then, there have been several occasions in which the Duque regime has been publicly linked to the execution of paramilitary plans to try to overthrow Maduro and take political control by storm in Venezuela, something that to date, they have not been able to achieve. They have only managed to accumulate failures after failures.

Although Duque assumed the presidency on August 7, 2018, the record of attempts to assassinate and / or overthrow Maduro began even three days before his seizure of power, when on Bolívar Avenue in Caracas, an attempt was made to carry out a massive assassination involving the use of two drones loaded with explosives that were to explode on a platform where the Venezuelan Head of State, the heads of the different Public Powers and the Military High Command were present.

After almost two years of different procedures against Maduro and his government, even the Venezuelan and foreign extreme right wing joins the seditious plans financed, promoted and directed by Washington. That advanced mercenary action against the Bolivarian Revolution has a new chapter, which is led by Trump and with the stellar participation of Duque.

The confessions of Aaron Berry and Luke Denman, the two US mercenaries hired by SilverCorp, are also supported by the confession made by Juan José Rendón – Guaidó’s advisor – to the CNN channel.

In that interview, Rendón, who appears signing the contract with SilverCorp, along with Guaidó, Sergio Vergara, Manuel Retutera and Jordan Goudreau, admits that they did work on that seditious plan and that the objective was to «capture» government officials who were accused by the United States. This is linked to the recent publication of the Department of Justice of the US, that offers rewards for a large number of representatives of the national venezuelan government, including Maduro, for a sum of 15 million dollars.

So, while everything points to Duque and his government, including the confessions of the mercenaries captured in Venezuela who claim to have lived quietly in Colombian territory, and the testimony of SilverCorp USA INC executive director himself, Jordan Goudreau, who said he has been behind this plan for more then a year, neither the Uribe leadership nor the rest of his government say anything about this.

Is Duque taking refuge in the popular saying ‘silence is consent’?

Duke protected mercenaries as they prepared the invasion

In mid-March, just when Washington began promoting the departure of Guaidó as a false «interim president» to create a «transitional government», a plan is discovered that is part of the same actions generated since 2018 to try to remove Maduro from power .

The Colombian traffic police carried out a significant seizure of weapons of war on a town very near the border with Venezuela. Venezuelan intelligence began to tie up the dots and discovered a plot for seditious purposes that links Guaidó with several fugitives from justice, including military deserters from the Armed Forces and from police forces that participate in a criminal network that plans selective assassinations against different heads of the venezuelan Public Powers, as well as generating terrorist actions.

One of its coordinators is the fugitive Cliver Alcalá Cordones, who works for the DEA and the Trump regime, and who had the responsibility of bringing in this batch of weapons so as to deliver them to mercenaries who were already in Venezuelan territory and thus perpetrate the murders of governmental leaders.

After the plan was discovered, Alcalá Cordones offered an interview to the Colombian media WRadio in which he confirmed that they are responsible for this plan and that Guaidó had signed a contract to execute this paramilitary maneuver, under the coordination of two agents of the United States Government who were described as advisers.

In that same interview, Alcalá also talks about Robert Colina Ibarra, alias «Pantera», a military man and deserter who was an escort to the former Minister of Communication and Information, Andrés Izarra, and who was in charge of one of the three training camps for mercenaries located on the border of Colombia with Venezuela, in the town of Riohacha.

Upon learning of the scandal, Washington sought to get out of trouble with a «Most Wanted» list, in the style of the Wild West, in which they put a price on the head of Maduro -15 million dollars- and that of several of the members of his Executive train, for 10 million dollars each, and to which was added several former officials who now work for them and who are used as sources to justify with false testimonies, the supposed existence of a drug trafficking network, including Alcalá Cordones.

In fact, when Alcalá Cordones gave the interview, he abruptly interrupts it because he says that he is being called by «an American adviser» and that later he would call back later, but he did not and later it was learned that he had «delivered» himself to the DEA.

The plan, now known as «Operation Gideon,» was half completed, and its main strategist, the american Jordan Goudreau -commanded by Trump- maintained the training of about 60 men divided into three camps, with 20 mercenaries in each one, located in the Colombian border area with Venezuela and under the knowledge of Bogotá, which according to statements by Goudreau himself protects them through the activation of the TIAR.

Finally, Goudreau decides to carry out the military incursion and alleges that his men decided to do it because Guaidó had betrayed them by not financing their stay in Colombia, where he was practically starving them and that he used them as a pretext to enrich himself.

Goudreau shows the contract signed by Guaidó, Juan José Rendón, Sergio Vergara and Manuel Retureta, which establishes that they will pay Silvercup USA INC. the amount of 212 million dollars to execute «the liberation of Venezuela». In addition, the contract establishes that the payment guarantees given to the mercenary contractor company is the Venezuelan oil, surely from the same money stolen from CITGO and Monómeros, subsidiaries of Petróleos de Venezuela (PDVSA) abroad, specifically in the United States and Colombia.

José Alberto Socorro Hernández, alias Pepero, one of those captured by the Venezuelan authorities and who is part of Operation Gideon as a DEA agent infiltrated in Venezuela, confessed that the La Guajira cartel, of Colombian origin, was going to pay him two millions of dollars for participating in the seditious plan.

In a video shown by the Venezuelan Minister of Communication, Jorge Rodríguez, ‘Pepero’ confesses his participation and links several fugitive opponents of Venezuelan justice in the plan, as well as the financing of the drug trafficker Elkin Javier López Torres alias ‘Double Wheel’, relative of Marta González, wife of Clíver Alcalá, and who was going to pay him two million dollars.

In this way, ‘Pepero’ links ‘Doble Wheel’ as sponsors of the operation of the paramilitary group led by Harold Lu and Jordan Goudreau in the company of Joel Palmar and under the advice of former prosecutor Luisa Ortega Díaz.

‘Pepero’ is told that the operation will be a success because it is supported by the Colombian State, but ends up captured by Venezuelan forces in Operation Negro Primero carried out in Macuto, La Guaira state.

Alias ‘Pepero’ had the mission of receiving mercenaries in Venezuelan territory and delivering them eight trucks, of which two had AFAG submachine guns on the roof. After landing in La Guaira, the mercenaries were going to attack the General Directorate of Military Counterintelligence (DGCIM), the Bolivarian Intelligence Service (SEBIN) and the Miraflores Palace to kidnap Maduro, take him to the La Carlota airport in Caracas and fly to the United States.

All the confessions of those captured point against the Duque regime and certify that they carried out paramilitary training in Colombia, where they lived in lodged and protected.

Despite all this, neither Duque nor his government have declared on the matter. On Wednesday, May 6, Duque made reference to Venezuela but in a victim tone, asking for more international support because of the supposed weight that the migratory wave of Venezuelans represents for his country.

However, contradictory to what Duque says, what is happening is that thousands of Venezuelans residing in Colombian territory are deciding to return to their country, as they have been completely exposed and vulnerable, without access to financial resources or help from the Colombian Government, because of the crisis generated by COVID-19.

In addition, Venezuelans are victims of xenophobic acts against them. They are forced to sleep in the streets when they are kicked out of the places where they lived rented because they cannot pay their rents, since they cannot go out to work due to mandatory confinement, a situation that is not recognized by Duque.

Since the pandemic and the health crisis began in Colombia, which has led Duque to decree the economic emergency to safeguard the interests of business sectors, it is estimated that more than 28,000 Venezuelans have left Colombia seeking their salvation in Venezuela.