Ecuador: An indefinite strike by the indigenous movement registers clashes with the police: why did they call for this strike?

The president of Ecuador, Guillermo Lasso, said that he is not going to allow the interruption of transit in roads and highways, nor the seizure of oil wells.
Share 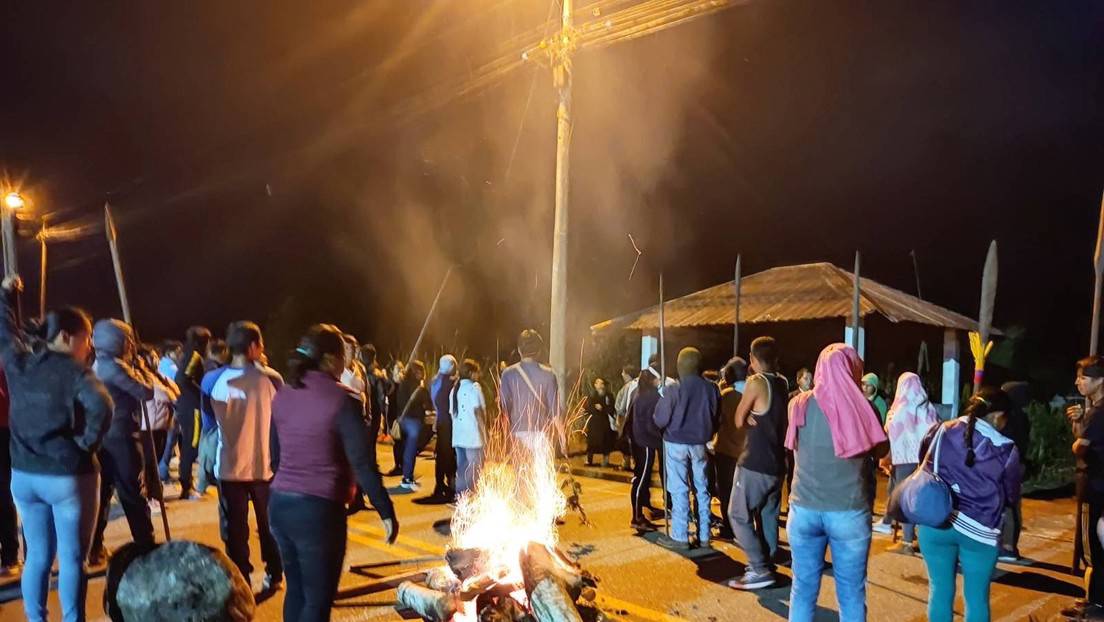 This Monday began in Ecuador an indefinite national strike called by the Confederation of Nationalities of Ecuador (CONAIE). The strike began with the closure of roads in different provinces of the three regions of the country: Sierra, Costa and Amazonía.

Monday afternoon, the Unión Nacional de Educadores (National Union of Educators – UNE) denounced that the Police had repressed the students of the Mejía National Institute of Quito who joined the national strike, reports RT.

«Gas, beatings on women and jail for students who demand access to university, budget and stop their neoliberal policy that raises the cost of living», reported the UNE about the actions of the Police.

From dialogue to protests

“The peoples and nationalities went to dialogues for a year with proposals, the government did not give answers, worse results“, they said from CONAIE, and they mentioned that there were ‘closed’ conversations on June 11, October 4 and November 10, 2021 without progress, which led to this national strike.

Leonidas Iza, president of CONAIE, in a message to the country, reported that with this new day of protests they resume the demands that they have made to the Executive during the last year.

He added that the duration of the protest actions will depend on the solutions offered by the Executive to their requests. “If today the President of the Republic [Guillermo Lasso] gives answers, then today we will lift [the strike]; if the president doesn’t answer any of the points, then, we stay indefinitely», he said.

Iza arrested in a «Illegal, arbitrary and illegitimate» manner

In the early hours of Tuesday morning, Leonidas Iza was arrested in the Lasso sector, near Pastocalle, in the province of Cotopaxi, in the centre of the country.

A video released by CONAIE shows how a group of police and armed forces officers forcibly remove Iza from a dark vehicle he was in, accompanied by supporters, and take him away, reports RT.

«The detention is illegal, arbitrary and illegitimate», said the Alianza por los Derechos Humanos de Ecuador (Ecuadorian Alliance for Human Rights), an ‘umbrella’ organisation of 15 organisations, in a statement, in which it points out that «his whereabouts remain unknown» and, as confirmed by the Attorney General’s Office, «he has not been presented before any competent authority in order to guarantee his right to legitimate defence and judicial protection».

It also indicates that during the proceedings, «he was not duly informed of the reasons for his detention or of his rights».

For the Alliance, Iza’s detention constitutes «a new state action of criminalisation and persecution of the right to social protest and mobilisation».

On behalf of the authorities, the police reported, in a brief statement issued after the arrest, that Iza was in a «temporary detention room, for a hearing on the qualification of flagrancy».

The Attorney General’s Office (FGE) of Ecuador reported on Tuesday morning that Leonidas Iza, president of the Confederation of Indigenous Nationalities of Ecuador (Conaie), has not been placed at their disposal.

The FGE made a statement more than eight hours after the arrest of the social leader, noting in its statement that it learned of the arrest by publications that were made «through social networks, informed RT.

The institution points out that, in addition to the fact that Iza has not been placed at their disposal, they have not received the respective police report to know the details that would have motivated the arrest.

«The state attorney general, Diana Salazar Méndez, has issued directives to provincial prosecutors to coordinate procedures and actions with the corresponding authorities, with the objective of avoiding illegal or arbitrary detentions», says the FGE statement.

CONAIE has presented a list of 10 demands that they consider urgent for the country. The organization reported that the petitions were delivered, on Monday, “formally”, to the Presidency. The petition includes:

1- Reduction and no more rise in fuel prices. Freeze diesel at $1.50 and extra gasoline and ecopaís at $2.10. Focus on the sectors that need subsidy: farmers, peasants, transporters, fishermen, among others.

2 – Economic relief for more than four million families with a moratorium of at least one year and debt renegotiation with a reduction in interest rates in the financial system (public and private banks and cooperatives).

3 – Fair prices for farm products: milk, rice, bananas, onions, fertilizers, potatoes, corn, tomatoes and more; no to the collection of royalties on flowers. The goal is that millions of small and medium farmers can have the conditions so that they can continue to produce.

4 – Employment and labor rights. Public investment policies to curb job insecurity and ensure the maintenance of the popular economy. Demand payment of debts to the Ecuadorian Institute of Social Security (IESS).

5 – Moratorium on the expansion of the extractive mining/oil border, audit and comprehensive reparation for socio-environmental impacts.

8 – Price control policies and of the speculation in the market for basic necessities.

9 – Health and education. Urgent budget in the face of shortages in hospitals due to lack of medicines and personnel. Guarantee access to higher education and improvement of infrastructure in schools, colleges and universities.

Regarding fuels, they demand to repeal decrees 1158, 1183 and 1054, issued by former President Lenín Moreno in 2020, which allowed the liberalization of fuel prices and the variation —mostly with an increase— in its value every month .

Regarding the mining and oil activity, they demand the repeal of decrees 95 and 151, issued by President Lasso in 2021. With the first, the hydrocarbon policy and an «Immediate Action Plan» for the development of the hydrocarbon sector were issued; while with the second the «Action Plan for the Mining Sector» was published. Several organizations have denounced that both decrees enable institutional channels to expand extractivism in the country.

The response of the Government of Ecuador

«We cannot allow political groups that seek to destabilize and ‘fish in troubled waters’ to paralyze the country again», said President Lasso in a message to the country, which was published an hour before the national strike began.

According to the president, who described the protest as «violent», a strike is the «worst» thing they can do in the country, when the economy is beginning to reactivate and the industry is trying to get out of the post-pandemic crisis.

The president asked the CONAIE leadership to «rethink» and respect the rights, such as free mobility, of the «vast majority».

«A strike divides us, just when we must unite to fight the real enemies: crime, drug trafficking and organized crime», added Lasso in his message.

Previously, the Minister of the Interior, Patricio Carrillo, commented that the mobilization, “in practice, is a week of blocked roads and oil wells, kidnappings of police and military, looting, etc. They will disguise it as a social struggle to provoke victimization».

The mayor of Quito, Santiago Guarderas, reported that they are working in coordination with the Armed Forces, the National Police and the high command of the Government to establish the strategies that will allow them to «defend» the city.

«We will defend Quito, we are not going to allow them to come and destroy our city», he warned.

CONAIE denounces that there is a «prepared repression» ongoing

Prior to the start of the protests, CONAIE had already issued a statement in which it warned of the «repression, violence and massacre» that, according to what it says, «the government of Guillermo Lasso has prepared».

«Dangerously, they seek to create an internal enemy, to implant a mediatic barrier, at the same time that they use the State intelligence apparatus to follow up on social leaders», says CONAIE.

In October 2019, during the Moreno government, there was a social outbreak in Ecuador that lasted from the 3rd to the 13th of that month and left 11 dead, 1,340 injured —including 11 people who lost an eye— and 1,192 detainees, according to data from the Ombudsman.