What is the «Alliance of the Americas» that Biden proposed for the «economic prosperity» of Latin America about?

"I'm announcing a new economic partnership that builds on all the work we've done with the region", Biden said.
Share 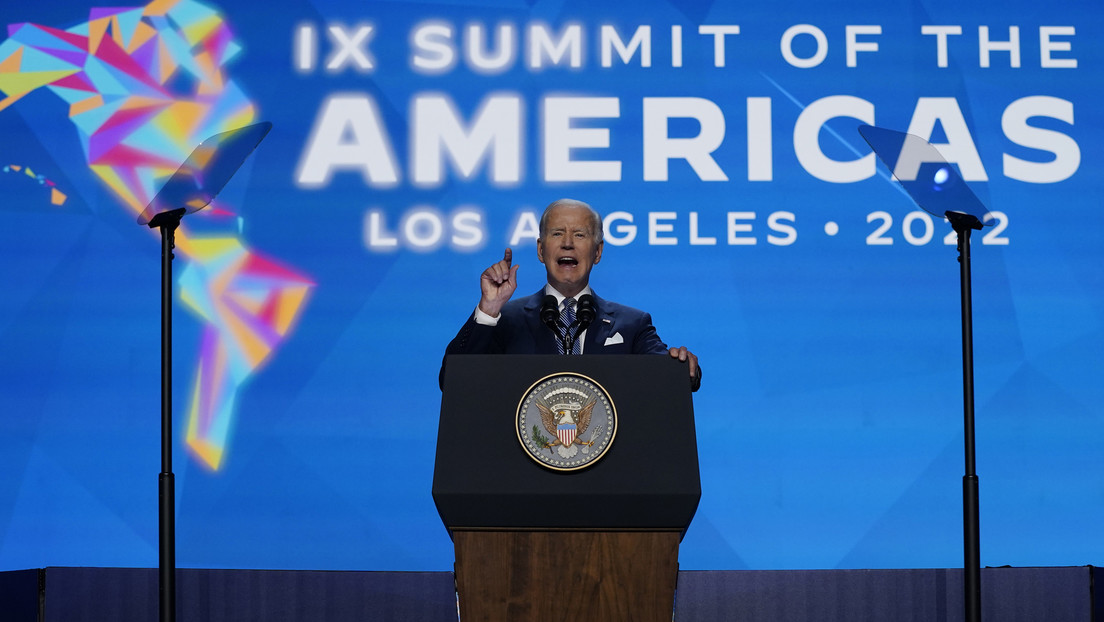 During the opening ceremony of the IX Summit of the Americas, held in Los Angeles (California), US President Joe Biden announced his proposal to create the Alliance of the Americas for Economic Prosperity.

“I am announcing a new economic partnership that builds on all the work we have done with the region and will guide our commitment in the future”, said the US president at the Microsoft Theater in Los Angeles, where the opening ceremony of the summit was held.

The announcement was made in an event that is marked by the exclusion made by the United States of some of the countries in the region, such as Venezuela, Cuba and Nicaragua, which provoked the solidarity of leaders of other States, who did not attend the summit, including the Mexican Andrés Manuel López Obrador and the Bolivian Luis Arce, reports RT.

In his speech, Biden added: «Together, we need to invest to make sure our trade is sustainable and responsible and create supply chains that are more resilient, safer and more sustainable».

In this sense, he pointed out that, first of all, this Alliance of the Americas for Economic Prosperity «will help economies grow from the bottom up and from the middle out, not from the top down».

With this, the president added, they will seek to increase opportunities and reduce persistent inequity.

Second – according to Biden – the alliance will «foster innovation and help governments deliver on their own people».

And third, the alliance will address the climate crisis by working, according to the US president, on the transition to a green economy, which includes the development and deployment of clean energy, decarbonization of the economy and protection of biodiversity; issues that – in his opinion – translates into «well-paid and high-quality» jobs.

The US plan also proposes to revitalize the Inter-American Development Bank (IDB), including with reforms. In this regard, Biden commented that the US is ready to contribute more capital to the bank’s private sector loans (IDB Invest), to help «capitalize on the critical flow of private capital to the region».

According to a Biden administration official, quoted by Reuters, the alliance is a platform with which they seek to counter China’s growing influence in Latin America. Thus, it will initially focus on «like-minded partners» with whom the US already has trade agreements.

The US Department of State, in a press release, also provides information on what the Alliance of the Americas for Economic Prosperity would be.

The institution defines the alliance as «a new historic agreement» to «promote the recovery and growth of the economy» in the hemisphere and offer results to workers.

The State Department reiterates – as Biden pointed out – that the US seeks with this alliance to deepen economic cooperation with its partners, strengthen supply chains, foster innovation in the public and private sectors, and address the climate crisis.

It reports that once the Summit of the Americas concludes, the United States will hold initial consultations with its partners in the hemisphere and interested parties on the following areas of interest:

The migration issue is not left aside in the plan, given the increase in people who move around the continent in search of greater opportunities. “We will work to support countries that host large numbers of migrants or refugees, or that want to make ambitious reforms that are in line with the objectives of the alliance”, says the State Department text.

«Safe and orderly migration is good for all of our economies, including the US. It can be a catalyst for sustainable growth. But illegal migration is not acceptable», Biden said at the ceremony.

The president announced that the Los Angeles Declaration, which will include the most important points of the summit and will be released on Friday, will include «a new innovative and integrated approach to managing migration and sharing responsibility throughout the hemisphere».

That, he said, will mean «a mutual commitment» to investing in regional solutions that enhance stability, increase opportunities for safe and orderly migration through the region, and crack down on human trafficking and criminals who prey on desperate people.

This migratory commitment, however, occurs in the absence of the leaders of El Salvador, Guatemala and Honduras, who have declined to attend the meeting and who represent three of the countries most affected by emigration, as well as the president of Mexico.