From love to hate! Moro attacks Bolsonaro and threatens with worst things 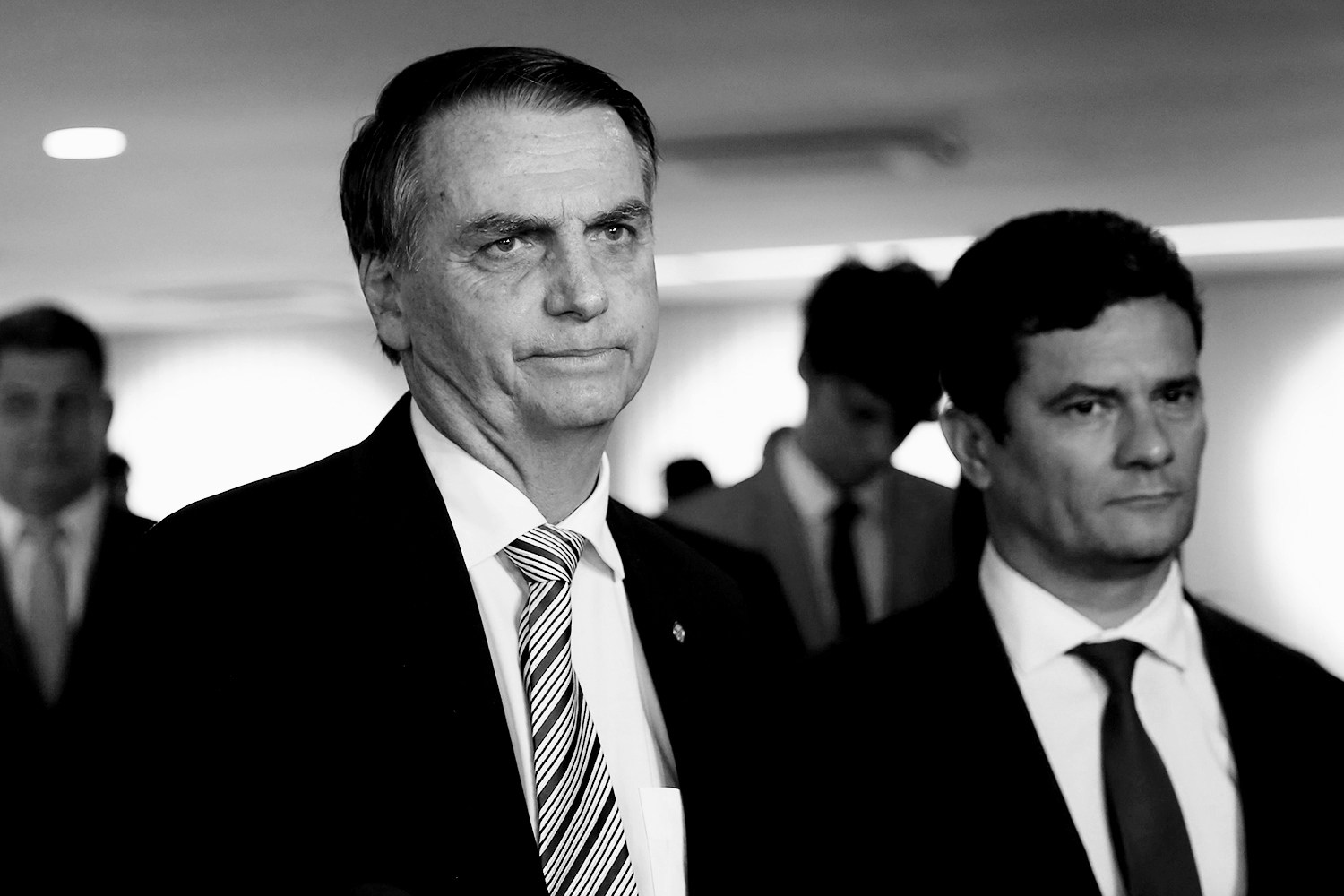 The resignation of the Brazilian Minister of Justice, Sergio Moro, fueled the strong political crisis that the Government of Jair Bolsonaro is going through, among other reasons for his criticized handling of the coronavirus pandemic in the South American nation.

Moro resigned at an explosive press conference in which he accused the far-right president of obstructing and interfering in investigations by the Federal Police (PF) and the Supreme Federal Court (STF).

The ‘poisened darts’ of the former federal judge also suggest possible crimes that could be under the responsibility of the Head of State, which would enable the opening of a political trial in Congress.

During the last months, the Brazilian press has been warning about the friction between Bolsonaro and one of his key ministers in order to implement his conservative policies, especially those related to issues concerning security and justice.

The nation’s newspapers echoed the suspicion of the President, whose popularity is on the ground according to the polls, before the media notoriety that the figure of Moro was taking, who has tried by all means to position himself as the anti-corruption gendarme.

Moro, who was the judge of the Lava Jato case and imprisoned – without evidence – former President Luiz Inácio Lula da Silva, today released, was chosen as one of the 50 world personalities of the decade by the Financial Times newspaper, which serves the interests of the world’s right wing sectors, something that according to the media was not to the liking of the Brazilian President.

Despite the fact that last year his reputation was tainted by the leak of messages that questioned his impartiality in the judicial process against Lula, Moro has 50% approval, while Bolsonaro’s barely reaches 30%.

The last straw for Moro was the dismissal of the director general of the Police, Maurício Valeixo, published during the morning of Friday April 24 in the Official Gazette, despite the fact that Moro, his hierarchical superior, had not signed the decree.

“I have no way to keep the commitments I made, without working conditions, without been able to preserve the autonomy of the Federal Police”, Moro told the press.

“It was clear that the President does not want me to continue in office”, he added, assuring that the extreme right-wing President had violated the agreement that they had reached, that gave him “carte blanche” to nominate the police authorities.

Valeixo was one of the main collaborators of the now former minister since the Lava Jato operation, and Bolsonaro had already tried to replace him last August. According to the media, Moro had held talks in recent days with military ministers to avoid the expulsion of the commissioner.

At the press conference, he revealed that the Head of State seeks to control police investigations for political reasons.

“He told me that he wanted to place a person with whom he had personal contact, whom he could call, request information and intelligence reports. Providing this type of information is not the role of the Federal Police”, he denounced.

In his statements, he defended his personal integrity and insisted that “the autonomy of the police” had been key to spearheading the fight against corruption, drug trafficking and organized crime that led to a “significant decrease in crime in 2019”.

He stressed that he accepted to be Bolsonaro’s minister to “deepen the fight against corruption”, and made it clear that his resignation was due to the intransigence of the President.

“Find a solution to avoid a political crisis in the middle of a pandemic”, he said to the President in his public statements.

Bolsonaro did not remain silent and on the same Friday he appeared surrounded by his ministers as a sign of support in the face of the political crisis, to indicate that the decision to remove Valeixo was a resolution taken jointly with Moro, and denied any type of interference in the Federal Police.

He indicated that he guaranteed Moro the autonomy of the dependencies under his power, including the Federal Police, but stressed that “autonomy is not synonymous with sovereignty”.

Although he claimed to be “very sad” about the resignation, he did not hesitate to lash out at his former minister, calling him an egomaniac and opportunist who had questioned his authority.

“He was an idol. I knew it wouldn’t be easy. It is one thing to admire someone, another is to live with them. Today I met that person committed to himself, with his ego and not with Brazil”, he said, quoted by El País.

However, he stated that it will be “a difficult task” to find a replacement “committed to the future” of Brazil.

Complicity between Moro and Bolsonaro

Beyond the friction, Sergio Moro and Jair Bolsonaro, maintained a close relationship. In fact, the former minister was key for the extreme right-wing leader to come to power.

The former judge ordered Luiz Inácio Lula da Silva to be detained without evidence in 2017 and, with the collaboration of generals and judges, prevented his candidacy in 2018 – when he was the favorite to win – to thus benefit Bolsonaro.

In the middle of last year, The Intercept revealed the illegal maneuvers that he applied together with the Lava Jato prosecutors to imprison Lula, who remained locked in the dungeon of the Superintendence of the Federal Police in Curitiva for 580 days.

Moro obstructed the investigations into the murder of the activist Marielle Franco, which occurred in 2018, and in which the name of Jair Bolsonaro and his clan came to light.

His interference, from the Ministry of Justice, to hinder the open case against Flavio Bolsonaro (son of the President), for possible money laundering in an association with an adviser linked to the paramilitary “militias”, was also news.

Determination to control the Police

According to the media, Bolsonaro is determined to take direct control of the Federal Police for various reasons. The most recent are the investigations opened in the STF on the undemocratic act that the President carried out in front of the Army Headquarters in Brasilia to request the intervention of Congress and Justice and in which he dared to affirm: «I am the Constitution».

The interference of the President in the work of the Federal Police happens just when the press reported a series of investigations to his sons, federal deputy Eduardo Bolsonaro and federal senator Flavio Bolsonaro, for diverting public funds to finance dirty social media campaigns against his political rivals and journalists.

Is an impeachment looming?

Nor can we forget the 24 requests for impeachment against Bolsonaro that for now remain stored in the drawers of the Presidency of the Lower House.

A few weeks ago, Supreme Court magistrate Celso de Mello demanded the head of the Lower House, Rodrigo Maia, to rule on the impeachment requests, which should be removed from the ‘drawer’ and thrown away or put to a vote.

Moro’s accusations suggest possible crimes of responsibility for the Head of State and could be the key point for the opening of a political trial in Congress against the President.

Some analysts point out that, with his continuous provocations and his criticized handling of the pandemic, which in Brazil already registers more than 50,000 cases and 3,300 deaths, Bolsonaro himself would be interested in being subjected to impeachment.

“Bolsonaro wants an impeachment process because he saw that it strengthened Donald Trump in the United States and gave him the victim’s speech, of someone persecuted by the political establishment and the system”, said Dawisson Belém Lopes, professor at the Federal University of Minas Gerais.

“Moro’s departure will probably promote the clamor for an impeachment, a possibility that Bolsonaro encourages day by day”, said journalist Leandro Dario, in an article published by Perfi.

The ex-judge’s departure weakened the President, after he fired the Health Minister, Luis Henrique Mandetta, for the official’s support for the confinement ordered by most of the states, a measure that has been rejected by Bolsonaro.

Additionally, Moro was considered one of the representatives of the moderate and technocratic wing, as opposed to the ideological wing that Bolsonaro and his sons represent, so “his departure awakens in investors the fear that the Government will end up losing its way”, reported Reuters.

According to the media, Moro’s resignation also influences the military, who are increasingly gaining more power within the government, having 2,897 uniformed in state positions, who are evaluating their relationship with Bolsonaro.

According to the Folha de Sao Paulo newspaper, one of the options on the table of the military leadership is to withdraw its support for the current President.

With the dismissal of the director of the Federal Police, the military “were betrayed by the President’s modus operandi”, said journalist Igor Gielow.

According to the newspaper, Moro’s resignation also “shocked” the uniformed personnel, denouncing the “political interference” of the President in judicial matters.

The newspaper adds that in a conversation about attempts to maintain governability, the military said the next Minister of Justice should be a lawyer with a faultless reputation and no political connections.

However, it emerged that the President wants one of his trusted men, the current head of the General Secretariat of the Presidency, Jorge Oliveira, to replace Moro. The other name being considered is that of the Federal Attorney General, André Mendonça, who is also close to Bolsonaro.

The truth is that Moro’s resignation is bringing headaches to Bolsonaro, who is going through the most delicate moment in his 16 months in power.

The Sao Paulo Stock Exchange reacted with a historical fall and the official currency, the real, depreciated sharply against the dollar.

Additionally, thousands of Brazilians star in “cacerolazos” in the main cities of the country, and the cries of “Fora Bolsonaro” are heard louder and louder, every day, from the windows of the buildigs and houses in the cities of Brazil.