What are the challenges that the new CNE of Venezuela will take on?

The new CNE directive is ad hoc and its functions will end on January 5, 2021, the date on which a new National Assembly should be installed
Share 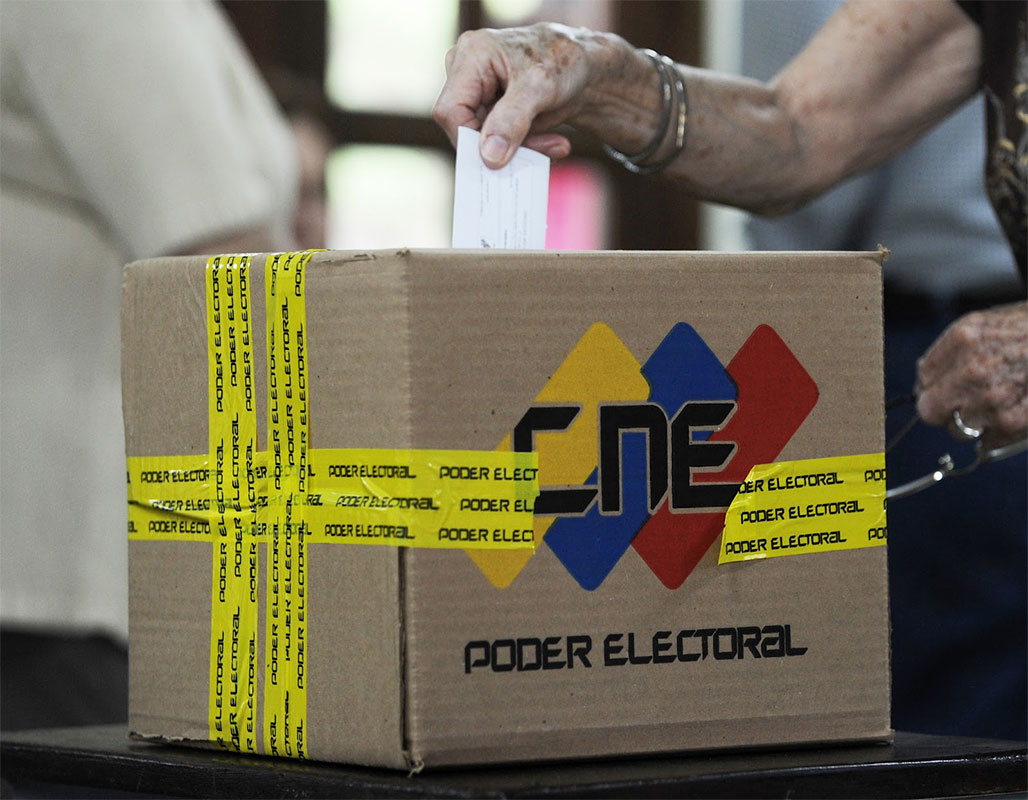 The new directive of the National Electoral Council (CNE) of Venezuela must fulfill the mission of convening the elections to elect the new members of the National Assembly (AN), whose mandate expires on January 4, 2021.

With this action, the entity will contribute to the strengthening of the venezuelan democracy, by guaranteeing the right of Venezuelans to participate in plural and transparent parliamentary elections, which promote dialogue and understanding between the different political sectors of the country.

The appointment of the members of the new CNE was a process that lasted more than a year through negotiations between the opposition and the Government, which included the installation of a National Dialogue Table.

Although progress was made on some points, in early 2020 the right wing opposition began to put obstacles in the appointment of the electoral rectors, which raised the need to take other actions in accordance with the laws and the Constitution.

The Constitutional Chamber of the Supreme Court of Justice of Venezuela (TSJ), and prior to declaring the unconstitutional omission of the AN, proceeded to designate the new rectors of the CNE, by means of the judgment No. 0070-2020, on June 12.

Also, other bodies subordinate to the CNE, which are the Civil and Electoral Registry, are chaired by rector Tania D’Amelio Cardiet, and as Principal rector Gladys María Gutiérrez Alvarado, as alternate rector Juan Carlos Delpino Boscán; while the Commission for Political Participation and Financing is chaired by Rafael Simón Jiménez Melean; As principal rector Tania D’Amelio Cardiet, and alternate rector incorporated Abdón Rodolfo Hernández Rodríguez.

Incapability of the National Assembly

The Venezuelan Constitution gives the AN the power to elect the CNE, but in the face of various irregularities, the TSJ had to assume that responsibility. Parliament was declared in contempt by the TSJ through decision No. 02 of January 11, 2017, due to its refusal to revoke the swearing-in of three deputies suspected of committing fraud.

Faced with the breach of said mandate, the highest court in Venezuela delegitimized Parliament and declared null and void all its acts until it resumed the path of legality.

According to Venezuelan law, if Parliament violates some of the norms established for that process or is not in legal conditions to assume the appointment procedure for the electoral rectors, then it is up to the TSJ to select the members of the electoral body.

For this reason, on June 5 the highest court published judgment 0068-2020, in which it declared that there was a legislative omission on the part of the AN and that its work of appointing the CNE rectors was hampered.

A request of the Opposition

On that occasion, the Secretary General of MAS, Felipe Mujica, explained that the objective of the request, based on Article 336 of the Bolivarian Constitution, was to be able to settle the conflict for the election of the new CNE, whose process had been extended by one year.

He recalled that a document was approved at the National Dialogue Table that established the incorporation of the parliamentary fraction of the Government into the National Assembly so that an electoral body would be chosen together with the opposition caucus.

«That went nowhere. A commission was appointed that did not operate and later the crisis of January came, when the National Assembly was divided and that decreed the impossibility that in that organism the decision to elect the CNE could be made, because to be elected it requires 2/3 of the members of this organism», he explained.

For this reason, he stressed the importance of the TSJ appointing the CNE directive to guarantee compliance with the legal deadlines for conducting the legislative elections.

«Elections in accordance with the constitutional norm clearly establish that in order to convene these legislative elections it takes six months and for that to be accomplished we have to have an electoral body that does it differently from the one we currently have», he said.

While the leader of Solutions for Venezuela, Claudio Fermín, explained that in the face of the policy of the right-wing sectors that support the deputy Juan Guaidó, who play the abstention card, his party and others that make up the National Dialogue Table, agreed to request the legislative omission statement.

On June 9, during its ordinary session, the National Assembly downplayed the ruling of the TSJ and assured that it would keep the Nominations Committee they appointed to elect new CNE rectors in office.

Subsequently, the Constitutional Chamber of the TSJ ordered this Electoral Nominations Committee to deliver the list of those pre-selected as rectors to the Electoral Power, for which they were given a term of 72 hours that was not complied with by Parliament.

In this scenario, the highest court had to declare the legislative omission of Parliament to take over the appointments.

The Constitution includes in its article 336, that the Constitutional Chamber of the TSJ, among other functions, has the function of «declaring the omissions of the municipal, state or national Legislative Power to be unconstitutional when it has stopped dictating the norms or measures essential to guarantee the compliance with this Constitution, or have issued them incompletely; and establish the term and, if necessary, the guidelines for its correction ”.

Based on this power, the TSJ Constitutional Chamber ruled on its power to assume legislative functions, due to the impossibility of the AN in contempt.

It is an exceptional power, which is established only in cases of unconstitutionality and when the restitution of legality depends on the agility in the decision.

In this regard, the constitutional lawyer Hermann Escarrá, indicated that the appointment of the rectors of the CNE by the Judiciary is a reaffirmation of what is stated in the Venezuelan Constitution.

«This is not the first time that the Judiciary intervenes constitutionally in the face of omissions by the Legislative Power», he recalled in statements to Venezolana de Televisión (VTV).

Escarrá highlighted that the choice of the CNE rectors is a palpable demonstration of how constructive the dialogue has been in the country and expressed his confidence that its work will contribute to settling political differences, through peace and the exercise of democracy.

«It is a cry from the people to get out of that conflict in which the parliamentary majority declared itself and outside the margins of the Constitution. I believe that it is the path to peace through dialogue, which will allow Venezuela to offer a positive result so as not to continue creating conflicts”, he said.

In this sense, he expressed that the new National Assembly must be installed in an election process that should take place between November and December, so that on January 5, 2021 a new Board of Directors of the legislative power and a new legislative period take over.

Challenges of the new CNE

The new CNE directive is ad hoc and its functions will end on January 5, 2021, the date on which a new National Assembly should be installed.

For this reason, the newly appointed rectors must call the parliamentary elections and adjust the procedural conditions for those elections.

One of the guidelines dictated by the Constitutional Chamber to be taken into account by the new CNE is the incorporation of political pluralism to allow organizations that do not have the support of the majority, to obtain representation within the Legislative Branch.

In judgment 0068-2020 issued on June 5, the highest court also considered it appropriate to adjust the number of deputies to the National Assembly based on the demographic growth experienced in the country, so that parliamentary representation should be proportional to the number of inhabitants of the country, in accordance with the figures and projections of the national census, reported the newspaper Últimas Noticias.

The TSJ instructed the CNE to develop a new regulation that allows proportional representation «that all votes are taken into account, including those that do not form part of the majority of electoral preferences».

According to the newspaper, the Constitutional Chamber ordered the application of articles 174 to 186 of the Organic Law of Indigenous Peoples, which establish the election of three deputies representing the aborigines in Venezuela. In the newspaper’s opinion, this system does not take into account the cultural specificities of each of the groups.

The road to elections

After the appointment of the new CNE rectors, the path is open for the holding of the parliamentary elections in Venezuela in late 2020.

Segundo Meléndez, national president of MAS, expressed his confidence that the recently appointed electoral body will comply with «transparency, impartiality and efficiency in the task entrusted to it», which will translate into «maximum participation by the society».

He stressed that sectors of the opposition consider that «the way out of the crisis is the electoral route through democracy».

The new president of Acción Democrática (AD), Bernabé Gutiérrez, stated that they went to the TSJ to ratify the party’s decision to go to the parliamentary elections, as they had agreed in January 2020.

Likewise, Ferdinando Spano, president of Copei in the Aragua state, celebrated the appointment of the new CNE directive and guaranteed the commitment of his party to participate in the parliamentary elections, which according to him should be held next December.

The President of the Bolivarian Republic of Venezuela, Nicolás Maduro Moros, indicated that a good part of the opposition, in bloc, has announced that it will participate in the parliamentary elections, and reaffirmed that extraordinary guarantees are being given for the participation of all political sectors.

«Nothing and nobody can stop this process, Venezuela says yes to the votes, no to the bullets, yes to the elections, no to the guarimbas, yes to democracy, no to intervention», said the also president of the United Socialist Party. from Venezuela (PSUV- Partido Socialista Unido de Venezuela).

During a videoconference with the national leadership of the PSUV, he asked the party for a model of candidates extended to all social sectors of the country, with the aim of guaranteeing the transformation of the National Assembly, currently in contempt.

Maduro urged the establishment of new popular alliances and a political organization that opens itself to the «grassroots leaderships». At the same time he assured all that «Venezuela wants a National Assembly at the service of the country in defense of the nation’s rights, a plural, democratic National Assembly».