When asked about the possibility of deleting his Twitter account, he replied: "If we had an honest press in this country, I would do it in a second"
Share 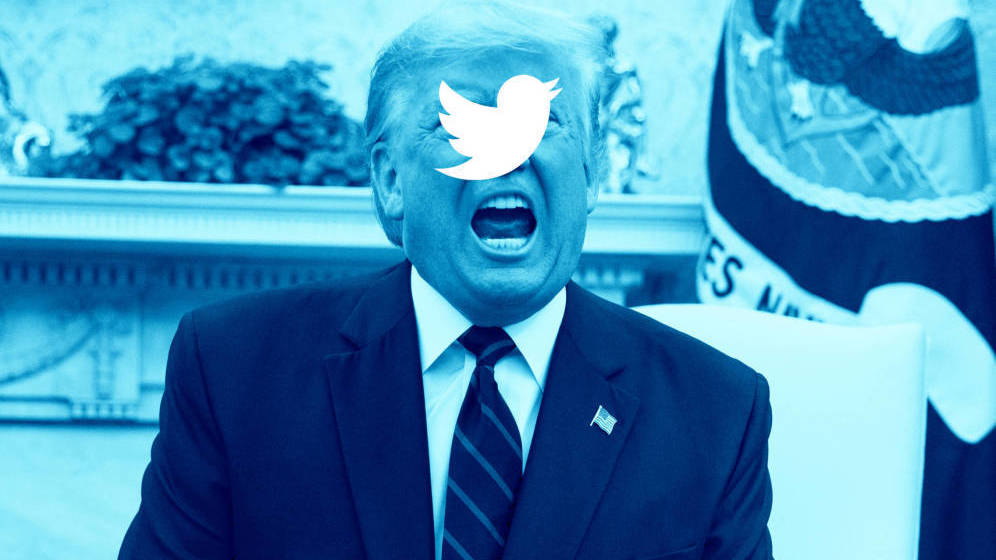 In the midst of a deep political crisis, Donald Trump declared war on Twitter. The President of the United States signed a decree on Thursday to limit the protection of social networks and the laxity they enjoy to publish contents.

«We are here to defend freedom of expression against one of the worst dangers», said the Republican president, referring to what he called the «monopoly» of the technological giants.

«They have the uncontrolled power to censor, edit, hide or modify any form of communication between individuals and large public audiences», explained Donald Trump when signing the controversial decree, which opens the door to a battle in the midst of the health, economic and political crisis from the effects of the COVID-19 pandemic and six months before the presidential elections.

Very active on Twitter, where he publishes political announcements, personal attacks, conspiracy theories and statements, the White House tenant has long been denouncing an alleged ideological and political bias by the social network. «We cannot allow this to continue, it is very, very unfair», he said.

Decree against freedom of expression

The decree regulates section 230 of the Communications Decency Act of 1996, pillar of the operations of digital platforms.

«The decree would modify the scope of this law and allow regulatory authorities to decide on content moderation policies», reported the Chicago Tribune newspaper.

The extreme right-wing leader accuses Twitter of making «editorial decisions» and showing «political activism» in choosing the messages it decides to send for verification. While his detractors reproach him that he does not act in the name of freedom of expression, but for his own interest.

According to Democratic Senator Ron Wyden, Trump threatens Section 230 to «intimidate» social media. «I believe that these companies, and all Americans who exercise their right to express themselves online, will resist this illegal decree in every possible way», he condemned.

The messages of discord

Twitter, which has been branded negligent in dealing with the comments of certain politicians, published in two Trump messages, for the first time, the mention: «Verify the data».

There were two tweets in which the President stated that voting by mail was necessarily «fraudulent» because it is subject to manipulation.

In response, the social network classified the messages as «misleading» and edited them by adding the link to find out the true facts about voting by mail at the end of each text. «These tweets contain potentially misleading information about the voting process and have been reported», said a spokesperson for the social network.

Outraged, Trump added fuel to the fire and posted that it was «ridiculous» and «stupid» for Twitter to claim that there was no fraud in the vote by mail.

The truth is that numerous research papers, including those of the Brennan Center for Justice, have suggested that the potential for electoral fraud (or illegal voter registration) in voting by mail is less than 0.0025%, a very small possibility. to be addressed as a factor that could alter a result.

Despite the declared war, Trump has 80 million followers on Twitter and does not plan to give up participating in the social network.

When asked about the possibility of deleting his Twitter account, he replied: «If we had an honest press in this country, I would do it in a second».

Twitter, however, cracked down on other controversial messages recently released by the US President.

On Friday, it accused the President of violating the rules of use of the platform for «extolling violence» in one of the messages he published suggesting a military intervention in the Minneapolis riots due to the vile and unjustified murder of an African American by a white police officer.

Rather than blocking the message, the social media team led by Jack Dorsey made it visible because its «public interest», but attached a warning: «This tweet violated Twitter’s rules on extolling violence».

“… These THUGS are dishonoring the memory of George Floyd, and I will not allow that to happen. I have just spoken to Governor Tim Walz and I have told him that the Army is at his full disposal. Any difficulty and we’ll take over but when the looting starts, the shooting starts. Thank you!”, reads Trump’s tweet in which he opened the door to the possibility of the military taking to the streets and using weapons.

Since his 2016 presidential campaign, Twitter has become Trump’s quintessential media outlet. Through this network he communicates most of his reflections, insults, disqualifications and government policies.

The extreme right-wing US President distrusts the “manipulative press”, and uses Twitter to reach his followers directly, without intermediaries or filters.

Although this platform seems to be his new enemy, the White House’s tenant does not want to stop publishing there, so the decree is seen by analysts as a new smokescreen in the midst of the pandemic.

«It is a measure of pressure to officialize a new ‘foreign’ enemy, following populist theories, and to justify that he is always the victim. If he left Twitter, he wouldn’t find any important enough alternative. Trump wants to feed the polarization of his voters in the networks. He cannot abandon them”, said the Spanish analyst and communication advisor Antoni Gutiérrez-Rubí, in an article published by El Periódico.

The tycoon needs a theme that will serve to generate controversy. Averages in national polls, as well as in key states for the presidential election, show favorable margins for Democrat Joe Biden.

Likewise, the polls show that the vast majority of the population also disapproves of his actions in the face of the crisis of the COVID-19 pandemic, which has left more than 100,000 dead and 40 million unemployed in the United States.

Luis Tejero, director of public affairs of the communication agency and consulting firm Grayling, the Republican has shown that he is a master in the art of distraction, because unlike other politicians who leave their official profiles in the hands of assistants, he takes his activity in the social networks as something personal.

«With just 280 characters, he is able to guide public discussion and establish the topics that newspapers, television, radio and, of course, his rivals must inevitably talk about. If the controversy with Twitter serves to divert attention from the coronavirus for a few hours, it is welcome for his interests”, he said in an article published by the newspaper La Razón.

“Everything is useful to divert the conversation about his performance during this health crisis. Last week it was China and Obamagate, now it is Minneapolis and Twitter. The blame is always on the others and Trump is a candidate who needs verbal anger and digital mud, that’s why he has published almost 50 thousand tweets», explained Antoni Gutiérrez-Rubí.

Twitter has also been the subject of accusations for entering into the war with Trump. Some analysts wonder if every time politicians publish dubious information in their official profiles, will the social network take on a corrective role to warn of possible falsehoods?

They also question whether from now on, or at least until the November elections, this criterion will be applied to all Trump’s messages and if the same rule will also apply to the Democrat Joe Biden.

The truth is that this social network needs the presence of political leaders to keep the discussions active. «Without Twitter users there is no Twitter», said Tejero, who argues that in a way, both sides (Twitter and Trump) need each other even if they look at each other with suspicion.

According to a 2017 published study, without Trump, Twitter could lose almost a fifth of its value. James Cakmak, analyst at Monness Crespi Hardt & Co., stated that the President could be worth, for Twitter, around 2 billion dollars, so the company would lose that market value if the user @realDonaldTrump stopped tweeting.

For this reason, the outcome of the events is expected, because a law against social networks does not only affect Twitter, but a business with millions in income. Twitter, Facebook and Instagram earn hundreds of millions of dollars by advertising candidates during election campaigns.