Ingrid Gómez: Chronicle of the frustrated femicide that shocked Venezuela

Ingrid Gómez is a young 20-year-old student who was brutally assaulted and sexually abused by her ex-boyfriend, José Luis Da Silva
Share 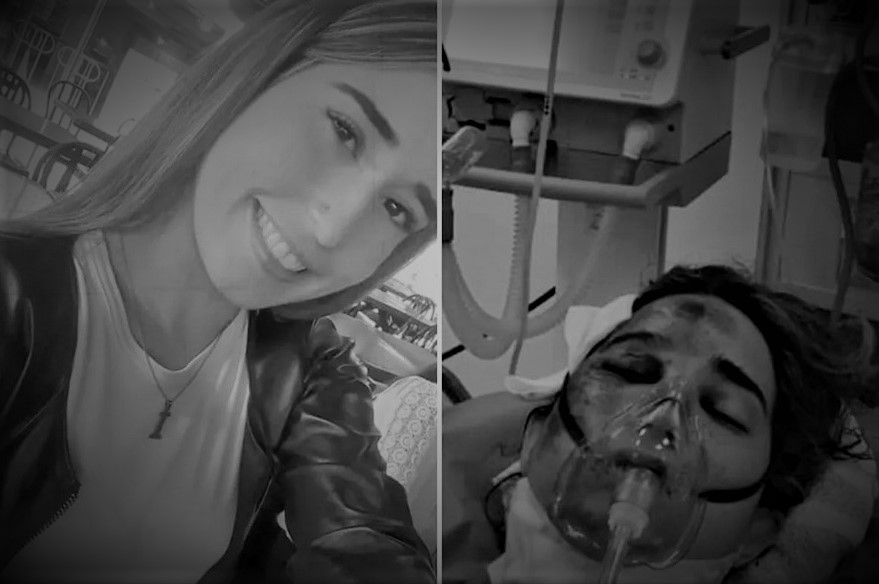 Ingrid Gómez is a young 20-year-old student who was brutally assaulted and sexually abused by her ex-boyfriend, José Luis Da Silva. After one year of dating, they broke up on “good terms” and agreed to remain friends.

While recovering in bed, Ingrid confessed the violence she suffered at the hands of this criminal, today deprived of liberty. Da Silva was captured in ‘flagrante delicto’ by members of the National Guard, a military component of the Venezuelan Armed Forces.

The young woman was the victim of physical, psychological and verbal attacks by Da Silva. In recovery, she offered an interview to Impacto Venezuela, where she told everything that her ex-partner did to her. Although the relationship had ended two years ago, she indicated that Da Silva never accepted that decision.

Ingrid is convalescing in bed as a result of severe blows, fractures to her leg and burns to her buttocks. These physical injuries hardly reflect “some of the suffering” that she carries within her, after the gruesome scene of terror that she was forced to live. She even admitted that she still can’t sleep in peace.

“He has been my ex-boyfriend for two years. Eventually he wrote to me and wanted to talk to me”, Ingrid confessed. In the interview, she commented that the two were “in the plan of friends”, after breaking up a one year relationship.

The day of the frustrated femicide began when Ingrid had the urgency to go to a pharmacy in Caracas. While chatting with her ex-boyfriend on the phone, he offered to drive her in his car. She trusted who she believed to be her friend and agreed to the car ride.

José Luis had everything planned

“I just went. When we were on our way to Farmatodo (a chain of pharmacies) he told me: ‘You are not going to go home, you are going to stay with me”. With that threatening phrase began the fateful day for Ingrid. Today, she says she never imagined the brutality that awaited her at the hands of someone who once claimed to love her.

Ingrid immediately refused. “No, I have to work, I have to go home. I did not ask permission at home”, she replied. But, José Luis was determined to do everything necessary to fulfill his mission.

In the middle of the discussion, the young student claimed that he had no right to make such a proposal or to decide for her. However, the aggressor insisted: “It has to be this way because you have to be with me”, he responded obsessively and compulsively.

José Luis had everything planned. He was going to abuse Ingrid on the night of Sunday, December 13, if she didn’t grant his wishes. He took advantage of his ex-girlfriend’s urgency to offer her a ride in his car that he knew would end in something else.

The moment of sexual abuse

This is how, in the middle of the discussion, with premeditation and clear psychopathy, José Luis urged Ingrid to calm down. He told her to drink some water because he felt she was “too anxious”.

“Well, I took it (the water). After a while – I don’t know when – I fell asleep. When I woke up, I couldn’t feel my hands or my feet and I started to see everything blurry”, said the victim. Unfortunately, by that time, she had already been sexually abused by her “friend”.

“I did everything I had to do for you to be with me”, confessed José Luis about the atrocity he had just committed. In short: he had raped her.

In the midst of the abominable confession, Ingrid says that she was not even able to ‘rekindle’ her consciousness. However, fear helped her draw the strength to resist the man’s attempts to continue touching her. For this reason, the aggressor decided to beat her and suffocate her to try to subdue her.

“Ingrid, if you answer your mother’s call, we will kill ourselves”

At that moment, Ingrid’s cell phone rang. It was her mother, who, surely worried about her daughter’s absence, began to try to locate her. “If you answer your mother’s call, we will kill each other”, threatened the rapist turned homicide. Meanwhile, he continued driving on the new highway to El Junquito, a mountainous town in Caracas.

Ingrid didn’t answer. Although she was doped by the water that José Luis gave her, she remained alert. After a while, she saw an exit when she observed a National Guard checkpoint that was on the side of the road.

The young woman says that when she was near the checkpoint, she decided to call for help and even do something else. “When I saw the guards, first,I called for help and – since I didn’t see that they were very aware – I jumped out”.

José Luis saw Ingrid’s evasive action and without leaving the wheel, he managed to grab her by her hair and accelerate the vehicle at full speed. But, Ingrid had most of her body on the pavement and was trapped between the car door and the asphalt.

“I was rolling all over the asphalt, I lost consciousness and I don’t remember what happened”, she said. José Luis’s anger was uncontrollable and since he could not continue driving, he got out of the car. Immediately afterwards, he broke a bottle and set out to kill the woman he claimed to love. He started stabbing Ingrid in the neck with the sharp edges of the broken bottle.

In the midst of that terrifying scene – fortunately for Ingrid – the members of the National Guard arrived. Their actions prevented that man – disguised as a friend and who had kindly offered her help – from murdering her.

After being caught in ‘flagrante delicto’, Da Silva was charged with the crime of ‘frustrated femicide’. The Prosecutor’s Office sent him to the Aragua Penitentiary Center, a place popularly known as the Tocorón prison. The case is still under investigation by the Public Ministry, an entity that must determine the imputation of other charges, after the statements of his victim.

“I didn’t believe it. I didn’t think this was going to happen. It hurt a lot”, Ingrid confessed about the feeling she carries within herself. What hurts her the most is that she never thought or imagined how, a person she thought she knew and with whom she had a bond of beautiful feelings, could go that far. In the midst of the torment, she thanks God for being alive and, above all, because she hopes that justice will be done.